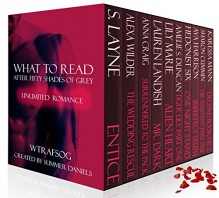 Make sure to check out our other WTRAFSOG Box Sets here: http://amzn.to/XWaILq

This great collection features ten fantastic reads that take Romance to the limit.

Entice by S. Layne -- Distracting, sexy, and British, Liam Parker offered Laurie exactly what she needed when she was still trying to heal from learning of her husband's affair. One night of pleasure. She wanted it. She craved it. She took it.

The Wedding Rescue by Alexa Wilder -- Leigha Carmichael needs a date for her sister's wedding. Dylan Kane is willing to play Prince Charming, for a price. Sparks fly, but when the weekend is over, will Dylan be able to let Leigha go?

Surrendered to the Pack by Anna Craig -- Sassy virgin Cassandra Wakefield is about to be sacrificed to a hot pack of wolf shifters—including their broody, always-in-control, very sexy alpha Trevor Reginald. Initiating the lovely Cassandra into the pack stirs something dangerous in Trevor he fights to deny. Because Cassie and all the wolf shifters are in for a shocking revelation—one Cassie might not survive after she is surrendered to the pack.

Mr. Dark by Lauren Landish -- Medical student Sophie White is working two jobs to pay for her college tuition. But when she meets the handsome, dark and mysterious Mark, she is thrust into a world that she never knew existed.

Alien Heart by Lily Marie -- Loving this alien could cost her everything ... Anji Pearce is just days away from freedom - her work bond paid off, and her life ahead of her. Until a gorgeous, sexy alien boards her ship and turns her carefully planned life upside down.

Tiger Lily: Part One by Amelie S. Duncan -- What started as an assignment became more than Lily Salomé could have ever hoped for. Dark, dangerous and mouthwatering, Jonas Crane has written a book about life in the fast lane and with the recent publicity, Lily's boss wants the rights.

One Night Stand by Hedonist Six -- Lucy is used to having a handle on things herself: her business, which she’s fighting to turn around after a rough patch, and her love life, which consists of carefully conducted casual encounters during which only she calls the shots. A one night stand with George, the irresistible tall, husky, rough biker whose deceptive exterior hides a gentler side, changes everything.

Imperfect Truth by Ava Harrison -- I’m a blogger. He’s a writer. He was my weakness. I was his muse. Once upon a time my marriage was built on love ... Until it wasn’t. Where had we gone wrong? I had given up hope … But then he messaged me and his words intoxicated me. Made me believe in love again.

His Assistant: Part One by Sharon Cummin -- The one person I loved most in the world was gone. What was I going to do? I had given up the last two years to take care of my mom and be with her until her last breath. She was my best friend. At twenty-one, I was going back to school. One thing I didn't need were distractions. Then he came along.

Deceive: Book 1 & 2 by Karessa Mann -- She told him her name was Scarlett, because the truth had no place between them. He'd be gone by morning and all that would be left are spine-tingling memories of the seductive night she'd spent in a stranger's arms. But at the Knight Hotel there's no such thing as an innocent one night stand.

Through Her Eyes - Ava Harrison