Log in with Facebook
or
Wrong email address or username
Sign up
Already on BookLikes? Log in!
Incorrect verification code
Please, check your email, the code to access your BookLikes blog was sent to you already.
Enter code:
« Back Send
back to top
Search tags: Caressed-by-Ice 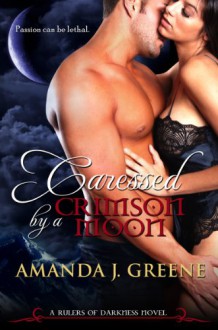 Caressed by A Crimson Moon is the third book in the Rulers of Darkness series. It tells the story of Eva a half-breed shifter and Hadrian Lucretius, the mad vampire king of the Validus Clan.
Eva is considered an abomination to her pack because of her half-breed nature. She lived in the world of humans until the death of her mom when her father took her to live with his pack. Eva’s treatment by the pack was unpleasant. Unable to take animal form or have children her pack treated her like a pariah. The pack had an agreement with the vampire clan, where the alpha would send one of his daughters to be a ward to the vampire king. Because of the madness that had consumed the king the alpha decided Eva would be the perfect candidate, believing the vampire king would have her destroyed.
Hadrian is known as the beast among vampires, the mad king. Haunted by a past riddled with torture, death and blood-lust he descended into a state of madness, which saw him renouncing his throne.
He has returned to claim it after 350 years of self-imposed exile, thus triggering the death curse. A curse which would eventually kill him should he not find his mate.
From the moment Eva and Hadrian met, sparks flew. Eva had difficulty keeping her distance despite humorous warnings from Falcon, Hadrian’s second in command. Hadrian tried resisting the attraction out of fear and he did not desire to disrespect her pack. She is his ward and therefore under his protection, but when information regarding Eva’s heritage became known the excuse of her being his ward went out the door.
I understood Hadrian’s hesitance to get close to Eva, but after sometime his push and pull, actions became annoying. Despite this, I enjoyed seeing them together. What I loved about their relationship was how they helped each other grow.  They became each other’s saviour.
Eva saw herself as being unworthy and I understood why, given the abuse she had endured but the constant belittling of her worth became tiresome. Thankfully, she outgrew this phase and became the voice of reason for Hadrian.
I enjoyed learning about Eva’s true heritage, but I would have been nice to see her father’s reaction now that the truth came to light. In addition, it would have been good to know how he took the news that the daughter he saw as an abomination was the mate of a powerful vampire king. I am curious as to the reason Eva’s father took her live with the pack knowing they considered her an abomination. What did he hope to achieve?
This is an engaging and fun story with interesting characters and great world building. It was great reuniting with the characters from the previous installment.
Conclusion/Recommendation
Another great addition to the series. I would recommend this series to fans of paranormal romance. I am looking forward to reading the next book in the series.
Like Reblog Comment 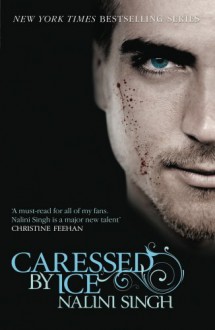 “Judd figured he must have done something right along the way. How else could a rebel arrow have earned the right to call this amazing woman his own? Even if it was a mistake, too damn bad. He was never giving her up.”

Exclusive footage of me as I finished Caressed by Ice:

Judd and Brenna are my new favorite couple on this series! I LOVE THEM!

Sentence: I may or may not have a problem. 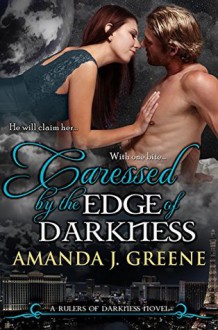 Caressed by the Edge of Darkness is the fifth book in the Rulers of Darkness series, and it is time for Gabriel's story. He became obsessed by Jordan when he first saw her, and tried to preempt her abduction by Boras. When he failed at that, he was desperate to find her. Now Jordan is not your typical wilting wallflower. She was raised as a hunter and is capable of protecting herself. However, her abductors decide to drug her to keep her pliant, and even she can't fight that.
I love a tortured hero, and you don't get more tortured than Gabriel. Once you read about his past, you understand why he is the way he is. Jordan is his perfect match, if he would just trust himself. These two constantly spark off each other, making this a fun read. It is also sexy, with plenty of steamy times. We also get cameo appearances from Dimitri and Kerstyn, and hints towards Gannon and Silvie.
This book is an amazing read, but the one thing that detracts from it is the editing and grammatical errors. Spelling errors are sprinkled throughout, which is a shame because the story itself is wonderful. I would recommend this book, and series, but only if you can skim over errors without them affecting your enjoyment of the story.
* A copy of this book was provided to me with no requirements for a review. I voluntarily read this book, and my comments here are my honest opinion. *
Merissa
Archaeolibrarian - I Dig Good Books!
romance paranormal
Source: sites.google.com/site/archaeolibrarian/merissa-reviews/rulersofdarkness45byamandajgreene
Like Reblog Comment
show activity (+) 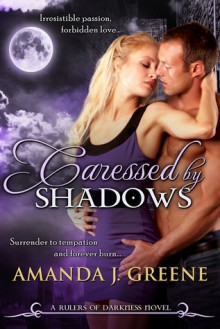 Caressed by Shadows is the fourth book in the series, and one I was looking forward to. Falcon and Sonya just had to get together! There was just a couple of issues - they were breaking the law if they did, which could result in Falcon's death; Sonya is suffering the throes of the Death Curse; Falcon has such a high sense of honour it threatens to strangle him at every turn. Still, with Silvie's help, there may just be hope for these two.
I would recommend that you read this series in order to get the full enjoyment out of the characters and the situations. With each story, you learn more about the world in which they live, and how they became the vampires they are. Sonya is a warrior queen throughout, and makes no pains to hide it. Accept her as she is, or not, she doesn't really care either way. She is a great character that constantly livens things up. Falcon is a good boy in public, and a bad boy in private, so you get the best of both worlds. Their story has been building up over the past couple of centuries, so no insta-love here.
Whilst I thoroughly enjoyed this book, the thing that lets it down is the editing. There are constant errors throughout which I'm afraid did jolt me out of the story. There was one scene with Gabriel and Gannon where, at best, half a sentence was completely missing. At worst, it could be more. I love this series, but the editing is a problem.
* A copy of this book was provided to me with no requirements for a review. I voluntarily read this book, and my comments here are my honest opinion. *
Merissa
Archaeolibrarian - I Dig Good Books!
romance paranormal
Source: sites.google.com/site/archaeolibrarian/merissa-reviews/rulersofdarkness45byamandajgreene
More posts
Your Dashboard view:
All Reviews Text Photo Quote Video URL Activities
Liked posts Top Tags
Press About Terms of Services Privacy Policy Contact Us Blog FAQ Patronaty medialne BookLikes for Authors Partners panel more...
Team Themes Docs API Blogs
Copyright © 2022 BookLikes