Log in with Facebook
or
Wrong email address or username
Sign up
Already on BookLikes? Log in!
Incorrect verification code
Please, check your email, the code to access your BookLikes blog was sent to you already.
Enter code:
« Back Send
back to top
Search tags: Fangirl-by-Rainbow-Rowell 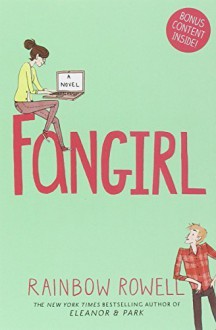 Hey everyone and how's it going? Fantastic most likely, because that is how I feel at that moment yay!!! So, as you can tell by the title, it is another review. I'm sure you're all going why?!, but I did warn you all! Today, I am reviewing "Fangirl" by Rainbow Rowell. I got a lot to say so Allons-y!

Cath is a Simon Snow fan.

Okay, everybody is a Simon Snow fan, but for Cath it's something more. Fandom is life. It's what got her and her sister, Wren, through losing their mom. It's what kept them close.

And now that she's starting college, introverted Cath isn't sure what's supposed to get her through. She’s got a surly roommate with a charming, always-around boyfriend, a fiction-writing professor who thinks fanfiction is the end of the civilized world, a handsome classmate who only wants to talk about words . . . And she can’t stop worrying about her dad, who’s loving and fragile and has never really been alone.

For Cath, the question is: Can she do this? Can she make it without Wren holding her hand? Is she ready to start living her own life? Writing her own stories?

And does she even want to move on if it means leaving Simon Snow behind?

I thought that this book was really amazing! It too paid homage of being a fangirl/boy. It had some really good and funny moments. Like when Cath and Wren had before heading to school. Cath is worried about having a creepy roommate who stays up all night to take pics of her while she slept! The adorableness of Cath and Levi that took time, Levi himself is a gentleman and always has a smile on his face. A funny reaction that Cath's roommate Reagan had, when she found out that Cath was a twin, which creeped her the hell out.

There were times of complete annoyance and anger that got to me when it came to Wren and her roommate Courtney. That needed a common sense shoe to come out of nowhere and hit them...hahaha! Cath also needed to get hit by that shoe as well a lot of time!  A scare and sad time when it came to the girls' dad, who has suffered a lot since his wife and the girls' mom ran off. This book represents some if not all of us who are such huge fans of something, rather it be Harry Potter, Doctor Who, Supernatural, anything really. That all we want to do is live and breathe our fandom and keep going, even if it's long done and some fans have moved on. It also, represents to some some real stuff that is written like dealing this anxiety and depression.

It doesn't matter how old we all are, we all have something that we are such huge fans of and would go at nothing but to create magic for us and those who are still on the train. We should all celebrate our inner and outer Geek! Not let others tell you that you're too old to be apart of your fandoms. But, to also remember to live your life outside of your fandom as well!

Well, that is it from me. I will be back on Thursday with a new review! Until then be awesome and do awesome!

Spoiler Alert: Fanfics are more important than living her life, boys aren't her strongest point and she misses her sister Wren too much.

Fangirl by Rainbow Rowell is a book about a girl named Cath, she has a twin sister named Wren. They both have just started their first year at university (college). Their dad isn't stable while he's alone. Cath struggles when it comes to being social, she would rather spend her time writing up her fanfic which she is known for online. Her dream of getting her twin sister as a roommate gets flushed down the toilet. Her roommate introduces her to Levi which she ends up having an awkward romance with.

This book was like any other YA Contemporary book. It involved a main character that was possibly alone, not enjoying their life that much and need someone they could turn to. With Cathy missing her sister Wren, the person she turned to was her love interest Levi which by the way he was described sounded amazing. Maybe one day I'll have my own Levi.

I really enjoyed this book because I felt like I could relate to this character, being awkward when it comes to the opposite gender, wanting to put all of my effort into the fictional world. This ended up being an easy read for me!

Enjoyed some but was annoyed by, fanfic readings, inner dialog from Cath, her teacher/paper conflict, her need to tag everything. I enjoyed her characters honesty with new experiences, her struggle with a romantic relationship, her responsibilities and how she took control of them. She read much younger than she was in some ways and much older in others. Her college experience was very realistic, and honest. The college experience, is just so far behind me I wasn't that interested in reviewing it. I loved the idea that she wrote fanfic till it was read, too much for me. I never got interested in that story, it was wasted book space in my opinion. The romance was very PG, enough said. Yes, I know I am in the minority here.

I predict that Wren and Cath will become closer as time goes on. When Wren got hurt, even though her and Cath were in a fight, Cath still went to the hospital to make sure that she was okay. Wren and Cath have also talked a lot more after that moment and became closer. These examples show that they care a lot more about each other then they did.  I know this because when people help each other, it usually means that they care for each other

I chose to use this video because it shows two sisters hugging which usually means that they care for each other like Cath and Wren do.

A connection I had to this book recently is when Cath went out of her way to help her sister in the hospital. I have 3 sisters and I know that if anything bad happened to them i would also go out of my way to help them. My previous predictions were accurate. I had predicted that Cath would struggle in college. I was right. She is having a hard time managing writing and her college classes.

My buddy Hannah feels that the author we are reading writes with emotion. I agree with her. All of the characters she writes have strong emotions and have difficulty dealing with all of them.

In order to find books on this site, BookLikes, you can go on your dashboard and look at your feed to see what people are posting. Also you can visit someones blog and see the books they are reading.