Log in with Facebook
or
Wrong email address or username
Sign up
Already on BookLikes? Log in!
Incorrect verification code
Please, check your email, the code to access your BookLikes blog was sent to you already.
Enter code:
« Back Send
back to top
Search tags: Kami-garcia- 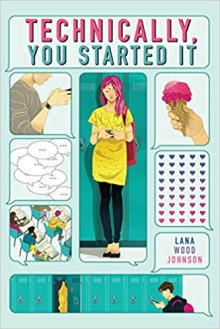 When a tragic accident takes the life of 17-year-old Raven Roth's foster mom--and Raven's memory--she moves to New Orleans to recover and finish her senior year of high school.

Starting over isn't easy. Raven remembers everyday stuff like how to solve math equations and make pasta, but she can't remember her favorite song or who she was before the accident. And when impossible things start happening, Raven begins to think it might even be better not to know who she was before.

But as she grows closer to her new friends, her foster sister, Max, and Tommy Torres, a guy who accepts her for who she is now, Raven has to decide if she's ready to face what's buried in the past...and the darkness building inside her.


Review : I really loved this story. Tragedy happens when she loses her foster mom and her memory and she is now living with her foster mom's sister and her daughter Max . Strange things start happening to Raven she starts hearing a voice . She starts getting close to this guy named Tommy but is there something up with him . On the night of the prom the voice comes out which is her father who is a Demon she's half Demon and Tommy is working with these people who recruit people with powers. Raven doesn't really trust him anymore .Raven has decided to look for this guy name slade cause now her father is in a necklace cant wait to read the next one .

I've talked here before about my love of The New Teen Titans, the 1980-96 series created by Marv Wolfman and George Pérez. They were my real first (and probably deepest) comic love. It informed and shaped my tastes in ways I probably can't realize and definitely can't articulate. It's practically sacrosanct to me. So the idea of DC Comics hiring Kami Garcia (as much as I might like Garcia) to write modern takes on the origins of Raven (and, apparently, others)—whether or not Wolfman signed off on the idea—both repelled and attracted me. At least it had to be better than that Teen Titans Go! monstrosity.

You know what? I liked it.

Here's the official blurb, in the interest of time (saving my time that is):

When a tragic accident takes the life of 17-year-old Raven Roth’s foster mom–and Raven’s memory–she moves to New Orleans to recover and finish her senior year of high school.

Starting over isn’t easy. Raven remembers everyday stuff like how to solve math equations and make pasta, but she can’t remember her favorite song or who she was before the accident. And when impossible things start happening, Raven begins to think it might even be better not to know who she was before.

But as she grows closer to her new friends, her foster sister, Max, and Tommy Torres, a guy who accepts her for who she is now, Raven has to decide if she’s ready to face what’s buried in the past…and the darkness building inside her.

From #1 New York Times bestselling author Kami Garcia and first-time graphic novel artist Gabriel Picolo comes this riveting tale of finding the strength to face who you are and learning to trust others–and yourself.

This retains enough of Raven's original origin story (I have no idea what her post-New 52 origin is) to satisfy me, but tailored for a contemporary (and YA) audience. It feels fresh, as if Garcia had created Raven herself. Of course, Daddy (un)Dearest is waiting in the wings for a reunion with his daughter, providing the lingering threat that leads to the assembling of the Titans (or, bringing the Titans Together! as one might say). This is, of course, assuming that Garcia is heading in a Wolfman-esque trajectory, it seems that way.

Slade Wilson's also around in a vaguely menacing way, but we're going to have to read further installments in this series to get a strong handle on why. It's gotta be nefarious, because it's Wilson.

Picolo's art is nice and dynamic. It pretty much screams motion and youth. Don't ask me to elucidate that, when it comes to visuals, all I can do is give vague impressions. But I dug it. Picolo's not Pérez, but who is? I'm glad he didn't try.

The fact that I didn't throw this across the room in disgust says a lot for me, that I enjoyed it and am looking forward to Beast Boy says much more. If you're a dyed-in-the-wool fan or even just someone who likes non-Avengers/Justice League superheroes, you should give it a shot.