Log in with Facebook
or
Wrong email address or username
Sign up
Already on BookLikes? Log in!
Incorrect verification code
Please, check your email, the code to access your BookLikes blog was sent to you already.
Enter code:
« Back Send
back to top
Search tags: Michael-Sullivan 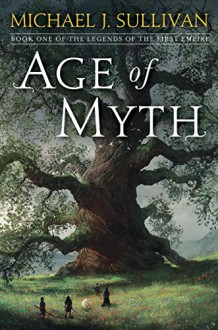 This has the feel of a good old fashioned Medieval Fantasy. A man and his son, Raithe, cross a forbidden river and find themselves in an altercation with one of the gods over the family sword because weapons are forbidden to mortals in the land of the gods. They soon learn that the nature of the gods is not as they thought it was and Raithe finds himself on the run with a liberated slave.

The story has a lot of the earmarks of a typical Fantasy. A race of people who live in the woods, a mock-Medieval society, different factions and clans, fighting and superstitions. It also brings in some elements of mythology with the belief that if you eat anything in the land of Nog, where the forest people live, you can never leave. Given the choice of starving in a forest and being hunted down by a strong and nearly immortal people for revenge or living in a well fed, comfortable situation in an alternate world you can't leave, Raithe and his companion consider their options.

We get to know other factions of characters, sometimes digressing into their individual stories. My one complaint about this book is that it dragged. I got the feeling that the Fantasy world was being created for future sequels where perhaps more would happen. The different peoples were well explained, but that seemed to be the main purpose of the story, to explain all the odd names of factions and how they related to each other.

There are some good basic Sword & Sorcery elements to this one, but it was just a little too slow for me. 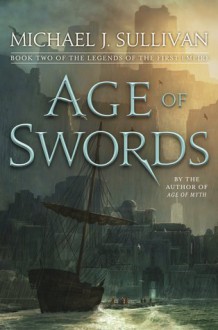 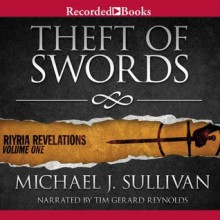 This epic fantasy includes a little breaking and entering, plenty of snarky insults, political intrigue, magical beasts, and a chaotic neutral maimed mage. For me, the tale started off fun but not particularly special. It wasn’t until about a quarter of the way through the book that the tale grabbed me. Royce and Hadrian are a lot of fun. They’ve known each other for years and each is well into their adult years. This was a nice break from all those epic fantasy adventures that feature teen/young adults bumbling through their first adventures.

Royce was my favorite because we have the same dark sense of humor and have to sometimes be talked into doing the right thing. Hadrian is an enthusiastic believer in honor and all things good. It’s a very good thing these two have each other to balance things out. Each has a history veiled in questions and half truths. I look forward to Book 2 revealing more on this note.

The one weakness to this tale is the ladies. It’s not all bad, but for the most part they are comforters and romantic interests and need to be rescued. Arista shows promise with her wit and ability to grasp politics. Also young Thrace has a shining moment at the end of the novel. The ladies aren’t the worst I’ve seen in epic fantasy but I did want just a bit more from them.

There’s a big fat mystery with the elves. Ancient conflict and truces are eluded to and I expect that will become a big deal later in this series. There are a few elvish slaves in some areas of the human realms, but no elves roam free… or if they do, they can pass for human. The maimed mage Esra provides most of what we know about the elves. He’s ancient and was imprisoned for perhaps 900 years (if I recall correctly). Esra is a big enigma. I don’t know what he wants and he might not know either. He has to keep his head down as he’s still a wanted criminal.

Then there’s Myron. I adored this character because of his wide eyed wonder of the bigger world. He grew up in a monastery and had never been off the grounds. He had seen a few horse but never rode one and he’s never seen a woman. As he gets swept up into the adventure, he provides several chuckles. I too wish there were blue horses.

By the end, I had fallen in love with the main characters. I really look forward to adventuring further with Royce and Hadrian. 4/5 stars.

The Narration: Tim Gerard Reynolds gave a great performance for this book. He had distinct voices for all the characters and his female voices were believable. He sounded like he had a lot of fun narrating this story too. I did notice a few short repeats but there were no other technical issues with the recording. I loved his voice for Myron (always full of wonder), his skeptical voice for Royce, and his honorable voice for Hadrian. 4.75/5 stars. 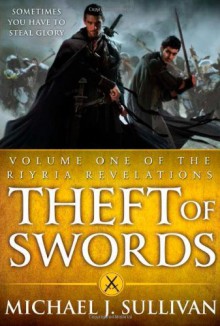 "She was a vision of youthful beauty and Hadrian guessed she could not be more than seventeen."

"You're going to ruin all your pretty makeup" -- said to Thrace by Hadrian as she was crying....


"I mean, sure, she's cute as a button..." said by Hadrian about Thrace


I could go on and on on bad this novel is, but I won’t. I think the quotes above will suffice. As always I’ll go on a tangent when I’ve just finished reading a really bad book. 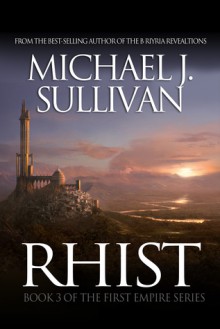 In true Michael J. Sullivan fashion, the characters in this series are wonderful. Multi dimensional and perfectly imperfect. I haven't read a lot of background or talk about this series to understand the full timeline and scope of the story, but it appears that these three books are really one arc building the rise up of the humans to a full fledged war for survival.

I struggled through this story because it was evident that this was not going to be light-hearted and carefree ride. The characters were beaten and broken to begin with and it became evident half way through the third installment that the theme of the narrative was sacrifice, loss and the value of love.

In short, this book has its fill of sadness.

Sullivan is easily one of my favorite authors of all time. And I'm a prolific reader, so I think that's saying something. If you ask me "Well, if it's that sad, is it too depressing...Is it worth the read?" I have to answer that question with a solid yes. I'm seeing this arc as the beginning to his early history before Riyria. I'm dying to know how the races developed and what happened before the time of Royce and Hadrian.

The only reason I gave this book 4 stars instead of 5 is that I feel there is one missing chapter. Even a half chapter following the battle. We end with Persephone's sadness and anger at Raithe. I think we should have had a glimpse of the survivors beyond a couple sentences at the funeral.

I understand there is a follow up book and maybe I'm being unfair, but I feel like there was a little more to be said and if the next book jumps in time, I feel like we deserve a bit more about them interacting and reacting to the battle.