Log in with Facebook
or
Wrong email address or username
Sign up
Already on BookLikes? Log in!
Incorrect verification code
Please, check your email, the code to access your BookLikes blog was sent to you already.
Enter code:
« Back Send
back to top
Search tags: Monica-Murphy 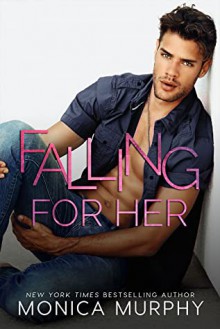 Falling For Her by Monica Murphy


Monica Murphy gave me my "can't put it down" moment. Falling for Her is the best kind of binge. Jake and Hannah could be a cliche, but end up stepping out of the obvious and into the emotional. Jake is the cool guy with the world at his feet. Hannah is the girl that is easy to forget. Except when she isn't. I'm not usually into young adult romance, but Ms Murphy has me rethinking my stand on that. 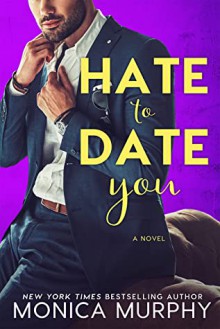 Bring on the sunshine. Hate to Date You encourages emotions to step away from the stress bombarding hearts from all sides and find a smile again. Carter and Stella light up any canvas with their over the top antics and simmering attraction. Murphy provides a breath of fresh air in a time of never-ending chaos. A much needed escape.
first-reads
Like Reblog Comment Caroline Abbott works at a high end stationary store that sells a lot of wedding-related stuff, like save the date cards, wedding invitations, and thank you cards. She's used to dealing with bridezillas, so her newest customer, Tiffany, doesn't throw her much, but the identity of Tiffany's fiance does. It turns out that Tiffany is getting married to Alex Wilder, Caroline's first crush. The last time they saw each other was when she was 12 and he was 14. He gave her her first kiss and then disappeared.

It's a shock to see Alex again, especially like this. When she was a kid, Caroline never realized that Alex came from a wealthy family. It's a bit strange that he's getting married so quickly, only a month or so after meeting Tiffany, and he doesn't even seem to like her much. But Caroline tries to be professional, do her job, and not ogle Alex, who is definitely no longer the gawky boy he used to be. Then she accidentally discovers that Tiffany is cheating on Alex, and things become even more complicated.

This was one of my Book Bonanza purchases. I tend to be drawn to illustrated covers, and this looked cute and fun. I went into this expecting a zany romantic comedy in which Caroline and Alex would awkwardly try to reconnect while dodging Tiffany's probably over-the-top attempts at getting revenge against Caroline and/or Alex. Instead, the writing style made me question what genre I was dealing with - Caroline's first person present tense POV felt more chick lit than romantic comedy, to me - and Caroline and Alex's early flirtation, prior to Caroline discovering that Alex was one of her newest customers, had me wondering whether it was actually going to be Alex who cheated first rather than Tiffany.

While Caroline and Alex didn't kiss or even spend much time together until after Alex learned about Tiffany's cheating and ended their engagement, it still felt uncomfortably like Tiffany was set up for failure. She was horrible and annoying and, even so, I felt a bit sorry for her. From the sounds of things, after the initial shine of their relationship wore off, Alex basically stopped paying much attention to Tiffany, spent most of his time at work, and procrastinated on getting her an engagement ring. Yeah, Tiffany was a gold digger who rushed him into a wedding, but he let himself be rushed. It was like he just couldn't be bothered to break up with her and was going to marry her because it was easier than telling her "no."

Which, honestly, didn't make him an appealing romantic hero. The parts of the book from his POV came across as wooden and boring, and my impression of him only worsened after he and Caroline decided to succumb to their attraction to each other. I think readers were supposed to see them as a better, more solid couple than Alex and Tiffany, but instead I saw Caroline as Alex's Tiffany 2.0. Just like with Tiffany, their relationship started off with lots of bouts of fantastic sex (fantastic for them - I considered the first person present tense sex scenes to be gross and stilted). When things got tough just before the end of the book, though, and Alex had to make a decision between trusting and supporting Caroline or doubting her, he chose the latter. It emphasized that these two characters still didn't really know or trust each other, and the happy ending, after Alex did a bit of groveling, felt hollow.

Also, this was a very small part of the book, but I still wanted to bring it up: I didn't like the way the author used Alex's younger brother, James. Alex had two siblings, his sister Meredith and his younger brother James. James was autistic. It was mentioned that he worked as an accountant in the family business and seemed to be pretty good at it. At one point, Alex thought about how James had told him that he felt like their parents were babying him (he still lived with their parents, and it sounded like they were very protective). Alex privately agreed with James...but also expected that James would one day move in with either Meredith or him, so I didn't really see how he was any different from their parents, not even entertaining the idea that James might want more independence. It also bugged me that, while Meredith got a small speaking role in the book, James didn't. For someone who was supposedly so important to Alex, he had almost no presence.

Caroline had a group of friends who all gave off "future heroine in this series" vibes. However, none of them particularly drew me in, and after the issues I had with Save the Date, I have no intention of trying another one of this author's books.

About 30 pages before the end, Alex screwed up pretty majorly, in a way that emphasized that he and Caroline don't actually know each other very well. He does a bit of groveling and basically asks for a do-over, and then we get a "one year later" epilogue in which they're very happy together. Meanwhile, I'm not sure what I just read, but I wouldn't call it a romance. This was marked as chick lit by a few users on Goodreads, but I'm not sure I'd call it that either.

Anyway, yay, I'm done with this. It won't be staying in my collection, and I don't plan on reading any of the author's other books.

I was right, I really am going to finish this quickly. But first I have to suffer through a first person present tense sex scene or two. Ewww.