Log in with Facebook
or
Wrong email address or username
Sign up
Already on BookLikes? Log in!
Incorrect verification code
Please, check your email, the code to access your BookLikes blog was sent to you already.
Enter code:
« Back Send
back to top
Search tags: Orwellian-future

"Will this cause an author distress?" is an unimportant consideration, or should be, to a reviewer, a reader, or a website, in relation to a review. The author is, by the act of offering a book, a story, or any other written/created work for the perusal of the public, no longer entitled to the protection of "that hurts my feelings."

I post here my very thoughts spoken by another:
<blockquote>"It's now very common to hear people say, "I'm rather offended by that", as if that gives them certain rights. It's no more than a whine. It has no meaning, it has no purpose, it has no reason to be respected as a phrase. 'I'm offended by that.' Well, so fucking what?" —Stephen Fry</blockquote>

You, by writing something intended for public consumption, are agreeing that the public is entitled to judge that thing. By their own standards. Whatever those standards may be. The public then has the privilege (right, in the case of the USA) to pass on that opinion AS AN OPINION to any and all persons they can convince to listen to them.

An Italian tenor named Guido Nazzo (horrible name even in Italy) came to the USA and sang in many regional opera companies' productions. He made it to New York, despite his very modest gifts, and here he encountered a reviewer of his era named George Jean Nathan who said of one of his performances, "Guido Nazzo is nazzo guido," and completely ruined the man's career. Never, ever again after that could he appear on a stage without some wag repeating this knock.

And it was, and is, perfectly legal for a CRITIC (a reviewer, in the case of Goodreads), to pen such an inevitable and memorable, yet cruel, line.

If the authorities, private business or public official, veer over the legal line into making value judgments about what kind of criticism you're willing to accept about any given work of PUBLIC art's creator, then YES MA'AM you are engaging in censorship and you are doing so either in inexcusable ignorance or disingenuous purposefulness.

There aren't other options.

Vile people will always find a way to be vile. Whatever avenues of expression I can close down to them, I want to close down to them. There is a difference between not liking what someone says and forbidding them to say it. The best, most socially useful way to silence someone is to point to what they theirownselves have said, or done, and shout at them...embarrassment, shame, contumely are more instructive than disappearing someone's thoughts.

Life is hard for the sensitive. I realize not everyone can deal with the rough-and-tumble of free speech and argument. That's unfortunate. But no one makes a person stand up and be noticed. If you choose to do that, accept the consequences. Otherwise, sit down and use your other means of participation, like voting for or buying from those whose views match most closely your own.

This works in commerce as well. Your patronage is your vote. I won't buy an Orson Scott Card book because he's a public homophobe. Not one dime of my money will go to support him or the people who publish his books, or the people who made his book into a movie. Others make their own choices. But, and this is crucial, I go the next step and write shaming reviews of his books, pointing out that his revolting "moral" stance ruins the pleasures (such as they are) of his writing, and by purchasing his books the buyer implicitly supports his desire to take away civil rights from a group of people he dislikes. I don't ever support that, even though I'd love to make exceptions for some groups.

I believe, with all my being, that you stand up for what you say believe or you lie down for your dirt nap. What I don't condemn, I condone; and I can't live with passive condoning of what I see as wrong. My only avenue of expression is here in cyberspace. I take my self-imposed responsibility to live up to my principles very seriously. So, wherever someone's right to be a public nuisance is infringed, I have to complain loudly about it, point to the infringer, and say "SHAME SHAME SHAME" because, one day, they'll get around to silencing me.

I won't make it easy on 'em. Which, I've learned over the years, doesn't make me easy for others to deal with. Ah me, that's a shame, but there it is.

EDITED because I hit "SAVE" before I was done!

I'm really saddened by this, but I guess it will just have to stay down until I figure out what happened and why.

Sorry for any inconvenience. I'm bummed, since it was my best-selling book, and I'm not exactly swimming in the dough. :/ 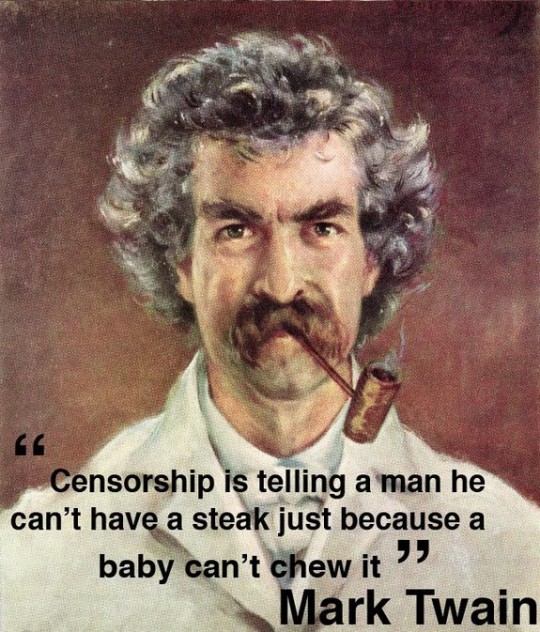 The Goodreads policy of arbitrarily censoring, by deletion, any reviews that contain references to an author's behavior, beliefs, or public statements that affect my personal opinion of that author and his or her output is flat-assed stupid.Silencing people does not make the world Nicer. It doesn't make the author's views go away. It doesn't stop people from...gasp!...being offended by something they read. It makes the censor a fool, and those calling for censorship crybabies.Thoreau, a mama's boy who lived at home until he moved to the wilderness of five miles away from home and still ate mama's cookin' and used mama's laundry skills, advocated standing up to stupidity by legal protest action. This is me, being Thoreauvian.No, Goodreads, I won't delete my account. No, Goodreads, I won't sit down and shut up. You are censoring speech because some delicate little fleurs find it too harsh? Where does that road lead, except to Orwellian doublespeak and Kafkaesque domination of people's personal space?The law allows you to do what you're doing. But my mama, a woman whose political views were to the right of Hitler's, taught me something important when I was small:THE LAW ALLOWS WHAT HONOR FORBIDS.

The Goodreads policy of arbitrarily censoring, by deletion, any reviews that contain references to an author's behavior, beliefs, or public statements that affect my personal opinion of that author and his or her output is flat-assed stupid.

Silencing people does not make the world Nicer. It doesn't make the author's views go away. It doesn't stop people from...gasp!...being offended by something they read. It makes the censor a fool, and those calling for censorship crybabies.

Thoreau, a mama's boy who lived at home until he moved to the wilderness of five miles away from home and still ate mama's cookin' and used mama's laundry skills, advocated standing up to stupidity by legal protest action. This is me, being Thoreauvian.

The law allows you to do what you're doing. But my mama, a woman whose political views were to the right of Hitler's, taught me something important when I was small:

THE LAW ALLOWS WHAT HONOR FORBIDS.