Log in with Facebook
or
Wrong email address or username
Sign up
Already on BookLikes? Log in!
Incorrect verification code
Please, check your email, the code to access your BookLikes blog was sent to you already.
Enter code:
« Back Send
back to top
Search tags: River-Savage This was so much better than the first book. Before I knew it, I had read over 70 % of the story and couldn't stop.
The storyline was heartbreaking but beautiful, the exciting parts kept me at the edge of my seat, and there was more about the family and club members in this story.

Sy was an amazing hero. At first he seemed such an asshole but reading about his past and how he helped Holly, I fell in love. Holly was so spunky at the beginning of the series, so it was difficult to see her struggle, but on the other hand I couldn't put the book down because I needed to know what would happen next. Holly and Sy were amazing together. They took time to get to know each other and their main concern wasn't ripping each others clothes off. They did that too, of course, but hot sex was just part of the story, not the story itself.
I'm not sure I can explain it well enough. Let's just say, that I read Nix and Kadence's story a few days ago and I've already forgotten big part of it. But I remember every scene about Holly and Sy. Now after reading Holly and Sy's story, I'm sure I won't forget it. Their story made me laugh, sigh, blush, and cry. I enjoyed it so much. Can't wait for Jesse's story. Well, the story wasn't very exciting - a lot of sex scenes, not enough romance, and overboard "chemistry" between the main characters. Every time those two met, Nix's jeans were suddenly too tight and there was always a puddle where Kadence had been sitting or standing. At first it was hilarious but then it became annoying. The end had more action and the story became quite interesting. Hopefully it's a good base for Sy and Holly's story.
Overall it fulfilled its purpose - I was reading a horror story at the same time and had no nightmares thanks to this oversexed book. I've been trying to figure out what to write for my review for this AMAZING new book from River Savage. 'Hetch' is book 1 in River's brand new series "Men of S.W.A.T" & what a begining to the series is was. I loved EVERYTHING about this book, Hetch is a HOT as hell ALPHA male, leader of a SWAT team... Liberty is sweet, sassy & stands up for the kids who have no one. The tension between Hetch & Liberty is hot, sweet & funny at times to read. I was about 29% through the book where I was laughing so hard, tears falling down my face, the situation was freaking hilarious... but I think it helped ease you into what I was about to read next, the tears that fell next weren't from laughter. Oh I wont be going into details, but I will say that River weaved her magic throughout this story, bringing forth all the characters without loosing the story around Hetch & Liberty. I loved that you got to read from both POV's, helping to understand what both characters are feeling so much easier. I really can't wait to read the next books in this series. 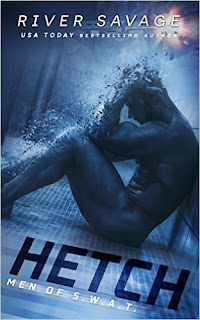 So I have to admit. I didn't devour this like I have with all River's other work.
I stopped and started a bunch of time  and for some reason I just couldn't connect with Liberty.
I almost gave up. Almost. Until I remembered that this is THE River Savage!
So after a few days of just leaving it alone, I started again from the start and boy am I glad I did. I couldn't put it down!
This is nothing like the Knights Rebels series, but that not to say it's not incredible in its own sexy way.
This is going to be short and sweet because I am finding it hard to keep this one spoiler free ?
Hetch. The S.W.A.T team leader, Bad-ass cop, mSexy as sin with a dirty mouth who just so happens to be a total sweetheart.
He deals with risk-taking and emotional suicidal situations constantly through his work, but he hasn't really dealt with the suicide of his father, it still lingers at the front of his mind.
His way of dealing? Booze and pussy. Lots of pussy.
He's the dominating manwhore who just happens to also be sweetheart that has you melting at his feet, not to mention a sex drive to drive any woman insane with desire. Especially the one who lives on the other side of the paper-thin walls ?
Hetch doesn't do relationships, he is a one-night deal. Until Lib.
Liberty, the sexy little firecracker with a heart of gold and a sassy mouth who works in a boys home, helping troubled teens find the right path. After a messy break-up, she's sworn off men and sex, but you can only take listening to the moans and screams of passion through the paper-thin walls before you bust out the trusty vibrator, that doesn't count in her sabbatical.
These two may know how each other sound when they orgasm,
but they are yet to meet. . . .
When Hetch notices Lib in the bar he's not taking no for an answer, sparks are flying and the chemistry is insane.
By the time they pull into Hetch's parking spot, the fun beginnings as the realisation dawns on Liberty.
Sex, stubbornness, protectiveness, hilarious moments, breaking down walls and love with every single emotion in between.
Seriously, I am wondering if there is anything this woman can't write, once again, she has hit the ball right out of the park and in true Savage style her men are dominating, sweet, intensely caring and breathtakingly dirty mouthed. And her woman are even tougher then her men with sassy and strength second to none, and Hetch and Lib do not disappoint.
Just go grab it, you really will love these two ❤️