Log in with Facebook
or
Wrong email address or username
Sign up
Already on BookLikes? Log in!
Incorrect verification code
Please, check your email, the code to access your BookLikes blog was sent to you already.
Enter code:
« Back Send
back to top
Search tags: Rose-Madder 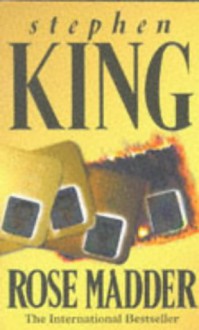 It is not uncommon for Stephen King to write about men with extreme anger issues. If a female author were to write a character like Norman she would be called a man-hating harpy. He is a caricature, even in the chapters written from his perspective, his thoughts consist entirely of hate and rage. Norman is a misogynist, a racist, and a wife-beating sack of shit, and he's a cop.

After fourteen terrifying years Rosie leaves him. She leaves him because a drop of blood on a sheet grabs her imagination and won't let her fall back to sleep. And when she leaves she is amazing. She runs even though she knows he won't give up until he finds her. She trusts and she loves and she starts to believe in herself again. Rosie is probably my favourite of King's characters, while Norman is my least favourite.

Part thriller and part dark fantasy strangeness, it is a story about not simply surviving abuse but transcending it. 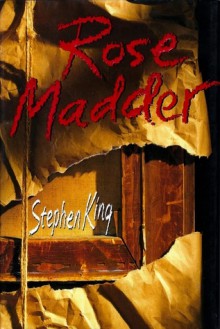 Stephen King once famously proclaimed himself the Big Mac and fries of literature — meaning his works are popular and enjoyable, albeit perhaps lacking in nourishment. I heartily disagree with that assessment, for the most part. Novels such as IT, Dolores Claiborne, and The Dead Zone are intricate, multi-layered masterstrokes; methinks King is too modest in regards to his own creations.

However. . . the Maine author's observation does hold true in a few select cases. Christine is a barrel of fun, but it certainly offers no depth. That's cool. King's 1983 novel about a haunted car is campy horror at its campiest. I think I would put Rose Madder in the Big Mac and fries category, too: while fun and involving, one comes away feeling full but perhaps not particularly satisfied.

This is a brutal, hard-edged tale of spousal abuse, escape, and recovery. The main character is Rose, a woman dealt physical and mental trauma from her husband for fourteen years. Rose Madder is her journey to self-discovery and freedom. Like previous novels Gerald's Game and Dolores Claiborne, King takes an unflinching and daring look at femininity and what it takes to be a woman in the modern age. And, for the most part, he succeeds.

Perhaps my biggest problem with this story is not the infamous magical painting Rose escapes into (a plot point that didn't work for me the first time around, but I had a bit more fun with it on this reread), but Norman — the abusive husband. This dude is so over-the-top it's unreal. King is a master at creating despicable, terrifying humans; it's nothing short of fascinating that he failed so completely with Norman. He's a walking cliche, and King never takes the time to give the reader any reason to sympathize with him. He's just CRAAAAAAAAAYYYYYY from literally page one, and he only gets worse. Because of that, much of this novel's potential menace is lost. Shame.

That said, the mythological elements of this novel . . . are interesting. They don't always work, and sometimes they seem awkwardly juxtaposed with the woman-on-the-run thriller feel, but it's whatever. King would explore escaping into an alternate, mythic world to better effect in Lisey's Story.

Rose Madder is Stephen King at his most average. While containing interesting ideas, some captivating prose (especially that prologue — sheeeeesh!), and a serviceable main character in Rose, this novel just feels tired, inessential. At times I got the sense King was getting bored with the story, and was ready to finish the damn thing. Recommended, but perhaps only for King completists.

There are a few tangential connections to Dark Tower, such as references to ka and the City of Lud.

Paul Sheldon of Misery fame gets a few generous shoutouts.

"In that instant she knew what it must feel like to cross a river into a foreign country, and then set fire to the bridge behind you, and stand on the riverbank, watching and breathing deeply as your only chance of retreat went up in smoke.”

I thought Desperation was next, but I forgot The Green Mileexists. Ha!

This book is criminally underrated.

I know I tend to read women authors these days, and that's on purpose, but I grew up reading far more books by men. I wouldn't say more authors, just more books. King, Clancy and Cussler were my go-tos. Of course, Anne Rice and Anne McCaffrey were big back then too and I read all the Vampire Chronicles and the Rowan series. While literature in general does have a reputation for taking their female characters for granted, some have been worse than others. And some have been great. Over the years, I have read some great female characters that were written by men. They weren't perfect, but they're my favorite for a variety of reasons that do include that they could be actual women instead of that weird version of women that has been prevalent in literature and media. Some get through the cracks.

Here are my top 3 favorite female characters that were written by men.

While I haven't read George R.R. Martin's A Song of Ice and Fire series, I have heard that he is wonderful at writing women. I know, just from watching the show,  that the women in it are varied, deal with their circumstances in different ways but that make good sense for their character types, and have varying amounts of strength as well as different ways of expressing strength and weakness and tenderness, much like real women.

Also, King writes lots of great women, I think. Rose is the one that has stood out the most in my memory. I read that book as a teenager and still remember parts of her personality and reasoning for some decisions. I'm not sure why she's stuck out so much among all the other characters, but she has. The woman in Gerald's Game was interesting, too. I'm sure the details are jumbled in my memory with other things from other places, but Gerald's Game was one of those stories that was scary because it could happen to anyone. No supernatural elements there, just people who weren't being their best selves and harming others. It still gives me a shiver to think of, but I don't remember the woman sticking out quite as much as the surrounding circumstances, so I didn't want to include her. OSC also writes great women, like all the women from the Ender's Game series, except maybe Valentine. She was too perfect, but it could have been the way her brother sees her and therefore treats her. Not sure. But seriously,  I didn't even realize the Uglies series wasn't written by a woman, particularly given such a great female protagonist. It was my own ignorance at the time to assume such a thing based on the quality and choice of a female protagonist. I'm working on it, but the point is that she was a great female character as well as a great protagonist.