Log in with Facebook
or
Wrong email address or username
Sign up
Already on BookLikes? Log in!
Incorrect verification code
Please, check your email, the code to access your BookLikes blog was sent to you already.
Enter code:
« Back Send
back to top
Search tags: Samuel-Beckett I was curious about Beckett and I was especially curious about his play Waiting for Godot. This is because whenever I have heard about it, people were either really enthusiastic or really bitchy about it. So I just did, what everyone should do in this situation – I made up my own mind.

Waiting for Godot
I like this play.
Although there is not much action going on, a lot is actually happening in this play. It is amazingly sad, funny, beautiful, depressing, cruel and touching at the same time. The relationship between Estragon and Wladimir is just incredible. And Godot? I have no idea, who or what Godot is and neither had Beckett. But is this really important? For all it’s worth, I do not think that it matters at all.

Endgame
I also like this play.
Again, it is sad and beautiful at the same time. If I had to establish a central theme, it would be the power of human relationships. Beckett shows, that no matter how sick you are of someone else and how much you may despise one another, sometimes you are so dependent on each other, that – for good or worse – you simply cannot leave.

Happy Days
I do not like (to read) this play.
There are two types of plays - plays written to be read and plays written to be staged. Happy Days is definitely the latter. Although it is quite short, it is extremely exhausting to read due to the fact that it is basically an ongoing monologue, constantly interrupted by stage directions (which you can skip, but then it is even weirder or which you cannot skip, but then they are just annoying and interrupting the non-existent flow of the text).

I salute to every actress to take on this roll, I imagine, this is incredibly hard to play, but, honestly, reading it is a sheer nightmare. Back when I was getting my Literature degree, I loved when a class read Beckett. His work is the best kind to discuss and intensely analyze. Unfortunately, as I just learned, it's not nearly as interesting to read in isolation. I imagine I would have rated this much higher if the circumstances of reading it (in a group, namely) had been different. So far my experience with what is called the Theatre of the Absurd has been very limited and not particularly enchanting. Therefore it was daring of me to pick of all things a play by the 1969 winner of the Nobel Prize in Literature, Samuel Beckett (1906-1989), for the Back to the Classics Challenge 2015 on Books and Chocolate for which I signed up with my main book blog Edith’s Miscellany. I must admit that reading his famous Endgame from 1957 hasn’t been a mere pleasure for me. As a matter of fact, absurdity not only confuses me as much as ever, but it also annoys me terribly although in general I like the symbolic and thought-provoking.

Quite expectedly, the play left me at a loss at first. Not being a chess player, I didn’t even grasp the title’s reference to the final moves of a game that in fact is already decided. For the rest, the story took a while to sink in and to allow me to see some of its hidden meaning. The scene, as the author meant it to be, is scarce and bleak from beginning to end consisting only of an almost empty room with two windows on the back wall that are so high up that it requires a ladder to look out. In an in-depth analysis of the play I read that it’s an assertion to the human skull, but reading the book it didn’t occur to me although it might be rather obvious when seen on stage. In the room there are two ashbins and, on a chair in its exact centre, sits Hamm as if he were just a piece of furniture, not one of the protagonists. Apart from Hamm only three characters ever appear on stage, namely the other protagonist called Cloy and Hamm’s ancient parents Nagg and Nell “living” each in an ashbin where they sleep and nibble a biscuit occasionally. The world of all four is one without hope nor meaning, a purgatory scattered with allusions to the inferno of Dante’s Divine Comedy. All they ever “do” is wait for death to bring them the long yearned for salvation. The play focuses on the relationship of Hamm and Cloy which is one of mutual dependence. Blind and paralysed Hamm clearly represents the thinking and inventive mind that is helpless without the five senses and muscle control of which Cloy is an allegory since he is the one who can perceive the outside world and move about in it. Nonetheless, Cloy depends on Hamm because without his key he has no access to food and is doomed to starve. Nagg and Nell, on the other hand, stand for the memory of the past that many of us tend to treat like rubbish. Their role in the play is secondary, though, because they only appear when Hamm calls for them.

There isn’t much of a real plot in Endgame because the play revolves around the characters whose actions are often repetitive and – absurd. Surely, it’s a play that needs to be read and seen on stage, but I’m not much of a theatre-goer. Writing this review, however, helped me to understand the idea behind the play and to appreciate its complex symbolism. It’s clearly a work of genius… and therefore not easily accessible.

This review is a contribution to the
Back to the Classics Challenge 2015,

namely to the category Classic Play. 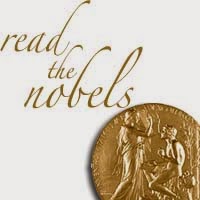 to the perpetual Read the Nobels challenge.
For more information and a complete list of books that I already reviewed for it »»» please read my challenge post on Edith's Miscellany!
Nobel Prize laureate European literature English literature Play original book notice
Like Reblog Comment
show activity (+) 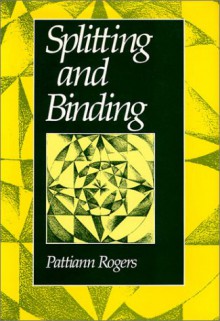 I work for a company that produces academic content, so we have a pretty substantial reference library. They just announced that they are clearing out their unused and out-of-date materials, so I picked up a nice hefty stack of FREE BOOKS! I focused on grabbing as much poetry as I could, since it is something I've been meaning to tackle a lot more.

One of the interesting things that I find about Beckett's plays is that he resists the temptation to offer any interpretation to what is going on within the play, or what the play is about. In fact he seems to do completely the opposite in actually denying certain interpretations (while not offering any reason as to what it is about). For instance, when asked if Godot is supposed to be God, his response is no, and asking whether Endgame is set in a post-apocalyptic world, once again his answer is no. However, the title of the play 'Endgame' suggests that this is a play about endings, but not any old endings, but rather an ending in which the protagonist does not want to accept has arrived.

The term Endgame applies to a part of a game of chess coming, surprisingly, at the end. It is suggested by some that at this part of the game the winner has already been defined, however the loser still struggles against all odds in a vain attempt at victory. In a way it plays well into this classic example of the theatre of the absurd with the idea of continuing one's existence, and fighting, despite the fact that one has lost and that there is no way out of that existence.

The main character within the endgame in the play is Hamm, a blind man who cannot stand and is entirely dependant upon his servant Clov (who cannot sit). While most of Hamm's interactions are with his servant Clov, there is an occasional interaction with Nagg and Nell, Hamm's parents, who are confined to a couple of barrels (and it is suggested sometime during the play Nell dies). In a way Hamm seems to vainly clasp on to an idea of hope despite the fact that, for him, the end has arrived; while Clov, the one who actually holds all of the power, is torn between leaving and staying – he desires to leave because Hamm is a demanding and cruel master, but he desires to stay because of his obligation to Hamm.

I feel that the question of whether the world is post-apocalyptic is a moot point because that, I believe, is beyond the scope of the play. However, there is the suggestion that there is nothing left – everything has gone, which brings us back to the question of whether the world is post-apocalyptic. This, in a way, plays into the theme of the title in that for those living in a post-apocalyptic world the end has arrived, however they are not quite there yet and are fighting a vain battle to not just survive, but to win. In another sense, it is a situation that we have brought ourselves into, and in a way we are blind to the fact that we are in that position.

Then there is the motif of blindness, which is something that Sparknotes doesn't seem to touch upon (this is actually a pretty decent website to consider the ideas that come out of various pieces of famous literature). In a way, just as the players in the Endgame may be blind to their predicament, Hamm is himself blind to his own predicament. He is the king of the piece but he is completely reliant upon Clov, who is the queen. Without Clov Hamm is defenceless. However he refuses to realise this and continues to push Clov around. However Clov is also in the same predicament in that there is nothing outside of the four walls of the room (just as there is nothing beyond the chessboard) and as such, while Clov may leave, there is nothing for Clov outside of the place. Thus for Clov to have any meaning, Clov must be here because, well, Clov is Hamm's servant, and that is the definition that he is given himself – without that definition Clov is effectively nothing.

I recently saw a permformance of this play, and have written up some further (and similar) thoughts on my blog.