Log in with Facebook
or
Wrong email address or username
Sign up
Already on BookLikes? Log in!
Incorrect verification code
Please, check your email, the code to access your BookLikes blog was sent to you already.
Enter code:
« Back Send
back to top
Search tags: The-Year-We-Fell-Down 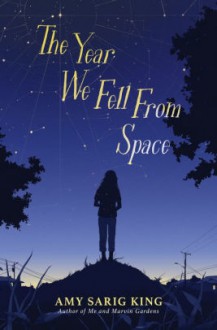 This is an important novel that addresses divorce and depression for children, that speaks their language. Addressing the promises, the hopes, the disappointments, the stresses, the anger, the blame, and just about every emotion that a child feels as their parents separate and divorce, this book confronts them directly.  A.S. King delivers another great book.

The arguing the occurs between Liberty’s parents has reached its limit and now, her dad was moving out.  He was making promises to Liberty and her sister, Jilly to smooth out the situation but nothing he could say would ever make this move easy. Liberty and her dad were close.  They spent a lot of time together, they loved to unravel the night sky together.

Liberty’s world begins to fall apart when her father moves out of the house yet she keeps everything inside her.  She continues to try to find comfort in the night sky but like everything else in her world, it just isn’t there anymore.  Wishing upon stars, asking for guidance, Liberty calls upon the night to help restore her balance. Liberty is spiraling.

I liked the difference between the two sisters.  Liberty was the older sister and she tried to keep her emotions inside and in-control. Her younger sister, Jilly made me smile and laugh numerous times, as she’s young, carefree and she’d let’s go with what’s on her mind, when given the chance.  Liberty couldn’t talk openly so what she really needed was to talk privately with some individuals throughout the book but she just couldn’t.

I enjoyed how the book dealt with all the different emotions that occur during a divorce. Children are a major part of a divorce yet some parents feel that they’re not, forget to include them, or just don’t want to get them involved.  Children need to be able to talk about their feelings, ask questions and get a truthful (as truthful as they can handle) response to their questions.  Children need to feel valued and respected during this time. I think this book addressed these topics very well.

I really enjoyed this book and I highly recommend it.  Another fantastic book by A.S. King! 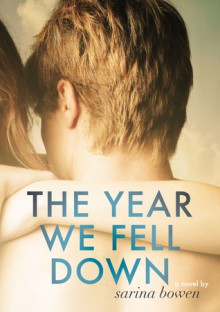 ~~ The Year We Fell Down

I was supposed to start college on the Harkness women's hockey team. But I'm showing up in a wheelchair instead.

Everything about my new life is difficult, and there's only one person who understands. Across the hall, in the other handicapped-accessible dorm room, lives the too-delicious-to-be real Adam Hartley. His leg is broken in two places.

We bond over broken elevators, hockey games, and disappointments. We're just friends, though, until one night things fall apart. Or fall together. All I know is that I'm falling. Hard.

But can Hartley love someone as broken as me? His deep brown eyes hold their own demons. While my troubles are visible for everyone to see, his are hidden deep inside... 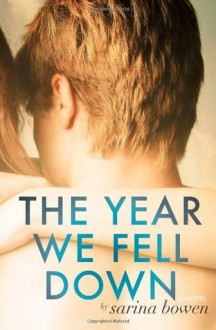 She expected to start Harkness College as a varsity ice hockey player. But a serious accident means that Corey Callahan will start school in a wheelchair instead.

Across the hall, in the other handicapped-accessible dorm room, lives the too-delicious-to-be real Adam Hartley, another would-be hockey star with his leg broken in two places. He’s way out of Corey’s league.
Also, he’s taken.

Nevertheless, an unlikely alliance blooms between Corey and Hartley in the “gimp ghetto” of McHerrin Hall. Over perilously balanced dining hall trays, and video games, the two cope with disappointments that nobody else understands.

They’re just friends, of course, until one night when things fall apart. Or fall together. All Corey knows is that she’s falling. Hard.

But will Hartley set aside his trophy girl to love someone as broken as Corey? If he won’t, she will need to find the courage to make a life for herself at Harkness — one which does not revolve around the sport she can no longer play, or the brown-eyed boy who’s afraid to love her back.

New adult with real stakes instead of crazy sauces is well done here.

The hero and the heroine become friends first, fall in love, and then it takes a while before they are an item.

he hero isn't perfect in terms of his own level of self reflection and heroine is dealing with the major life change of her injury.

It is a really wonderful romance in a awesome setting.

Corey Callahan was expecting to go to prestigious Harkness College as a varsity hockey player, but instead arrives there in a wheelchair, after ending up partly paralysed from the wait down after an accident on the ice. Her cheerful new roommate doesn't seem to mind that they have to stay in a handicap-accessible room away from all the other Harkness freshmen. If having to re-assess all her hopes and dreams about college wasn't difficult enough, Corey also falls head over heels for the extremely hot hockey player in the room across the hall, incapacitated by a leg broken in two places. The only problem? Adam Hartley already has a girlfriend.

Hartley's girlfriend is spending a semester abroad, however, and as they are both stuck in the "gimp ghetto" together, Hartley and Corey strike up a close friendship, taking lectures together, helping each other manoeuvre the dining hall and bonding over hockey played on a games console, since neither of them can skate on the ice at the moment. Corey grows more miserable as with time, she discovers that Hartley isn't just drop dead gorgeous, but smart, charming, friendly and funny. While all his friends and teammates seem to be encouraging him to forget his bitchy girlfriend, Hartley is determined to stay faithful to her. Will Corey ever have a chance with him? Will a vibrant and clearly active guy like Hartley ever see a broken girl like Corey as anything more than "one of the guys"?

Last year, a number of Cannonballers read and rated Sarina Bowen's The Ivy Years books, a series of New Adult novels set at the fictional Harkness College, mostly centred around hockey, very highly. Hence when the first book in the series was available for free on Amazon for a limited time, I jumped at the chance to get it. To complete the last few of my massive amount of reading challenges towards the end of 2015, I never got round to actually starting the series, but now, with a new reading year open to me and less demanding reading challenges on my plate, I figured I'd see what all the fuss was about. Like with Kristen Callihan's Game On books, featuring American football players, I know little to nothing about the sport that many of the characters care about and couldn't really care less about it either. Unlike with American football, however, I teach at a school where quite a lot of the
teenagers play hockey and I've actually seen the game being played.

Not that there's much hockey being actually played in this book, unless you count the computer game kind. Yet it plays an integral part in the lives of both protagonists. Corey's older brother is a former student at Harkness and used to play for the college hockey team. Hartley and his teammates all know him and are amused to discover that Corey is his little sister. Because she gets the game and all their references, it doesn't take long before they've all adopted her, while trying not to talk too much about the fact that Corey won't ever again be able to play the game they all love so much. While Corey has insecurities of her looks and especially the fact that she's stuck in a wheelchair, she's determined not to let her injury define her and there certainly isn't a "poor little me" attitude about her. She works hard to work up her strength so she can get around on crutches instead of solely in the wheelchair and she has an amazing gallows humour, often making jokes at her own expense before anyone else can. The fact that Hartley is stuck in the same boat as her, confined to crutches for a whole semester, makes it less lonely for her to be a "gimp".

Hartley is an all-round pretty great guy, but can't get over that he is illegitimate and comes from a poor background. While none of his friends can really stand his snooty, privileged and wealthy girlfriend, Stacia, Hartley is amazed that someone so popular and high class would even deign to look in his direction, and puts up with way more than is entirely reasonable just to be with her. While he and Corey start out as friends, it's obvious as time passes that there is more between them than just camaraderie, and once he becomes aware of the feelings Corey has for him, he should either have broken up with Stacia or stopped being quite so flirty with Corey, as leading her on was just needlessly cruel. I also didn't like the way he handled being stood up on his birthday, as he'd previously been so firm about being faithful and not fooling around. Once again, it was cruel towards Corey. Hartley spending way too long coming to his senses and refusing to dump Stacia, even when he knew full well that Corey was into him, is the reason I'm deducting half a star from the rating of the book.

As well as a great, gradually developing from friendship to love relationship between the protagonists, I really liked the presence of several of the supporting characters. The friendship between Corey and her roommate Dana is a great one and Hartley's teammates were also fun when they appeared. I liked the way the girls supported each other and how Dana forced Corey out of her comfort zone occasionally, preventing her from just holing up in their room all the time, away from the world. I can absolutely see why Sarina Bowen's books were popular among so many and am glad I finally got to jump on the band wagon too.