Log in with Facebook
or
Wrong email address or username
Sign up
Already on BookLikes? Log in!
Incorrect verification code
Please, check your email, the code to access your BookLikes blog was sent to you already.
Enter code:
« Back Send
back to top
Search tags: a-hippo-banquet 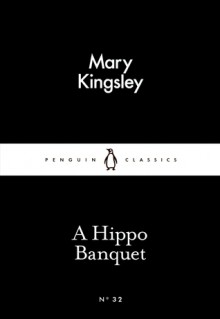 This was an interesting read. The Hippo Banquet features travel stories by Mary Kingsley, being an explorer in a time where female explores where very rare. So for that I found it interesting to read about and she actually writes quite well. However, her views are very Victorian (obviously) and I've found that I never like these travel stories very much.

Mary Kingsley was an 19th Century English scientific writer and explorer. She wrote two books about her journeys through Africa and helped to change Europe's view of the African cultures and British Imperialism.

I had never heard of Mary Kingsley before I picked this book up and I think that is the greatest tragedy. How many men have I heard of who travelled the world, how many men I have read who spoke of daring deeds and exotic places. And here we have a woman who travelled alone and of her own interest to a land that, at the time, appeared to be wild and definitely not a place for a Victorian lady.

She has a wonderful turn of phrase and although she often reminds us that she is, of course, a woman, everything she does is everything an explorer should do. She fought off two Leopards as they fought dogs and she stumbled upon almost every creature known to man by accident, but did not run in fear but instead stood and watched. She did not take any crap from any man, whether or not they wore a British Military Uniform or a simple loincloth about his groin.

And, despite what we may think of the Victorian period, she was greatly received by her male contemporaries, but she did not enjoy the label of being a "new woman". She was not concerned with Feminism, instead she concerned herself with her own well-being, science and the preservation of African culture. She died of Typhoid whilst serving a nurse during the Second Boer War. She was not a woman, a new woman or a man, she was simply a scientist and writer; a Human Being.
More posts
Your Dashboard view:
All Reviews Text Photo Quote Video URL Activities
Liked posts Top Tags
Press About Terms of Services Privacy Policy Contact Us Blog FAQ Patronaty medialne BookLikes for Authors Partners panel more...
Team Themes Docs API Blogs
Copyright © 2020 BookLikes