Log in with Facebook
or
Wrong email address or username
Sign up
Already on BookLikes? Log in!
Incorrect verification code
Please, check your email, the code to access your BookLikes blog was sent to you already.
Enter code:
« Back Send
back to top
Search tags: a-spool-of-blue-thread 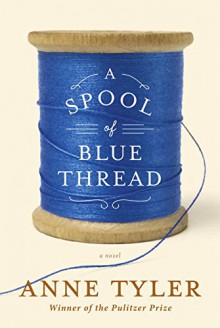 Anne Tyler is a master at making family relationships come alive, in all their messy glory, and A Spool of Blue Thread is no exception. Set in Baltimore, as most of her novels are, this book tells the story of the Whitshanks -- a family who came up from nothing, yet ended up owning a house as quirky as they are.

The patriarch these days is Red Whitshank. He and his wife Abby have four grown children and a number of grandchildren. Red and Abby are getting on in years, and part of the plot centers around how the adult children can best help their parents age in place. But that's only one of the things going on here; the family has several secrets, and you can bet they'll all be revealed before the final page.

A Spool of Blue Thread was shortlisted for the Booker Prize, among its many accolades. I enjoyed the book, but I wondered whether the Booker nod wasn't as much for her career as for this book in particular. Maybe when I read it, I wasn't in the mood for a book about a quirky but charming American family, one with plot threads that weave around each other to create a fabric rather than racing toward a finish line. There's humor and heart here, but not enough to make me love the book Suffice it to say that I've read a few of Tyler's books, and this one isn't my favorite. (That would be The Accidental Tourist.)

Recommended for readers who enjoy meandering family sagas with moments of humor. 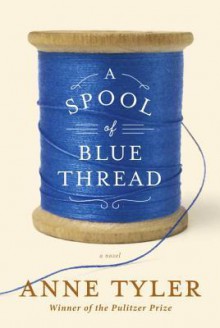 Tyler's story encompasses three generations of the Whitshank family, wandering back and forth over 7 decades of the 20th century. “A Spool of Blue Thread”, is Anne Tyler’s 20th novel. It also happens to be the first novel of hers I’ve ever read. I wanted to use my unfamiliarity with Tyler as an asset.

This intimate portrait of middle-class life stumbles heavily on clichés. Some would say the author writes with witty economy of words I would say she is long winded. “A Spool of Blue Thread” walks a thin line between moving and the banal. The style has a warm and lucid prose but verges on the sentimental or cloying. We have traumatic episodes from the past detonated at intervals but the impact is muffled by a very calm narrative. The family life is told by its members in multiple versions of reality past and present. This novel is definitely character driven and very homey. We have a plot zooming on parents, their relationship with their children and grand-children, their house neighborhood and friends. Although a lot consists of logistics undoubtedly true, it is not especially thrilling to read about.

I found this novel very wobbly. I had a hard time staying focussed all through its 350 pages or so. Some also say tads of humour lay between the lines, I never saw this at all. Definitely I lack any sense of humour. Maybe I am on the left field with my views since most people love Ms. Tyler books immensely. Again I am part of an exceptional group of none fans…..

By now you may sense I wasn’t too thrilled with this book and you would be right. Of course this is my opinion only and is to be taken with a grain of salt. In no way do I want to offend any friends or readers in not sharing positive thoughts on this book. Reading a story may resonate for someone in a personal or emotional way. This story definitely will do this.

“A Spool of Blue Thread” has not provided the kind of story I enjoyed. (my lost)

My god it was dull. I get that it's supposed to be one of those insightful sketches of Ordinary Realistic Families (TM), but did the prose have to compete with the subject matter in its quest to do away with any limits to banality?
Like Reblog Comment
show activity (+)

I am guessing, based on some of the reviews I’ve seen of this novel online, that you are either a fan of Anne Tyler or you’re not, there doesn’t seem to be a whole lot in between. I would count myself a fan, though apparently this is the first new title of hers I’ve read since joining Goodreads / Booklikes a couple of years ago.

In any case, this is a typical Tyler novel, a gentle read about family adjusting to loss and aging, and nostalgic for the events that brought them to that point. According to the publisher’s description, “The Whitshanks are one of those families that radiate togetherness: an indefinable, enviable kind of specialness.” This sounds great in theory, but I really don’t think it is an accurate description of the book. For one thing, their ordinary dysfunctions were what appealed to me most — and their differences, which made them individuals, were not always enviable. Despite their differences, or maybe because of them, Tyler has produced a poignant, nuanced work that weaves together generations, creating characters that live and breathe, endure tragedies and celebrate triumphs. She returns to her beloved Baltimore, and the setting is as much a character in this book as any of the Whitshank clan. There is no overarching drama or plot twists here, but there are tears, disappointments, thoughtless words and plenty of laughter. So yes, a lot like life, only maybe a teensy bit better with such a pretty cover.