Log in with Facebook
or
Wrong email address or username
Sign up
Already on BookLikes? Log in!
Incorrect verification code
Please, check your email, the code to access your BookLikes blog was sent to you already.
Enter code:
« Back Send
back to top
Search tags: absolute-transmetropolitan 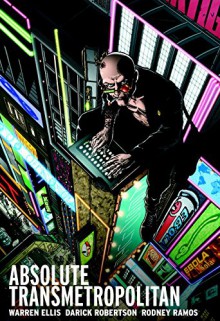 The medium of comics doesn't just revolve around superheroes alone, its a medium of the artistry and writer to express what they intend to give comic readers that illustrations is not just a man in a cape or a woman with a sword and a shield. Its about writing a good story, with illustrations that really tells a good story that doesn't talk about super powers but a story that talks about without them. I have been a fan of Transmetropolitan before The Authority or The Planetary, two most iconic comics that deals with some what superhero themes. Transmetropolitan is none of that - its about in the future and the people living in a nameless city in the perspective of one Spider Jerusalem, maniac psycho journalist who hates this place. A place where the citizens prefer to believe lies and fantasies and escape the reality of their troubles by shooting up drugs that are legal even if it harms the body, program shows like Sex Muppets that are shown to children is allowed and beating up an old woman who hassle a stranger is okay. No, this is just the side of what Transmetropolitan is - for its actual purpose of reading Transmetropolitan is about how we deal with the truth we kept denying to ourselves.


Collecting from issues #1 to #18, a short story from Vertigo: Winter's Edge #2 and I Hate It Here one-shot special, the Absolute Transmetropolitan Vol.1 is an absolute version to get as it includes not just the above I mention, but also some extras worth reading. To me, this is one edition I have been waiting for to get and when I finally get my hands on it, it completes what as a fan would say, the ultimate edition to own. What is it about? I am sure you have read some of the other reviews by now about this series but I will definitely do a write up but not here - some where where I will be comfortable with to do an absolute writing of Transmetropolitan but for now, this deserves my highest rating. Good binding with a slipcase and oversize, this is one edition that is a must get.