Log in with Facebook
or
Wrong email address or username
Sign up
Already on BookLikes? Log in!
Incorrect verification code
Please, check your email, the code to access your BookLikes blog was sent to you already.
Enter code:
« Back Send
back to top
Search tags: class-divide 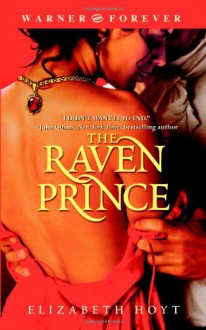 I hadn’t had much luck w/ audiobooks in recent years so was thrilled to discover Moira Quirk, narrator for the Darkest London series by Kristen Callihan. Then a kind soul in a certain HR group mentioned that Ms. Quirk also narrated Elizabeth Hoyt’s Prince Trilogy.  It had been a while since I read that series so figured to kill 2 birds w/ 1 stone by doing a re-read via audio.

I remember liking ‘The Raven Prince’ well enough (after all, I continued to read the subsequent books) so the story itself would probably fall around 3-3.5. IMO, it's still one of the better Beauty & Beast storylines, with sympathetic main characters & a varied cast of likeable secondary characters. Altho certain things didn't ring true for the Georgian period, I tried to overlook most by repeating the mantra 'country life is more informal'. And last but certainly not least, the sexual content of this book was much franker/more explicit than I remembered. *grins*

However, I ended up *loving* ‘The Raven Prince’ due to Ms. Quirk’s narration. Granted, I don’t have as many ABs ‘under my belt’ as some of my friends but IMHO, the term ‘voice actor’ truly does apply to Ms. Quirk. She is simply fantastic at breathing life into both general narrative and dialogue, as well as maintaining sufficient tonal differences to make dialogue easily discernible, especially amongst several characters. IDK why but her diction & cadence/inflection suit my ears perfectly.

To the ever-lasting bafflement/frustration of TPB in publishing, I suppose that opinions & preferences re: AB narrators are probably just as personal & quirky as those for books in general.  Having made serious efforts in recent months to incorporate ABs into my reads, I’ve come to realise that I prefer narrators w/ natural inflection and somewhat normal talking speed.  (Frex, Davina Porter is another fabulous narrator but Good Lord, it would’ve taken me months to re-read the Outlander series via audio.  The books are long enough but tack on audio format + her narration speed? Alas, ’twas the unfortunate kiss of death for me.)  And yes, I may have a minor bias towards UK-accented English. :)

Have never read Hoyt’s Prince Trilogy or it’s been a while since you read it? If you haven't listened to any of Ms. Quirk's voice works, I strongly recommend that you give ‘The Raven Prince’ a go via audio. This is an entertaining enough novella about the beautiful and gently bred Diana Highwood thwarting her mama's ambitions to marry her off to a lord when she falls for the village blacksmith instead. Their story is sweet, for what it is. However, the novella ends with the wedding, even though the really interesting part of a romance involving such significant class and social divisions is not how the lovers come together but rather how they can find a way to stay together once reality sinks in. I enjoyed the first half fairly well, though the street urchin-attracts-gentleman trope is always hard to take seriously, and why must so many historical romances involve lovers trying to catch a spy?! Still, the first half of the book was worth the read just for Meggs' chameleon-like character shifts, her gift with dialect and changing appearance. Once the spy was unmasked and the lovers celebrated by consummating* their attraction, though, the plot kind of went off the rails: everything was too convenient, and the happily ever after, when it comes, is too hasty to be satisfying.

*The hero is a virgin. I know some readers lurrrrve that male virgin trope. (Not me. I don't care for manwhores, but I like it when both main characters know how to use the equipment.) Madeleine Greenway might be my favorite Regency-era heroine ever. Lots of romances feature plucky, spunky, opinionated heroines, but never have I come across one as independent, as skilled, as smart, and as competent as Mrs. Greenway.

This book is chock full of dramatic tension to make readers feel ALL the feelz: Colin Eversea's despair and resignation as he climbs the gallows to be executed for a crime he didn't commit, the exhilaration of his unexpected rescue, the horrible, sick suspicion he feels when it looks like his downfall may have been orchestrated by his oldest brother, who is engaged to the woman Colin has loved since childhood... (and all this just in the first few chapters).

My only complaint is that Colin's attachment to his childhood love lingers even after he and Madeleine have become intimate and it's clear they belong together, which felt disloyal to both women, though of course it all comes out right in the end. I liked the first half of this book but not the second half. The hero and heroine develop such a nice, believable bond of friendship and blossoming love early on, and then the hero ruined it by becoming a totally different person. Seriously, it's like he was kidnapped and replaced by a goblin changeling 2/3rds of the way through the book. At first, he's sensitive, observant, thoughtful, confident, appealing, sexy... And then he becomes manipulative, secretive, selfish, insecure, distant, and almost too stupid to live. Very disappointing!