Log in with Facebook
or
Wrong email address or username
Sign up
Already on BookLikes? Log in!
Incorrect verification code
Please, check your email, the code to access your BookLikes blog was sent to you already.
Enter code:
« Back Send
back to top
Search tags: crime-detective 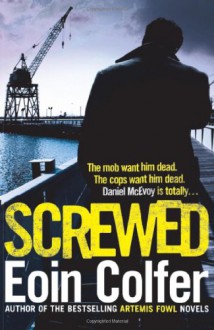 At the beginning the amount of bad wise-cracks is overwhelming, but when some semblance of lot starts atters improve. I'm not sure Colfer's absurdism is really the greatest match with noirish crime fiction, though. Works better with smart-alec centaurs, teenaged criminal masterminds and fairies out to smas the Patriarchy. 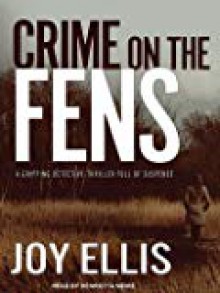 This is my first Joy Ellis book. I have a few more in my TBR pile.

I'm enjoying the storyline - it's fresh and I can't see where it's going and it's avoiding being exploitative.

I quite like the two detectives, each with their "secret" pasts that they share with each other before the book is halfway through.

I can see that this would make good television.

But where was Joy Ellis' editor? How could s/he let so much boiler-plate, cliché-ridden text through just to keep the story moving? Do we need to know that one of the policemen has steely-grey hair? Or that another "slips like a shadow across a wall" or have a description of a major character's interior dialogue that reads like stage directions?

I can see how all of these things might be there in a first draft as the writer fully imagines the action. That they made it to the final draft is disappointing. I'm hoping the next books are better.

It also doesn't help that the narrator of the audiobook can clearly see the pieces of flat prose and tries either to speed through them or give them an inflection-free delivery.

If you've read Joy Ellis, let me know, does it get better? 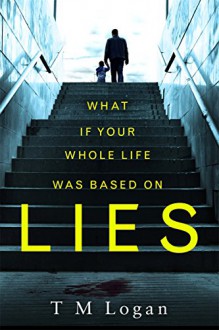 Thank you to St. Martin's Press and T.M. Logan for the chance to read LIES in exchange for this honest review.

Note to married people: if your spouse can't listen to you for the length of a meal without scrolling around and posting on Facebook/Goodreads/Twitter/etc constantly, you need a marriage counselor. If you don't heed this warning, you may find life increasingly unpleasant.

Such is the life of our pal Joe Lynch, who stumbles his way through this book like a lost puppy, all snarls and grins, deciding to protect people who haven't asked for his protection, then getting angry when things don't go as he has decided life should go.

Unfortunately, I figured out by location 202 (4% into the book) who one of the culprits was and at 24%, I'd seen the entire plot without wanting or meaning to do so. The writing drops hefty clues that are actually spoilers. By the end I was irritated with our narrator and had the uncharitable thought that he deserved to be preyed on because he constantly did exactly the opposite of what any reasonable adult would do (and the opposite of what every authority figure -- his lawyer, police, random strangers...) tell him to do.

The second irritation (shown by constant notes that got less detailed as the book grinded on repetitively) were plot holes. I felt like the ending had been predetermined and the rest of the book was shunted in to make that ending fit, no matter how far from realistic we had to go to get there.

The payoff or "lesson" in all of this are gems like:

...it's not the photographing and sharing and broadcasting that makes something what it is. it's the doing. The being. The experience of it.

Needless to say, I found very little mystery and far fewer thrills. The mystery for me started to revolve around how long it would take for this fool to stumble into the guaranteed safe landing he was headed for -- because that's the kind of book this is. I wouldn't have finished it if I'd payed for a copy, and I would have probably returned it to the library none the poorer for having missed this one. 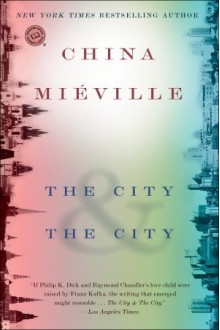 This book... oh dear. It's quite good and it's very hard to explain. What starts off seeming like a noir-ish crime novel or police procedural opens up and allows the reader to sort of play with what's happening in the reality of the story. Two city-states, somewhere in Europe, live within each other. Citizens from one are not allowed to "see" the citizens from the other - even if they're on the same street! It's not like Berlin used to be. There's no wall, just a map and laws and a history of strife between the two cities.

So is it fantasy, or is it a meditation on our current cities, where we go around "unseeing" all sorts of things? Miéville leaves this question wide open for the reader. I started to think about all of the ways we divide ourselves in our cities and how the entire novel could be a metaphor for things like race, class, religion, politics, you name it. Everywhere in real life, there are places some people go and places other people don't. There are things we see - even celebrate - and other things we pretend not to see, and put out of mind almost automatically. We're very good at dividing ourselves up in so many ways. Citizens in one city know not to tread on "the other city."

The book takes us into a mystery about the cities themselves, all while continuing along the crime narrative. It's sort of brilliant, and very different from any other book I've read before. It's fantastical, but it could be quite realistic. I have to wonder, once again, why some authors (Miéville, Neil Gaiman, even Stephen King) are not even considered in these lists of "important" books. King appears sometimes, but far too often I think these writers tend  to be shunted off into "genre writing" and hence considered simply not worthy of being noted by certain publications and literary circles. I'd love someone to tell me why this book is somehow less inventive/important than Thomas Hardy's 8th or 10th book? (Not just Hardy - I'm thinking now of those lists of books that have changed or disrupted the novel's form or literary prizes that always seem to go to the same people or if they go to a newcomer, we're told it's because the book is somehow inventive. I've read the most recent Pulitzer. I liked it, but it wasn't more inventive than this one.) When I read a book like this one, all I see is invention and imagination and certainly breaking the usual laws of novels.

I've tried to read The City & The City before and was distracted by work and life. I'm thrilled I finally found the right time for me and this book because it is fantastic - in every sense of the word.