Log in with Facebook
or
Wrong email address or username
Sign up
Already on BookLikes? Log in!
Incorrect verification code
Please, check your email, the code to access your BookLikes blog was sent to you already.
Enter code:
« Back Send
back to top
Search tags: crystals 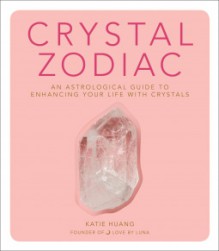 This is the first book I've seen that melds crystal healing with astrology. Interestingly, I've recently been reading a book on Ayurvedic medicine and found precedent for this combination there. It starts off with some very basic information about astrology that would be useful to someone totally new to the subject, but already familiar to anyone who has read anything else about astrology.

This is followed by similarly basic information about crystals, but this veered into belief rather than practical instruction and I found it of little use. After a bit of woo, it got to the part I was looking for; segments on astrological placements and which stones would be useful for specific purposes.

It goes through each of the twelve signs, giving an overview followed by small segments about the significance of the Sun, Moon and Ascendant, assigning stones to each, then covers the "personal planets", Venus, Mercury and Mars. The book does not address the outer planets but explains how they are slow moving and tend to affect generations more than individuals.

It gives a few basic spells, mostly based on visualisation and covering basic things like love spells, communication and personal insight. While I found the information a bit light, I did see it as useful and would certainly recommend it to someone new to these subjects and of use to people wanting to expand work with crystals. 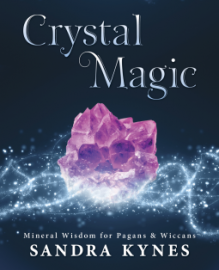 This is a Llewellyn book, definitely targeted at Pagans and Wiccans and about using crystals in magic to enhance magical ritual with the use of crystals.

Unlike a lot of books of this kind, it has a wealth of practical information that would be of interest to anyone interested in gemstones or any mineral that might be used in jewellery. There is some history of the use of gemstones in medicine as well as cosmetics and information about their constituents, followed by a science chapter that I found very interesting indeed. This included information about how crystals help to support life and how crystals are formed and reformed in nature. Also about crystal structures and non-mineral crystals like Amber, jet and petrified wood. The information about optical properties of stones was especially fascinating.

There are many pictures in black and white, but of such good resolution that they work in a book where color might have been expected.

Chapter 3 is about Selecting and Preparing Stones. This one hit my 'new age' meter and I questioned some of the advice, particularly about putting salt water on stones. For many that will do no harm, but opals, especially Ethiopian opals, would lose their color, at least for several weeks.

Chapter 4 on using crystals in magic, however, mostly impressed me. There was some good advice for charging crystals and color correspondences given that actually matched up with older information about associations. I liked the explanation of crystal grids, though I've heard of this idea before.

There were two things I thought needed a warning. One was that you should never stare directly at a candle flame during a divination as it can harm the eyes. I can see the method of watching the flame through a clear stone working okay if the stone was big enough, but I did feel some caution should have been given about keeping the flame completely behind the stone at all times.

The other thing was about using oils. Oil an opal and it will lose its color forever. Other than that, the part about herbs and oils was very interesting as was the mention of the significance of birthstones, though it seemed to skirt around some of the disagreement about which stones belong to each month.

Much of the book is a compendium of stones, giving information about more that a hundred varieties of minerals. It was strong on history and description, but didn't give hardness index.

Appendix A deals with magical properties of stones, while Appendix B lists associated deities. I'm not knowledgeable enough to judge the accuracy of either of these, but found the information interesting and the extensive bibliography suggests that the author did a lot of research.

Over all this was a very good book on the subject with its strengths being on history, science and thoroughness. I may well get a hard copy to keep on my reference shelf.

Chakra stones are types of stones that are used to maintain all the chakras of your body. These stones help you to maintain a proper physical and mental health by keeping all your chakras balanced and healthy. Since our body is controlled by these chakras, it is very important for you to balance those chakras in order to stay healthy. You can visit Gemstone Export to know more about chakra stones and their benefits.

Chakra stones are types of stones that are used to maintain all the chakras of your body. These stones help you to maintain a proper physical and mental health by keeping all your chakras balanced and healthy. Since our body is controlled by these chakras, it is very important for you to balance those chakras in order to stay healthy. Physical wellness is something that is at the peak no matter how and what you do.

Areas where to place chakra stones in your body

There are certain ways through which you can use chakra stones in order to keep your chakras balanced and to reap the maximum benefits. Below is the list of place where you should put chakra stones:

If you place the chakra stone on the above mentioned place then you can easily help your body and chakra to maintain balance. Moreover, you should also use the chakra when you are fresh or not feeling uneasy as it may have adverse effects on your body. You can visit Gemstone Export to know more about chakra stones and their benefits.

Gemstone Export is one of the leading manufacturers, suppliers and exporters of high quality gemstones of different types and varieties which includes New Age & Metaphysical Products, Gemstone products.