Log in with Facebook
or
Wrong email address or username
Sign up
Already on BookLikes? Log in!
Incorrect verification code
Please, check your email, the code to access your BookLikes blog was sent to you already.
Enter code:
« Back Send
back to top
Search tags: eberron It's a solo show at the bookstore, minding phones and e-mail, but I have fuzzy company: 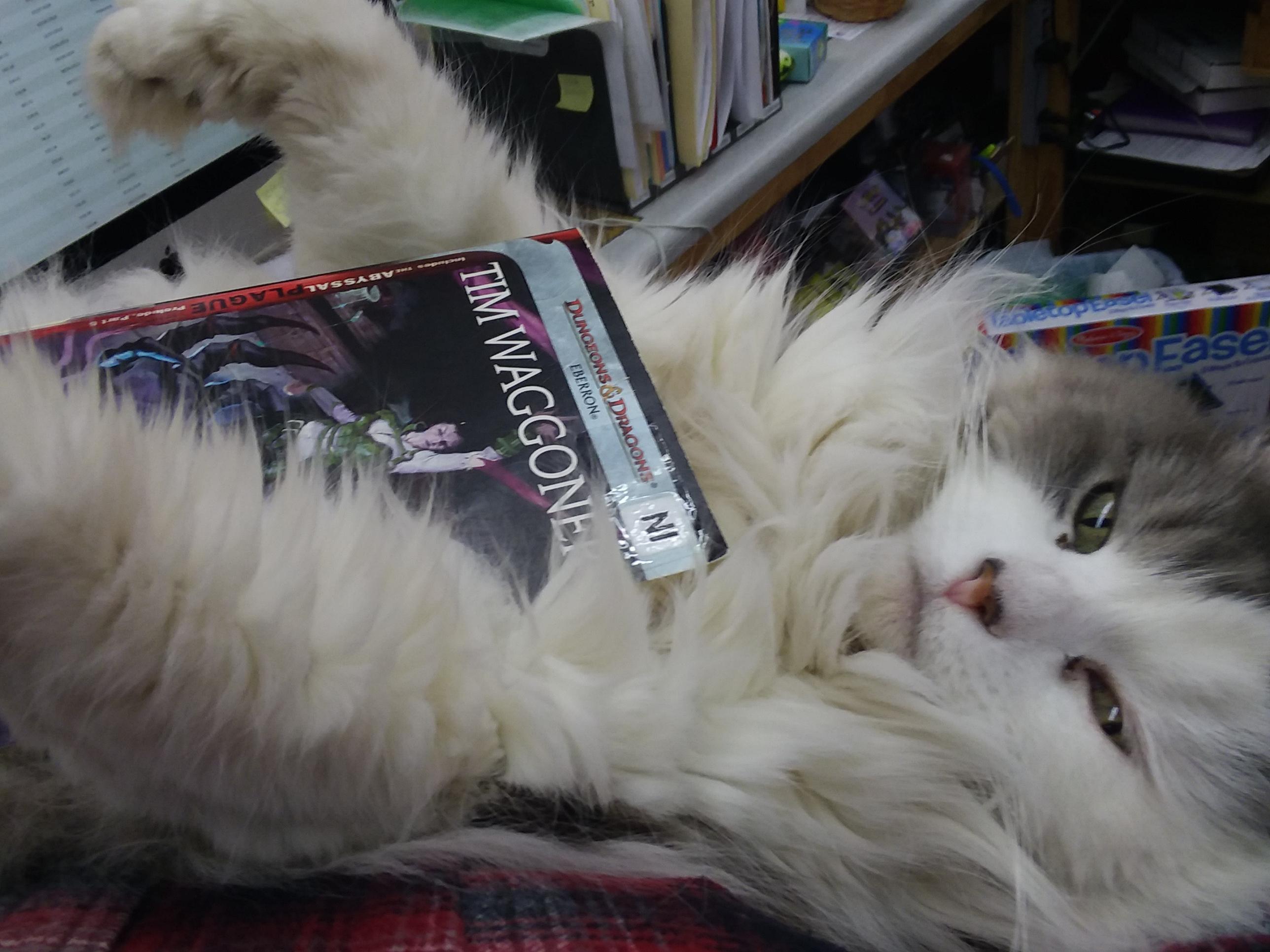 Bella, the store cat, is a big softy.

Lady Ruin by TIm Waggoner is a late Eberron novel, and so far, so good. 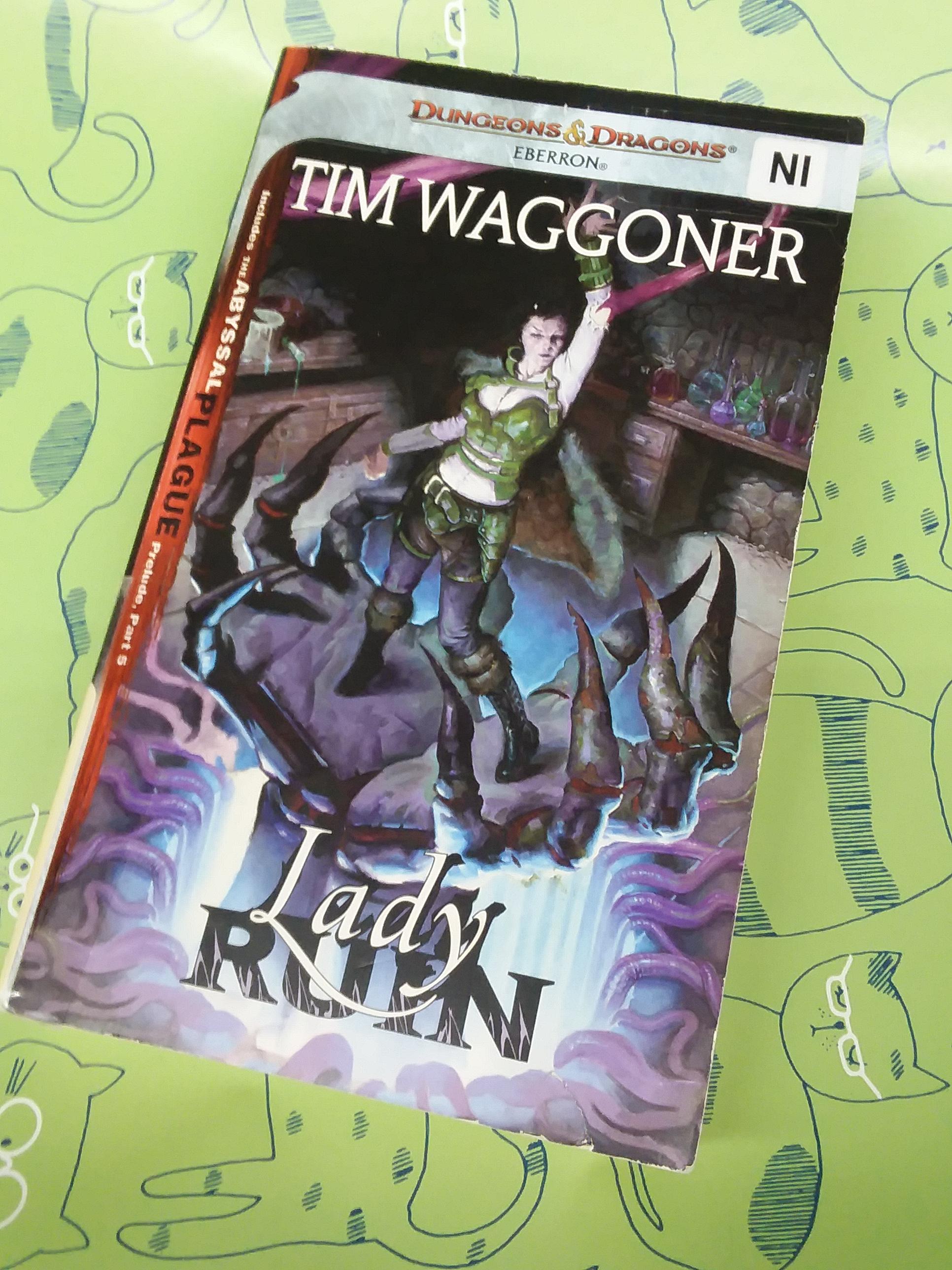 Mostly though, I've been digging in the DVD drawer and rewatching old favorites 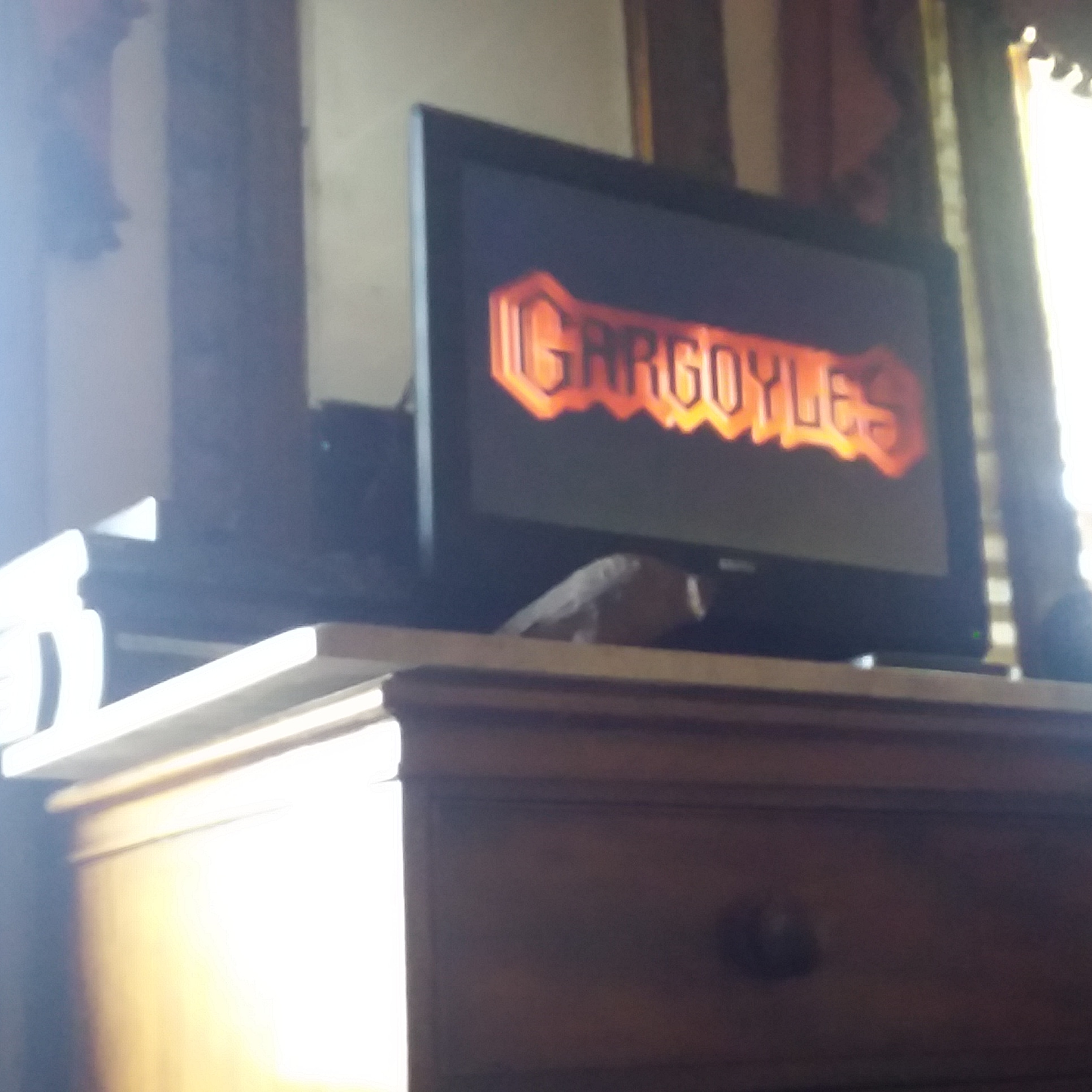 After the climactic fight with the dragon Dah'mir, Singe, Geth and Dandra retreat to Zarash'ak to recover. With them for the long haul now are the half-orc Natrac who has his own secret past, and the young orc Gatekeeper druid Orshok. Best of all is the former Bonetree hunter Ashi who transformed from a leading stooge into an ally to the cause. Bassingthwaite has a tendency to treat all of his characters as opportunities, they serve a function to the plot, but at any time a casual encounter with an NPC turns into an important character. It makes the reader pay attention and adds depth to the world and the story.

I loved the time spent in the 'City of Stilts', Zarash'ak is the unofficial capital of the independent territory of the Shadow Marches. The story also leads on to the nation of Droaam, a nation of monsters. A clue in the oral tradition of the Bonetree people points the party into that nation to get ahead of Dah'mir's plans to free the powerful Daelkyr Master of Silence from its ancient prison. The threat of the Daelkyr and the close proximity of various planes of existence - some defined by elements such as air or fire, others by concepts such as dreams or madness - is well expanded upon.

Geth and Singe are beginning to trust each other, but their mutual past comes back to haunt them and there are secrets that must come out if their mission has any chance of success. Look out for new, unexpected allies. I don't want to spoil things, but I was especially impressed with the chilling development of the Lyrandar ship's captain as he's drawn further into the madness of the plane of Xoriat.

Give me ancient ruins and prophecy any day, this is still some of the best fantasy to come out of Eberron.

Next: 'The Killing Song' Eberron is celebrated for its urban settings, magically infused technology and the sentient construct Warforged. There are other layers to the setting, however, and Bassingthwaite takes full advantage. There are elemental-powered ships, and Sharn is a known location, but the story delves into the deeper lore of the ancient Hobgoblin empire that predates human civilization by thousands of years and the extraplanar struggle that destroyed it.

The first volume of the 'Dragon Below' trilogy starts in the rural nation of the Eldeen Reaches. Dominated by forest and governed by druids, it held itself apart during most of the Last War once it had established its independence. The action continues in another neglected area of Khorvaire: the Shadow Marches, the marshy homeland of most orcs.

This is one of the most interesting Eberron series yet. On top of the little-used settings, Bassingtwhaite has a great party of characters - the shifter Geth on the run from a shameful secret, the fighter/wizard Singe who has been seeking him out, and the Kalashtar on the run from a sinister cult. Everyone has secrets. A great fantasy that highlights the diversity Eberron has to offer.

Next: 'The Grieving Tree'