Log in with Facebook
or
Wrong email address or username
Sign up
Already on BookLikes? Log in!
Incorrect verification code
Please, check your email, the code to access your BookLikes blog was sent to you already.
Enter code:
« Back Send
back to top
Search tags: granite-noir-fest

Festival is off to a great start.

Just had a fun evening listening to Abir Mukherjee talking about his books, and am actually really intrigued by them now.

And of course I'm really looking forward to the other events I'm attending this weekend, too! (I'm still trying to get a couple of friends to do the Mystery themed escape room with me...)

The Why Didn't They Ask Evans buddy read is still on tomorrow, tho!

Well, it is Sunday, and this is a post, but as some of you may have noticed, I have been out and about enjoying this year's Granite Noir Festival this weekend. The Granite Noir Festival is a short local event that celebrates crime writing - with lots of readings, author meets, workshops, tours, theatre, exhibitions, etc. For such a relatively small interest group in this rather remote part of the world, there was a lot to see and do.

I have already written about the author event last night, with Hugh Fraser and Robert Daws, and I had planned to join the conversation with Val McDermid on Friday night also, but may have fallen asleep on the sofa after work... Um, yeah. Never mind.

Anyway, the main event for me this weekend took place tonight in the rather snazzy restaurant of our local theatre - A Poisoned Cocktail Party hosted by none other than Dr Katheryn Harkup, author of A is for Arsenic (which you've probably heard me gush on about in the past)  and Making the Monster (which I am currently enjoying).

So, here is the twist ... Instead of our usual Sunday Soup feature, I will share some of the cocktails with you.

The idea was that with each "round", Dr. Harkup would tell about some of the ingredients and what made them poisonous and present stories - mostly of a dark but humorous nature - about the use of the poison. Btw, these were not all the same ones as described in A is for Arsenic, which made for an added bonus of interesting trivia.

First off, we had this one: 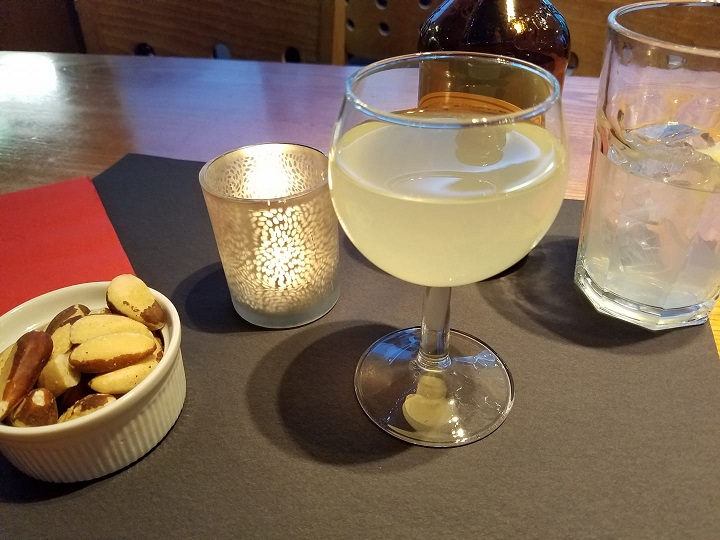 This was a concoction of gin, Cointreau, and absinthe (or rather essence of absinthe), with a shot of juice (can't remember which one but there was a slight hint of grapefruit).

The cocktail itself was not a winner for me - it was remarkably bland.

However, the story of how absinthe was used and how the thujone, the compound in the ingredient wormwood, can be toxic and lead to hallucinations and convulsions. There is, apparently, very little of the stuff in absinthe, and most of the problems with absinthe may have been caused by the high percentage of alcohol in the drink - but it was interesting to hear that Victorians also added copper compounds and other things to the drink to get the green colour. And those added impurities may actually be a cause of concern of their own.

We also heard about Brazil nuts, which may, apart from selenium, also contain uranium, depending on where they have grown. Delightful.

In Round # 2, we were given this yummy looking duo: 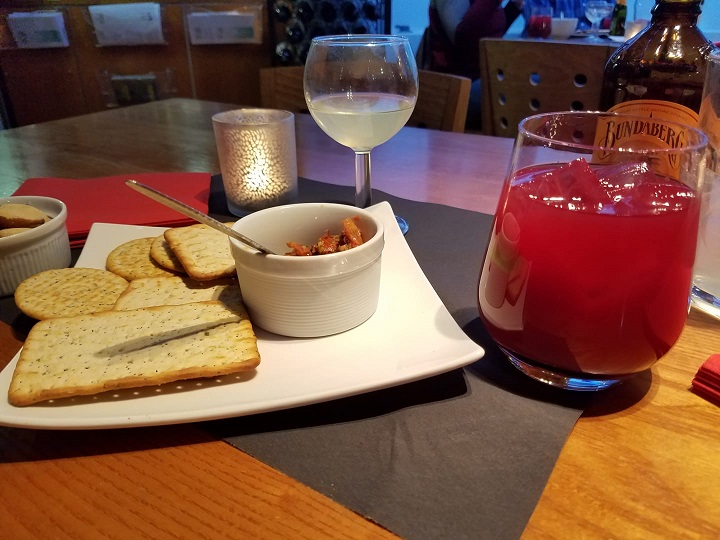 That is, tapenade with poppy seed crackers (to soak up some of the %), and a blood orange and amaretto cocktail - which was delicious.

Let me just say, there was nothing to worry about with the olive dish.

The drink, of course, provided the anchor for a discussion of cyanide, which was one of the poisons described in A is for Arsenic that I found particularly fascinating. It is fast and effective, and horrible. And yet, cyanide compounds are in so many things other than bitter almonds, cherry stones, apricot stones, and apple pips - but it is the reaction with stomach acid that causes the problems. (Btw, apparently one would have to ingest about 200 apple seeds before the getting into trouble.)

The poppy seed crackers led to one of the most elaborate discussions of the evening - which was all about opium and its derivatives morphine and heroin. It still shocks me that heroin was prescribed as a "non-addictive" painkiller and given over the counter to anyone, including teething babies.

Lastly, we had this one: 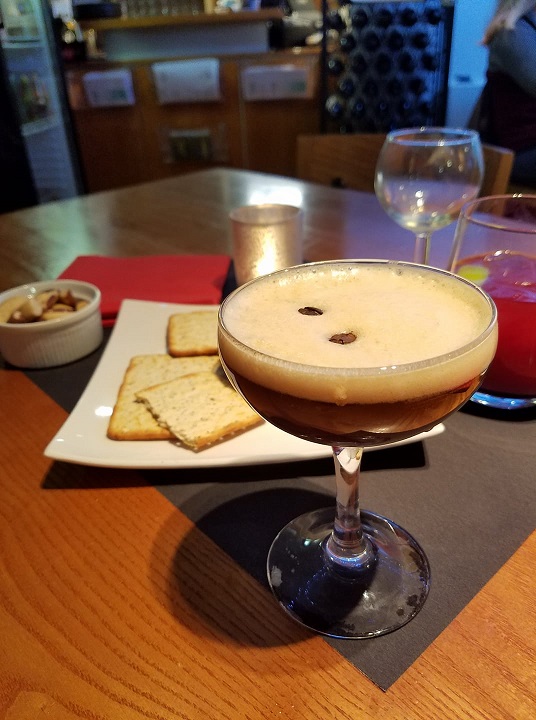 I have no idea what was in that other than some coffee-based liquor like Kahlua or Tia Maria. I don't drink a lot and was already struggling with the previous two cocktails at this point. (I could, of course, have opted for the non-alcoholic versions on offer, but ... nah... )

The cocktail was ok. I was far more interested in Dr. Harkup's discussion about caffeine. It is also a neurotoxin, but it is so prevalent in our diet that most humans have build up some sort of tolerance to it. However, there has apparently been an experiment where  spiders were given different drugs and the scientists observed the effect on the spiders' web spinning skills. Apparently caffeine messed them up tremendously.

Read more about this here or here.

What have I learned from this evening? Buy your cyanide fresh and take your coffee seriously!

In all seriousness, tho, this was a brilliant event and I can only recommend that, if you have the chance, you go and see Dr. Harkup talks or read one of her books.

But then, you already know that I'm a fan. 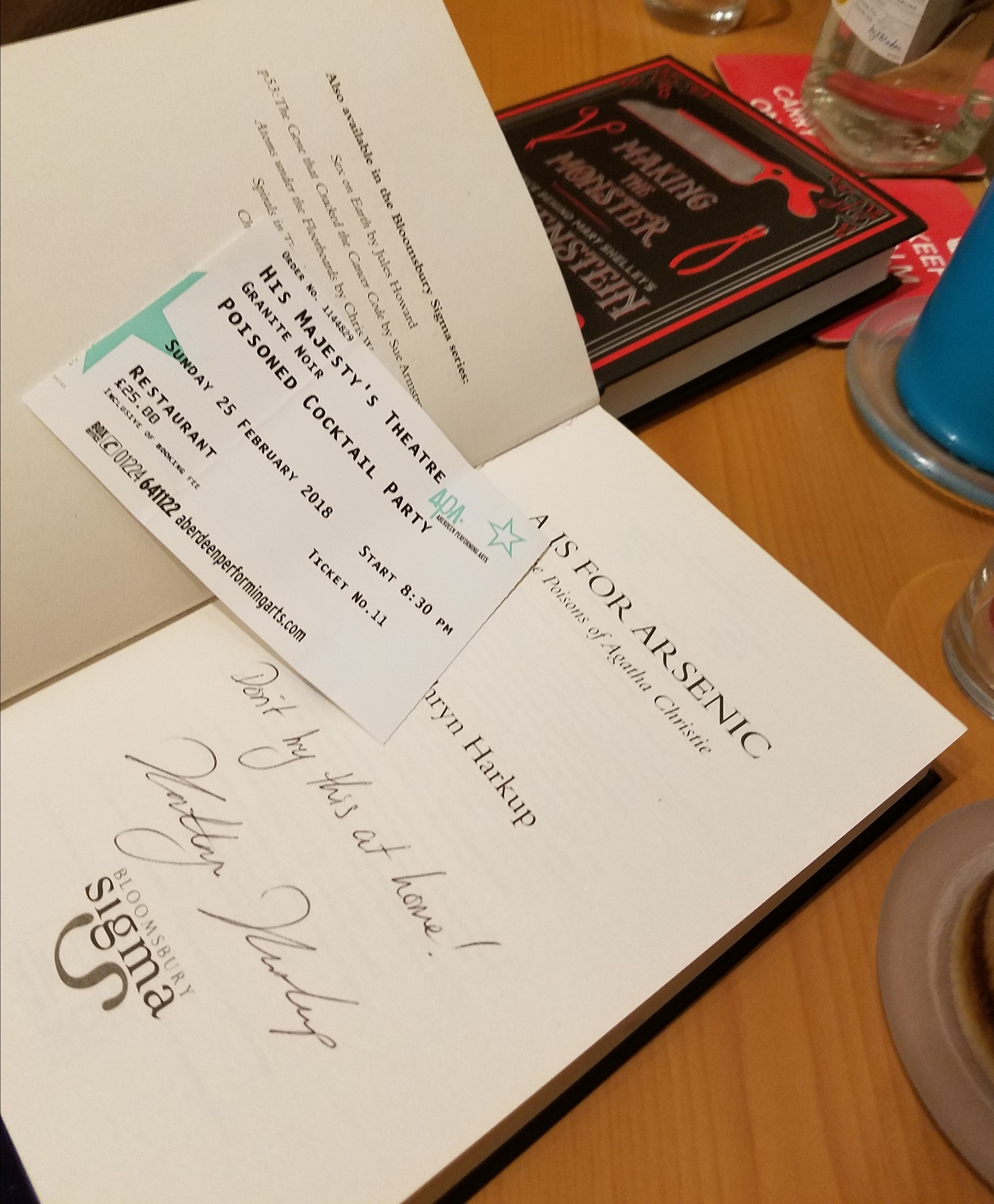 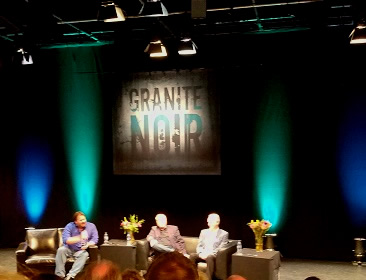 I know this is a crappy picture. Sorry.

The talk with Hugh Fraser and Robert Daws this afternoon, however,  was quite a lot of fun.

It all started with a spotlight on a local author, John Bolland, who was given a chance to read a few pages from his own work - a crime novel written in Doric, which sounded like it was going to be an entertaining read. I need to find out if it was published, yet, or still in progress.

This was then followed by an interview of Robert and Hugh - with Robert doing much of the talking, I thought - and a follow on Q&A from the audience.

It was fun. Both actors are well at home with interviews, both have a great sense of humour, and a very down to earth, approachable manner. They clearly enjoy their new career as crime fiction authors.

As enjoyable as it was being part of the event this afternoon, there was very little I have learned in addition to what I had already read about the background to Hugh's series. Except maybe that Lizzie, the dominatrix/prostitute girlfriend of his main character Rina, was based on a friend of the author's. And that he used to work (playing in a band) in some of the dives in Soho that are described in the books.

I was somewhat glad to hear hear about his motivation for some of the plot/character choices in his books, as I had some issues with them (mentioned here and here). I still have issues with some of these choices - the, what felt to me like, gratuitous sexual violence, the depiction of some scenes, the lack of decent make characters - but I get what he was trying to do, and I still maintain that the Rina Walker series is a fun romp of a read (just with added "eeww" and "wtf" factors).

Apparently, I was not the only reader who was knocked sideways by the books. The interviewer was quite shocked by the fact that this had come from the man who portrayed the quiet and genteel Captain Hastings for decades - these books are as far removed from the image of Arthur Hastings as you can get. A turn that Hugh said was not planned by him, but just happened that way when he first "met" Rina "walking into that hotel in Acapulco, the opening scene of the first book Harm.

With respect to Robert Daw's books, I cannot say much. The setting in Gibraltar does sound interesting but I have not read the books. I may have a look at the library later next week.

I leave with one of the funniest parts of the Q&A, when a lady in the front row prepared her question with something along the lines of "I don't mean any offence but you both are gentlemen of a certain age. What motivated you both chose much younger, more attractive women as your main characters ...?"