Log in with Facebook
or
Wrong email address or username
Sign up
Already on BookLikes? Log in!
Incorrect verification code
Please, check your email, the code to access your BookLikes blog was sent to you already.
Enter code:
« Back Send
back to top
Search tags: katherine-arden Here is the thing: I wasn´t sure if I would like this book or not. So I grapped it for free from my local library and gave it a chance.

And guess what, it isn´t my thing. And it´s not because it is a bad book in itself, I think (based on the first 17%) it´s just one of these style over substance books that aren´t for me. Yes, there is a lot of beautiful prose and atmospheric writing within these pages, but I´m bored stiff by the plot and I couldn´t care less what is happening to the characters. This was a fantastic haunted house story for the middle-grade set but it should appeal to a wide range of readers. This is the second book in the Small Spaces series but it could be read as a stand-alone despite the fact that events from the first book are discussed. I really enjoyed the spooky feel that this story had and found that I was really eager to see how things would work out. All in all, I thought this was a well-done novel.

Ollie, Coco, and Brian are off on another adventure. This time they are headed to a ski resort with Ollie's dad and Coco's mom. There is so much snow that they are the only ones that are able to make it to the resort. Things at the resort are less than ideal because of the storm but they are determined to make the most of it. There is some excitement with the addition of a new guest that knows some of the less than positive history of the resort.

I loved the spooky atmosphere of this story. I was worried about these kids anytime they went off by themselves in the resort. Learning the things that happened in the building before it became a ski lodge only added to the creepy feel. Ollie, Coco, and Brian are all great characters and I love their friendship. They really do watch out for each other when it is necessary. I wasn't sure how things would work out but it was nice to know that these kids were in it together.

I would recommend this book to others. I started reading this series because I love Katherine Arden's writing and wanted to read more of it. I picked up this book because of how much I enjoyed the first. I found this to be a creepy and atmospheric tale filled with fantastic characters. I can't wait to see what happens to Ollie, Coco, and Brian next!

Initial Thoughts
This was a fantastic haunted house resort book for the middle-grade set. Ollie, Coco, and Brian are all great characters and I am glad that parents were along for a portion of the adventure. Ollie and Coco really shared the spotlight in this one and it was fun to watch them figure everything out. 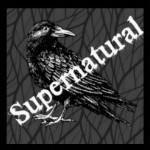 Supernatural Square: Three friends find themselves snowed-in at a haunted ski lodge armed only with a Ouija board and a book of matches.

Ollie, Coco and Brian have tried to put what happened in the land beyond the mists behind them. When a free trip for five is won to a soon-to-be-open ski mountain it seems like a great opportunity to have fun and get away from reminders of the past.

A blizzard is hitting the Vermont mountains especially hard and the expected 8" overnight, heavy enough, becomes a big enough storm to prevent the other guests from arriving at Mount Hemlock, and traps them in the building without no power and only a single fireplace.

No one but Coco sees the man in the road warning them away from the lodge. When the car is stopped, he's disappeared. The taxidermy collection in the lobby seems to keep shifting positions on their wall-mounts and pedestals. The lodge itself has a dark past as an orphanage run by the stern 'Mother Hemlock' and not all the girls made it through the cold winters.

Snowbound, the trio, two parents, the lodge owners and a paranormal journalist, have to confront the ghosts in the dark halls armed only with a Ouija board, a book of matches, and a talent for chess. Ollie's wristwatch, through which her dead mother communicates to her, tells her to beware....

This was another good middle grade horror by Katherine Arden. In many ways this is Coco's book, as it showcases her talent for chess and logic, her mediating role and provides some outside perspective on Ollie's relationship with her dad.

The story skates on the edge of being too simple, but the puzzle was a good one, and the internal logic of the story and the world of 'Small Spaces' is respected. The characters are continuing to grow and with some unanswered questions, I see a lot of room for more sequels down the line.