Log in with Facebook
or
Wrong email address or username
Sign up
Already on BookLikes? Log in!
Incorrect verification code
Please, check your email, the code to access your BookLikes blog was sent to you already.
Enter code:
« Back Send
back to top
Search tags: mercyamare 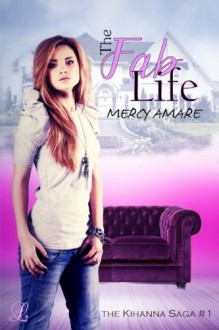 The Fab Life follows Kihanna as she discovers her father isn't a lowlife as her mother always told her, but a billionaire. Sent to live with her new-found daddy with no explanation, Kihanna has to adjust to this secret life filled with scandals and money.

I picked this up for free from the amazon kindle store, get yours here.

I was looking through my infinite list of books on my kindle when I came across this sitting in my library. I was feeling pretty bad that day (I think I had a stomach bug) and needed something from my normal genres to distract me. The title seemed silly and girly, so I opened it up and began reading.

The way this was written felt very juvenile. The author has a tone of a young woman and it felt like this may be her debut novel. The language wasn't always consistent as it would shift from how you would normally hear teens talk to words you'd find in City of Bones. I think that for this particular series the writing style fits, though. Kihanna is immature and I feel the writing is going along with how the character acts. I'm looking forward.

I wasn't too sure where the plot went with this one. I liked the idea of a mindless read, but before I knew it I had finished it and was staring at my kindle in a W-T-F state of mind. The plot was obviously thought out at one point and I feel that maybe it was a rough outline and then the author decided to spice it up. The book never really dragged on for me, it just seemed like something was missing. But after that end... HECK YES.

I did suspect the 'twist' with her mother, solely because of the phone calls and how she acted skittish. I also found it strange that such a caring mother (hey, teachers have to have a lot of heart to deal with what they see in the classroom)  would send her daughter off with a practical stranger. Unless maybe the have always stayed in contact...

OMG no way they could vacation the way they did with a teacher's salary! WHAT IF THEY SECRETLY MET UP AND HE HAS BEEN PAYING FOR IT THE ENTIRE TIME? And he'd been paying for her treatments?? So they mutually agreed she needed something new... wow.

Instead of making my way down the list as I usually do, I decided I'd just do a little summary of my thoughts.

~ I enjoyed all of the character in different ways. While I wanted to jump through the screen and punch a few (maybe break a nose *wink wink*) of them, I think they all have really secret pasts and I want to get into them. There has to be more to them then what was stated. Maybe they all hate each other because they got into something really bad? I don't know. I want more scandal!

I enjoyed this book. It was fast paced and got my distracted from my churning stomach. The end really through me through a loop, map props to the author. I usually see weird things happening a mile away, but I was surprised. Excited to see what's next!