Log in with Facebook
or
Wrong email address or username
Sign up
Already on BookLikes? Log in!
Incorrect verification code
Please, check your email, the code to access your BookLikes blog was sent to you already.
Enter code:
« Back Send
back to top
Search tags: monroe 
Temptation by heart is a Max Monroe specialty. If laughter truly is the best medicine, Winning Hollywood's Goodest Girl has more than enough to go around. Like a warm hug waiting to comfort, Raquel and Harrison take you out of your problems and welcome you into theirs. The harder they pull, the deeper you fall. We all need a little sunshine in our world and Monroe makes sure that we get it. Monroe will have readers laughing through their tears . Billie and Luca are a shock to the heart. Taming Hollywood's Baddest Boy will heat up the senses with a sprinkle of humor, a splash of heart and a never-ending dose of temptation. She has an agenda. He wants a life. What happens when his past life intrudes on his present serenity? FIREWORKS!!! FUN. FUN. FUN. I never grow tired of reading Max Monroe. 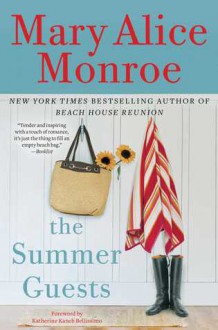 So if this book had just been a follow-up to the Beach House series it would have worked much better. Instead Monroe takes on horses in this one and a bunch of characters that either didn't make an impression on me, or ones that I ended up not caring for. My favorite parts of this book was a look into Cara Rutledge's life since the last book in the Beach House series. That said, I am still disappointed we didn't hear more about her brother, nephew, etc. in this one. Instead we hear about her, her daughter, and the new man she's been seeing since the last book "Beach House Reunion."

"The Summer Guests" follows a motley crew of people who live in Tyron, North Carolina who take in hurricane evacuees. The book follows Moira Phillips (who has rescue dogs), her two parents whose names escape me at the moment, Javier Angel de la Cruz (who is an equestrian rider and former/current Olympian) who is in a relationship with Hannah McLain (who is starting her own make-up line). And then there is Gerda Klug and her daughter Elise who are horse breeders. Mixed up in this is also Beach House favorite, Cara Rutledge. Cara, David, and some of the other Isle of Palms residents leave their homes to get away from a hurricane and end up staying with the Phillips at their horse farm. While there, secrets are revealed (dun dun dun dun dun).

The parts dealing with Cara and her adopted daughter and new love interest was great. We also get peeks at Heather and hew now husband. Even though parts of the book feels samey (remember the first book in the series dealt with a hurricane as well) this feels a bit different since Cara now feels firmly rooted and doesn't want her home to be destroyed. I think if Monroe had kept the book focused on Cara and changes in her life that would have worked best. Instead the book jumps around to other characters and we are given the time/date and estimated landfall of the hurricane it feels like every few pages.

The other characters were a wash for me. I was interested in the character of Hannah and felt annoyed by how her story-line turned out. I disliked Javier and Gerda intensely. Why this got marketed as a romance is baffling.

The writing in this book was all over the place for me. It felt like three stories forced fit into one. The parts dealing with Cara and her fear of the hurricane and the damage it could potentially do to her mother's old cottage, now her home, was palpable. I also loved the scene of her and her boyfriend David in the eye of the hurricane.

Other than that the rest of the book wasn't great. I don't like romance reads where there is cheating and I felt turned off by most of the other story-lines due to that.

The flow wasn't great either. It just felt like an actual physical change kept happening to my brain every time we leap back from Cara's story to the other characters in this book.

Not too much to say about the setting. I can still picture the fabled Beach House in my head, but everything else was kind of blah to me.

The ending was a mess. It was a great resolution for Cara, but everyone else, that was a hard no. I don't even know what to say about it except it read as unfinished to me. 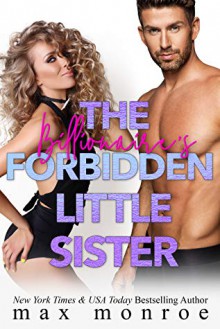 Max Monroe takes addictive reading to new heights. Lena and Theo flirt their way into your heart. The Billionaire's Forbidden Little Sister may put a strain on the bro code, but the chemistry between each and every character puts it at the top of my 2019 MUST HAVE list. Former friends become new enemies. Love becomes a high priority and humor becomes a must. Monroe continues to tickle the funny bone as she puts the move on your heart. 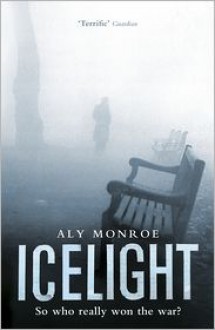