Log in with Facebook
or
Wrong email address or username
Sign up
Already on BookLikes? Log in!
Incorrect verification code
Please, check your email, the code to access your BookLikes blog was sent to you already.
Enter code:
« Back Send
back to top
Search tags: wishtree 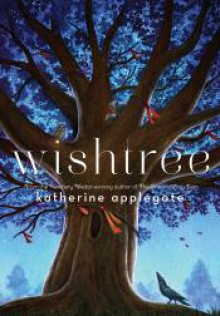 Wishtree by Katherine Applegate is about Red. A tree, but not just any tree. Red is a Wishtree.

This story wasn't what I thought it was going to be, but I found it to be imaginative and creative. I loved the characters, and the writing was simple but enticing. A great story of the differences of people around us and the feelings these differences can evoke. I feel all children should read this book.

'Wishtree' is the story of Red, an Oak tree who has served as the Wishtree for her neighborhood for many years. A wishtree is a tradition where people may write a wish on a cloth once a year and hang it on the branches of a tree in the hopes that it will come true.

Red has never actively participated in the granting of a wish before, but she is touched when a young girl, recently moved into the neighborhood, wishes for friendship. Red witnesses how the young girl faces prejudice and indifference on the street and, when threatened with being taken down as a nuisance, Red decides to take action while she can.

This story could easily have been saccharine drivel, but Applegate's writing delivers the sentiment without making it too cloying. At its heart 'Wishtree' is a novel about compassion and acting on our better instincts and refusing to let the bad behavior of some dictate the future for everyone.

I listened to the audio for this. No real thoughts to be honest. It reminds me a lot of The Giving Tree. An interesting concept but not my favorite book.