Log in with Facebook
or
Wrong email address or username
Sign up
Already on BookLikes? Log in!
Incorrect verification code
Please, check your email, the code to access your BookLikes blog was sent to you already.
Enter code:
« Back Send
back to top
Search tags: Cara-Black The premise of this story was good, and I tend to like historical fiction, but this book just didn’t grab me. Full disclosure, I stopped reading about halfway through. It wasn’t interesting enough to make me keep reading.

SPOILER ALERT: Though this review will be brief, the reasons I stopped reading do contain spoilers.

Kate wasn’t a very interesting character. All I knew about her in the first half of the book was that she lost her husband and daughter and could shoot really well. Apart from that she displayed no other personality at all. The German detective who is hunting her down after her failed mission was the same. I have no idea who he is and he showed not a single glimmer of a personality.

The story also told me all the good parts by about page 70, when we have a chapter between Kate’s handler and some of the other spies when he basically just says that they expected her to fail and it was her mission to fail. The Fuhrer will be too busy trying to catch her after the botched assassination attempt to not see the real assassination attempt happening. Yawn. So I am supposed to sit though 230 more pages of Kate trying not to get caught when the only reason she was sent there is to get caught? Wait, I think I know how this ends…she uncovers the nefarious plot to throw her under the Gestapo bus and miraculously escapes.

Speaking of getting caught, in the portion that I read, Kate should have gotten caught at least three times. She gets stopped by German soldiers on three separate occasions (when they know they are looking for someone in the vicinity who shot at their leader) but no one searches her bag? They search her. They look under the bag. One of them even remarks on the heaviness of the bag….which contains the rifle she used to attempt the assassination. But no one actually looks IN THE BAG. No wonder the Third Reich was defeated, they had a bunch of morons working for them.

I just couldn’t get into the story. It annoyed me more than it interested me. I had no desire to keep reading and so, I didn’t.

As someone with a special fondness for Second World War adventure stories, I came to "THREE HOURS IN PARIS" with a lot of high expectations. Indeed, it was about 2 years ago, when I went to see Cara Black speak at a local bookstore about one of her Aimée Leduc novels, she had mentioned to the audience that she was at work on a novel that would be taking place in Paris during the Second World War. That was enough to pique my interest.

So, I began reading "THREE HOURS IN PARIS" eagerly anticipating reading a novel that would enthrall me from start to finish. Well, it wasn't quite like that. I was 35 pages into the novel feeling underwhelmed by what I had read. In fact, what I was reading struck me as shoddy and amateurish, something a reader would expect to find from a first-time novelist, not a practiced and celebrated writer. There is a scene in which one of the main characters in the novel, Kate Rees, is working near a military installation at Hoy in the Orkney Islands (near Scotland) when the installation comes under attack by the German Luftwaffe (air force). Two sentences that helped to describe the ensuing action immediately stood out before my eyes as someone who is a longtime aviation enthusiast. The first sentence is "A propeller plane droned out of the clouds, followed by a second, then a third one." What is THAT supposed to mean? I didn't find that to be a particularly descriptive sentence that would have made the action more compelling and real to me. What kind of aircraft is a propeller plane?! Frankly, that was an awkward sentence and should have been re-worked.

And as for the second sentence, that rankled me because it makes absolutely no sense at all! Well, as a way of proving my point, I'll also include the preceding sentence: "The Luftwaffe were taking another pass now that the clouds had cleared. Only two this time, their swastikas glinting on the fuselage." SWASTIKAS GLINTING ON THE FUSELAGE?! As someone who has read about and studied Second World War aviation since I was a preteen, I know for a fact that Luftwaffe planes bore the swastika on the tail unit, NOT THE FUSELAGE. (The fuselage is the main body of an airplane, distinct from the wings and the tail unit.)   Clearly, the author failed to take account of that fact.

Kate, feeling bereaved and bereft after losing her husband and baby daughter during the first year of the war, accepts the offer made by a mysterious and officious gentleman --- who had been made aware of her prowess as a sharpshooter --- to come to London and join the ranks of Section D in British intelligence (i.e., the Secret Intelligence Service or SIS = MI-6).

The time is mid-June 1940. Paris has been declared an 'open city' and the Germans have marched in and occupied it. The British Expeditionary Force (BEF), along with a few scattered French army units, has managed to escape to Britain from the French port of Dunkirk. France is on the brink of total defeat. Kate is hastily trained to undertake a special mission to Paris, where her skills as a sharpshooter would prove to be valuable. She is parachuted into France on the night of June 22, 1940 (which is also the day that France has signed an armistice with Nazi Germany), landing in a non-descript area a short distance from Paris.

From the point Kate arrives in Paris, the pace in the novel quickens. The drama becomes compelling and that is what saved the novel for me. Yet, "THREE HOURS IN PARIS" is not in the class of a Frederick Forsyth, Alan Furst or a John le Carré espionage/action thriller. If Cara Black decides to write another Second World War novel set in France, I hope she will craft a tighter story and show greater care in conveying some historical details.
Like Reblog Comment
show activity (+) The used bookstore I frequent (at which I have almost $200 in credit) is a treasure trove of books. It's also a muddle - I realized the last time I was there that the shelves are actually 2 deep in books, and there really isn't any way to know what's behind the first line of books without digging. Therefore, it is like a treasure hunt every time I am there.

The last time I was there, I found a little section of Soho Crime, which had several of the Aimee LeDuc mysteries. I've read the first two of the series, but they are fairly expensive on kindle, so I'm reluctant to buy them. I could probably check them out of the library. Anyway, I figured out which of the available books was earliest in the series and bought it. This still meant that I would be skipping 5 books, since Rue Paradis is #8 in the series. I figured what the heck, and bought it anyway. When I saw that one of the qualifying book elements for International Day of Tolerance was to read a book set in Paris, I immediately thought of Aimee.

The action for this book is set in 1995, which is in the near past. I was not at all current on Aimee's private life, so her reporter boyfriend, Yves, was new to me. I have no idea how much of a role he plays in the earlier books before becoming the murder victim in this one. The murder itself was interesting, and I definitely didn't figure it out.

I really love the use of Paris in these books, though. It is such a vibrant, diverse, real city as portrayed by Cara Black. She definitely shows the duality of Paris - the romantic, glittery aspects, but also the dirty, urban elements as well. I doubt that they will ever make it into my first tier of mysteries, but I've enjoyed every one that I've read. Erin over at Flashlight Commentary is the one that came up with the cover crush idea and I loved it so much that I decided that every Thursday would I post a cover that I really love. Because let's face it, we all choose books because of the cover. It's the cover that makes us stop and take out a book from its shelf, turn the book around and read the blurb. Without a good looking cover it's a big chance a potential reader will walk away from a book.

This week's Cover Crush is the gorgeous cover for Murder on the Quai by Cara Black! Oh là là, that's one fine looking cover with the Eiffel tower really catching your eyes! I have this book as an ARC, but I do wish I had this in hardcover instead. It's just not the same thing with an ebook and especially not an ARC... 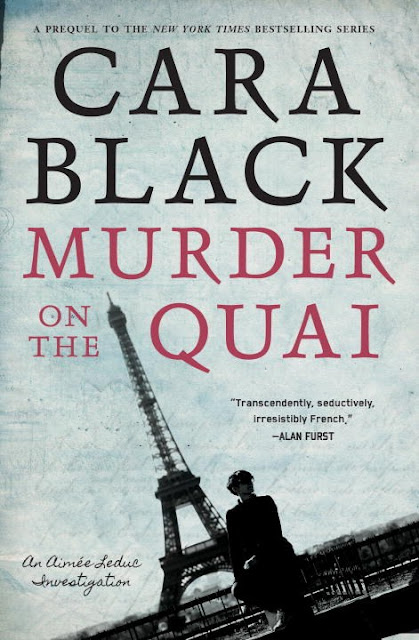