Log in with Facebook
or
Wrong email address or username
Sign up
Already on BookLikes? Log in!
Incorrect verification code
Please, check your email, the code to access your BookLikes blog was sent to you already.
Enter code:
« Back Send
back to top
Search tags: Historical-fiction

Metaphysics of Sound: In Search of The Name of God

or A Brief History of the world Beyond the Usual

Join Nataša Pantović, Maltese and Serbian researcher of ancient world’s, on a mind-boggling tour of history and sounds - from the Ancient Sumerian Priestess Sin Liturgy right up to the development of Ancient Greek and Cyrillic alphabet. This new novel contains a dialogue between two European cultures, Roman and Greek from an Ancient Slavic perspective, an intimate encounter of Balkan, its history and culture, a glimpse into the evolution of Ancient Egyptian’s, Ancient Maltese, Ancient Greek - Ionic and Slavic sounds. A Brief History of the world Beyond the Usual (the subtitle of the book) contains the historical overview of the development of people, sounds and symbols as frequencies. In the story, Ivana Šeravac was about to turn 30 when she found herself on a train journey to a Montenegro’s monastery Ostrog. Ivana’s travel companion, we are told, is David Archer who happens to be in Montenegro on a research trip related to his Phd work in London. “In search of the Name of God” we follow Nataša’s life-long research into the oldest recorded history of Europe, the 21 symbols of Ancient Serbian Vinča’s pottery, the 1st ever published Sumerian Liturgy for the Moon Goddess SiN by a Sumerian Priestess, Ancient Greek Herodotus and his encounter of Slavs, the Orphic Rituals with its Text of Derveni Papyrus from Macedonia, and the spread of the Dio-Nysus cult in the European Balkan. 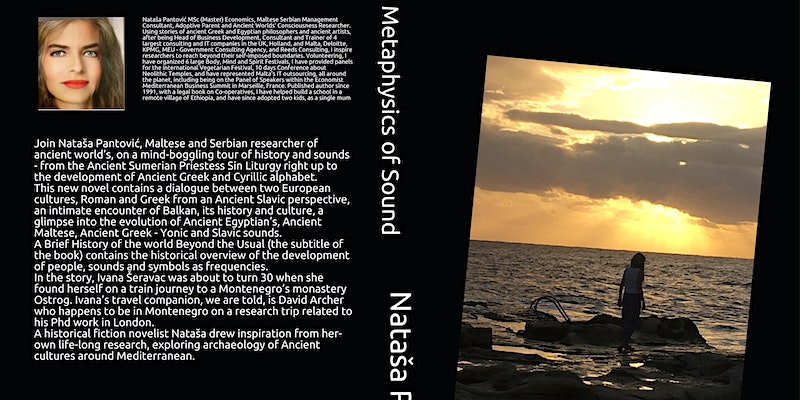