Log in with Facebook
or
Wrong email address or username
Sign up
Already on BookLikes? Log in!
Incorrect verification code
Please, check your email, the code to access your BookLikes blog was sent to you already.
Enter code:
« Back Send
back to top
Search tags: Clare-Mackintosh 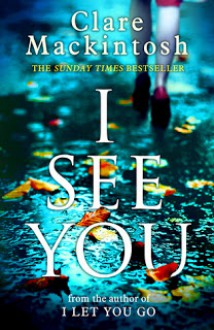 Honestly this book was dancing towards 5 stars before we got to the two reveals/twists and I went seriously? They are not explained very well so I just didn't think they fit the book at that point.

"I See You" follows two women (Zoey Walker and Kelly Swift) and an unknown narrator. When Zoey sees a picture of herself in the local paper along with an add to a dating site she wonders what is going on. When Zoey realizes that a few days earlier she recognizes the woman in the ad she calls Kelly (a PC working in London). The two women start to wonder what is going on with women having their pictures put in ads and what it may have to do with some recent attacks of women. The unknown narrator gives us insight into what is going on and why.

Zoey is a single mother two two children and lives with them and her partner, Simon. Zoey we quickly find out divorced her husband almost a decade earlier after finding out he cheated on her. She meets Simon around a year or two later and then he moves in with them. It seems her daughter Katie gets along with Simon, but her son Justin does not. Zoey at times I found hysterical and fairly exhausting. She is rightfully stressed but her character flips over minor things and also seems to be a helicopter parent excusing her son's issues while trying to force her daughter to get a 'real career." When Zoey starts her own investigation into things, she starts to wonder if someone close to her is behind the ad.

Kelly is a PC who we find out was demoted after an incident with a suspect. I actually liked Kelly's development here. We find out that an incident involving her twin sister has haunted her and Kelly definitely steps over the line throughout this case as well. I liked that she had a mentor and supervisor telling her she doesn't get to tell victims how they need to be/act. Kelly was being judgmental about a lot of things and it was interesting to read how she slowly starts to realize that she can't push people to do things just because that is what she would do.

The unknown narrator sounds like a psychopath. When we get to who this really is though I went really and moved on.

The other characters in this book are developed as well and I think Mackintosh did a good job with setting them up into the main story-line.

The writing was interesting and I liked the details on how something like this could be possible. The flow worked too I thought.

As I said earlier, the book pretty much slid down once we get to the reveal. It didn't make any real sense at all. Then we get a twist ending and I went, seriously? It left me with more questions than answers and I was left feeling dissatisfied.

Disappointed with the reveal and twist ending. Everything til then was going great. Solid four stars. 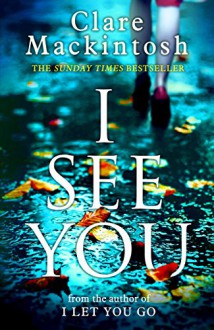 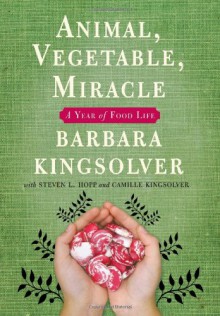 Hope that everyone is going into Memorial Day weekend (US BL) with a pile of books at the ready.

It's pouring cats and dogs here and it looks like it will do so through the weekend. I plan on socially distancing throughout the rest of this month and June no matter that states are re-opening.

Friday Reads are these two books:

Really intriguing thriller. Enjoying this one a lot. 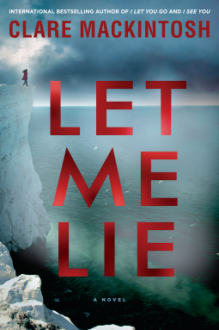 Since I had to get this back to the library this week, I moved this up and am wrapping up my "Watchers" read as well. I have to say that I could not put this book down last night! It was insanely good and the twists I didn't see coming well expertly done. I also like how Mackintosh plays with POVs via some of the narrative choices she chose. I thought this worked from beginning to end and I have to go back and read some more of her thriller/suspense novels.

"Let Me Lie" follows 20 something year old Anna Johnson. Anna is a new mother in a new relationship mourning the loss of her parents (Tom and Caroline Johnson) the year before. Both her father and mother committed suicide and Anna has always thought that someone has murdered them. When she gets a post in the mail that alludes to something sinister happening she goes to the police hoping they will re-investigate her parents' suicide. From there "Let Me Lie" follows not only Anna's POV, but someone close to her (no spoilers) and a retired police detective who finds himself intrigued about Anna's parents' case.

So I really liked Anna and felt for her. She had a great upbringing with her mother and father and feels a bit adrift after having her daughter. Once she receives the anonymous post in the mail about her parents she starts going back over her family's history and meeting with her father's brother and wondering if she ever really knew her parents. When her long-time family friend Laura trying to help Anna let go of the past, she starts to wonder if she's just looking for a reason behind her parents suicides or if there really was something more sinister going on.

I thought that Anna's boyfriend Mark was kept underdeveloped on purpose. You have Anna constantly protesting the relationship internally and saying  how it works, but even at times you have her popping her head up and wondering about them being together no matter how many times she protests to her uncle and Laura.

The retired detective Murray Mackenzie's POV was welcomed in this one. I felt so much sympathy for this character. Mackintosh shows how relentless he is in order to figure out the truth and how much inner pain he is due to the constant episodes with his wife Sarah that have caused her to be voluntary committed to a psychiatric hospital.

The writing was really good and the flow works. Mackintosh ensures the chapter headings show us when Anna and Murray are "speaking." And then we get another POV and then a fourth POV that I just shivered in delight with once things get revealed. I went back and re-read those knowing what I know now and just went "ah so clever." I loved the fact that Mackintosh takes a hard look at people's memories of an event and flips it around so many times in this one.

The setting of the book focuses mostly on Anna's family home and how hard she is trying to hang onto it. You get why Mark wants to move since I felt a lot of times that once again Anna was seeing the house in the past (happy families) and Mark was seeing it as it was (place where two people who killed themselves lived and dark aura around everything).

The ending was fantastic! Loved it from beginning to end.