Log in with Facebook
or
Wrong email address or username
Sign up
Already on BookLikes? Log in!
Incorrect verification code
Please, check your email, the code to access your BookLikes blog was sent to you already.
Enter code:
« Back Send
back to top
Search tags: David-Bowie

When Prince died on April 21, 2016, just four months after the passing of David Bowie on January 10, there were immediate and numerous comparisons made between the two giants of music in terms of importance and influence. I well recall one TV commentator certain Prince was the more influential of the two.

I can’t figure out that reasoning at all. For one matter, by the time of Prince’s first successes in 1979, Bowie had already made a decade-long cultural impact difficult to match. As some of the interviewees in Dylan Jones oral history of the life of David Bowie opined, Ziggy Stardust was where the ‘60s ended and the ‘70s began. A large number of British acts from U2 to Duran Duran acknowledge Bowie as an important influence. Not to mention acts like Mott the Hoople, Iggy Pop,  Lulu, and Lu Reed who all benefited from Bowie’s career-saving hand. Later, Madonna and Lady Gaga also pointed to Bowie as a seminal influence on their careers. And all this before Prince set foot into a recording studio.

And, judging from the countless verbal snapshots in Dylan Jones oral history, Bowie’s impact on the many people who knew or simply met him was profound on many levels.    For one matter, he was a figure with a deep well of interest from music to the visual arts to theatre and film to fashion to literature.  Because of his shifting guises throughout his career, he worked with a wide range of collaborators, producers, musicians, and business advisors. Depending on your point of view, Bowie was simply following his vision or was callous in his leaving some of his associates behind as he changed directions throughout his career.

While painting a “warts and all” portrait of Bowie in the words of hundreds of personal interviews, Dylan Jones presents a more than rounded portrait of an artistic giant worthy of the many accolades Bowie received before and after his death, but certainly he was no saint.  In his personal life, he enjoyed a wide range of sexual experiences. Many of them, by 2018 standards, could be considered child molestation. During the ‘70s, Bowie did a bit too much coke. And during the ‘80s, his artistic vision let him down when he crafted some admittedly substandard albums.

But, in the main, most commentators on Bowie in Dylan Jones’ biography remember Bowie in a very favorable light, from his private personal life to his work in the studio to his interactions with, well, seemingly everyone he ever met. From start to finish, Bowie is seen as an innovative artist with drive, talent, a special physical presence as well as intellectual abilities and curiosity. It’s such a personal book that those looking for insights into Bowie’s creative process may feel slighted, but there are no shortage of other books that explore such aspects of Bowie’s output.

I’ve always shied away from using the term “definitive” for any biography as many are comprehensive but usually lack in one aspect or another. Dylan Jones A Life comes close as he actually wrote very little but instead compiled a year-by-year history of Bowie and his circles using the voices of so many observers. It might not be the one and only book you should read about Bowie, but I can’t imagine any other tome out there that touches so many bases. Maybe not definitive, but certainly indispensable.

This review first appeared at BookPleasures.com on Aug. 20, 2018: Addition to my first post about one of my teenage idols and legends of our generation leaving this world behind. (I just found the Daily Cartoon of the New Yorker and enjoy it immensely - most of all for the respect they pay while picking the world apart.)

This interesting list was part of an article published in the Los Angeles Times.  I thought it would be worthwhile to share it. 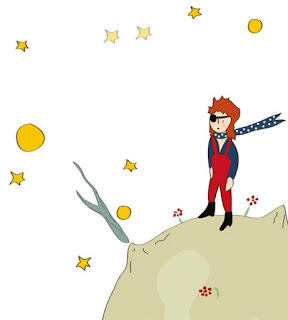 The list, which is featured on Bowie's official website, is preceded by text noting that several people suggested "a Bowie Book Club to tackle each of the 100 volumes."
It would be a fitting tribute to the legendary singer — just as fitting as illustrator Jen Lewis' sweet, and now heartbreaking, drawing of Bowie as the title character from Antoine de Saint-Exupéry's "The Little Prince."
From Bowie's Facebook page, his complete list of 100 books:
"Interviews With Francis Bacon" by David Sylvester
"Billy Liar" by Keith Waterhouse
"Room at the Top" by John Braine
"On Having No Head" by Douglass Harding
"Kafka was the Rage" by Anatole Broyard
"A Clockwork Orange" by Anthony Burgess
"City of Night" by John Rechy
"The Brief Wondrous Life of Oscar Wao" by Junot Diaz
"Madame Bovary" by Gustave Flaubert
"The Iliad" by Homer
"As I Lay Dying" by William Faulkner
"Tadanori Yokoo" by Tadanori Yokoo
"Berlin Alexanderplatz" by Alfred Döblin
"Inside the Whale and Other Essays" by George Orwell
"Mr. Norris Changes Trains" by Christopher Isherwood
"Halls Dictionary of Subjects and Symbols in Art" by James A. Hall
"David Bomberg" by Richard Cork
"Blast" by Wyndham Lewis
"Passing" by Nella Larson
"Beyond The Brillo Box" by Arthur C. Danto
"The Origin of Consciousness in the Breakdown of the Bicameral Mind" by Julian Jaynes "In Bluebeard’s Castle" by George Steiner
"Hawksmoor" by Peter Ackroyd
"The Divided Self" by R. D. Laing
"The Stranger" by Albert Camus
"Infants of the Spring" by Wallace Thurman
"The Quest for Christa T" by Christa Wolf
"The Songlines" by Bruce Chatwin "
Nights at the Circus" by Angela Carter
"The Master and Margarita" by Mikhail Bulgakov
"The Prime of Miss Jean Brodie" by Muriel Spark
"Lolita" by Vladimir Nabokov
"Herzog" by Saul Bellow
"Puckoon" by Spike Milligan
"Black Boy" by Richard Wright
"The Great Gatsby" by F. Scott Fitzgerald
"The Sailor Who Fell From Grace With the Sea" by Yukio Mishima
"Darkness at Noon" by Arthur Koestler
"The Waste Land" by T.S. Elliot
"McTeague" by Frank Norris
"Money" by Martin Amis
"The Outsider" by Colin Wilson
"Strange People" by Frank Edwards
"English Journey" by J.B. Priestley
"A Confederacy of Dunces" by John Kennedy Toole
"The Day of the Locust" by Nathanael West
"1984" by George Orwell
"The Life and Times of Little Richard" by Charles White
"Awopbopaloobop Alopbamboom: The Golden Age of Rock" by Nik Cohn
"Mystery Train" by Greil Marcus
"Beano" (comic, ’50s)
"Raw" (comic, ’80s)
"White Noise" by Don DeLillo
"Sweet Soul Music: Rhythm and Blues and the Southern Dream of Freedom" by Peter Guralnick
"Silence: Lectures and Writing" by John Cage
"Writers at Work: The Paris Review Interviews" edited by Malcolm Cowley
"The Sound of the City: The Rise of Rock and Roll" by Charlie Gillete
"Octobriana And The Russian Underground" by Peter Sadecky
"The Street" by Ann Petry
"Wonder Boys" by Michael Chabon
"Last Exit To Brooklyn" By Hubert Selby Jr.
"A People’s History of the United States" by Howard Zinn
"The Age of American Unreason" by Susan Jacoby
"Metropolitan Life" by Fran Lebowitz "The Coast of Utopia" by Tom Stoppard "The Bridge" by Hart Crane
"All the Emperor’s Horses" by David Kidd
"Fingersmith" by Sarah Waters
"Earthly Powers" by Anthony Burgess
"The 42nd Parallel" by John Dos Passos
"Tales of Beatnik Glory" by Ed Saunders
"The Bird Artist" by Howard Norman
"Nowhere To Run: The Story Of Soul Music" by Gerri Hirshey
"Before The Deluge" by Otto Friedrich
"Sexual Personae: Art And Decadence From Nefertiti To Emily Dickinson" by Camille Paglia
"The American Way Of Death" by Jessica Mitford
"In Cold Blood" by Truman Capote
"Lady Chatterly’s Lover" by D.H. Lawrence
"Teenage" by Jon Savage
"Vile Bodies" by Evelyn Waugh
"The Hidden Persuaders" by Vance Packard
"The Fire Next Time" by James Baldwin
"Viz" (comic, early ’80s)
"Private Eye" (satirical magazine, ’60s – ’80s)
"Selected Poems by Frank O’Hara
"The Trial Of Henry Kissinger" by Christopher Hitchens
"Flaubert’s Parrot" by Julian Barnes
"Maldoror" by Comte de Lautréamont
"On the Road" by Jack Kerouac
"Mr. Wilson’s Cabinet of Wonders" by Lawrence Weschler
"Zanoni" by Edward Bulwer-Lytton
"Transcendental Magic, Its Doctine and Ritual" by Eliphas Lévi
"The Gnostic Gospels" by Elaine Pagels
"The Leopard" by Giusseppe Di Lampedusa
"Inferno" by Dante Alighieri
"A Grave For A Dolphin" by Alberto Denti di Pirajno
"The Insult" by Rupert Thomson
"In Between The Sheets" by Ian McEwan
"A People’s Tragedy" by Orlando Figes
"Journey Into The Whirlwind" by Eugenia Ginzburg
david bowie book faves found it interesting
Like Reblog Comment
show activity (+)

And there you have it. The kindle version of this is on sale in the US at least, for 1.99.