Log in with Facebook
or
Wrong email address or username
Sign up
Already on BookLikes? Log in!
Incorrect verification code
Please, check your email, the code to access your BookLikes blog was sent to you already.
Enter code:
« Back Send
back to top
Search tags: Douglas-Adams 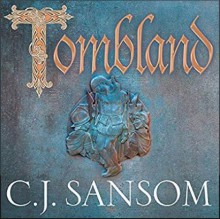 Today is a roll day for me:  It started with doubles that sent me to another square I've visited before (and for a moment had me fearing I'm stuck in a loop, too): I move to square 26: How? -- Read a book that is science fiction or a book with the word "how" in the title.

This is an excellent excuse to listen to the Stephen Fry audio of Douglas Adams's Hitchhiker's Guide to the Galaxy that I recently acquired.

My next roll -- since the first one were doubles -- also landed me on a question mark square, but this time one I haven't visited before: square 34: When? -- Read a book that is time travel or historical fiction, or a book with the word "when" in the title.

I think the BL-opoly gods are telling me to finally get a move on and read C.J. Sansom's most recent Shardlake book, Tombland, which at this point has been sitting on my shelves for way too long.  So, Tombland it is! This was my favourite book in the series - clever and hilarious, of course, but also fascinating on philosophical and scientific levels. Parallel universes and infinite Earths - well there were at the start of the novel anyway. One thing I did notice after five books, however, is the lack of character arcs. Less happens in this, the fourth book of the Hitchhiker's trilogy, than in the preceding three, but it is funny and clever in true Adams' style. The story includes a new Earth and a love interest for Arthur Dent (one that sends them soaring into the clouds). Three bowls gifted by the missing dolphins, an inside-out house in California, the co-ordinates to God's final message, a grumpy rain god and angels in Scholl sandals provide the requisite whimsy and allow the reader it indulge in a much needed escape from reality. It's silly and fun (as you'd expect) but perhaps not quite at the level of other Adams novels. Suspense and conflict are absent, replaced by convenient coincidences that allow Arthur to sail gently through the story. I visited Douglas Adams' grave at Highgate and partook in the tradition of leaving a pen. I'm not sure why that's done by so many. Were Adams' pens always running out of ink? I would have left a towel, but I didn't have one with me.

Call me an idiot (I've been called worse) but until recently I didn't know there were four books in Hitchhiker's Guide to the Galaxy. I remember chortling on bus journeys while reading this first two, so I recently picked up books three and four to find out whether I would be equally enamoured.
I've just finished book three - "Life, the universe and everything" and plenty of chortling occurred.
Arthur Dent and Ford Prefect are tasked with saving the Galaxy from a bunch of "really sweet" xenophobes who are obsessed with killing everything that isn't Krikkit. But it's the puns and wordplay that really make Adams' books great. The plot is secondary or tertiary and frequently forgotten or side-lined.
Hitch-Hiker's Guide to the Galaxy is the perfect series of books to read when life starts to feel too serious and you start channelling Marvin the Robot. Book four next.
humour
Like Reblog Comment
show activity (+) As with Princess Bride I'm phenomenally late to the Douglas Adams party, but in spite of my dislike for science fiction (and, to be fair, space-related science fact, for that matter), my resistance was been worn down and I thought I had half a chance of enjoying it on audio.  When I saw an edition narrated by Stephen Fry, I figured my chances increased to at least 3:2.

I still don't like science fiction - If I'd been reading this book, I'd have DNF'd it at Zaphod Beeblebrox, and never even gotten to Slartibartfast.  The combination of space and names I can't pronounce would have spelled its doom.  Also, as much as I ultimately enjoyed Adams' humor, the space stuff still bored me.

The opening description of Zaphod Beeblebrox was almost the second death knell for this book; the author's description of him, in the scene right before he absconds with the Heart of Gold, was so unerringly and disturbingly similar to another alien life form currently squatting in an oval office somewhere in the US, that I almost couldn't go on.  Fortunately Zaphod Beeblebrox soon shows signs of intelligence and self-reflection that made it obvious he was a vastly higher being.

Stephen Fry is amazing.  Anyone who doesn't think a narrator can make a book better has never listened to Stephen Fry.  The book stands on its own merits, but I'd not have finished it without his voice bringing it to life.  I know this  because I'd originally started a different edition and I couldn't get past Ford and Arthur's first inadvertent hitchhiking experience.

Funniest moment for me:  the "spoiler alert" Adams gives out before the Heart of Gold lands on the mythical planet (of course I can't remember its name, it's some complex science fiction word).  That made me laugh out loud.

Overall, the story started slowly for me and I honestly couldn't figure out what all the fuss was about.  Once they they landed on the mythical planet, things got more interesting, and I was just really getting into the story when, of course, it ended.  Now I have to hope and pray Stephen Fry narrated an audio version of The Restaurant at the End of the Universe.

I'm keeping this in my pocket for possible use in the Snakes and Ladder game.