Log in with Facebook
or
Wrong email address or username
Sign up
Already on BookLikes? Log in!
Incorrect verification code
Please, check your email, the code to access your BookLikes blog was sent to you already.
Enter code:
« Back Send
back to top
Search tags: Maggie-Shayne 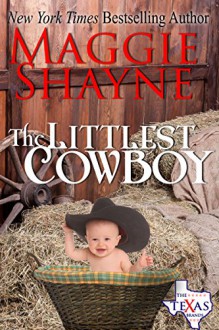 by Maggie Shayne
Book 1 of The Texas Brands

Rating:  No Rating
Progress:  7% into book

Baby on his Doorstep!  Sheriff Garrett Brand has raised his entire brood of siblings single-handedly, and he’s done his best to teach them some values, to mold them into honorable, responsible, and trustworthy human beings.  So when a baby lands on the doorstep of the Texas Brand, his first question is which younger brother is in for a butt-kicking?  But the little fellow isn't named after Ben, or Wes, or Adam, or Elliot.  The little feller is named after him – Garrett Ethan Brand–according to the note his mama left behind.

He’s still racking his brain to figure it all out, when a woman shows up at the ranch in the dead of night, spitting, fighting mad, and accusing Garrett of murdering her sister and stealing the baby!

Chelsea is confused, heartbroken, and too mad to think straight, and the same trouble that found her poor sister is right on her tail.  But of all the places she and the baby could've wound up, Garrett thinks this ranch is the best one.

Because this is one family that knows how to pull together and trouble doesn't stand a chance against The Brands of Texas.

I had a bad feeling about this book after reading the first chapter.  On a whim, I started skimming the rest of the book and found that I probably wouldn't like what came next.  From the short snippets I read here and there, we've got a bunch of cavemen-like alphas, and one irrational TSTL heroine.  There's also a lot of telling instead of showing.

To be fair, to her, however, at some point in the book, the men all decide together that they need not tell the womenfolk just HOW dangerous this very dangerous man truly is.  They don't need to know.  No need to worry the fragile hearts of the little ladies, right?

There's entirely too much testosterone going on in this book for me.  Since when is NOT telling someone how much danger she (or even he) is in a good idea?  Ever?

I've read a lot of crap books lately.  I'm too tired to put up with another one.

I loved Maggie Shayne's Brown and de Luca series and have been hoping for another great from her.  But I suppose sometimes you just cut your losses where you can.  This is an earlier Maggie Shayne work, though, so maybe I should stick with her newer stuff.

I picked this book as one of my Reading Assignment Challenge books, and just as well, it was a Kindle freebie.  So I'm glad I got this book out of the way.

Moving on to something else now! 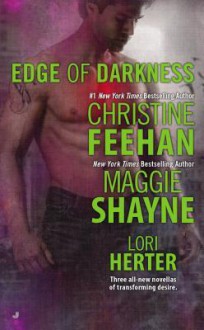 This book is 390 pages long and 216 of them are the Christine Feehan story.  I realise that there are a lot of deep Feehan fans but I find the stories disturbing, full of consent issues and undermining of strong women. I admit that I read many books where consent and agency are problematic but Feehan seems to push many of my buttons and make me quite cranky.

Some authors pull you past issues and allow you to keep reading but I just can't with Feehan, my internal editor rears her head and spends the entire story pointing at things that irritate rather than going with the story.  She often creates characters that I like initially and then they fall in love and seem to be undermined and turn from strong to weak and stop being the people I liked.  Which is probably most of what I dislike about Laurel K Hamilton. There's also an amount of "this is what women are really like" subtext that rubs me up the wrong way.

Blaze is about to take on the men who killed her father and rings the number on a card to tell the person on the other side what's about to go down and instead he comes to her to try to persuade her to live, and that she's his mate and then he fails in woo and adulting. Sorry, I tried, it just annoyed me so much every time they talked.

Dead by Twilight by Maggie Shayne starts with some minor slut shaming and then continues into a detective novel with a vampire who has found ways of hiding in the police force and using her night-time skills well and who realises that there is a place and maybe a partner.  I found this a much better story with a lot more agency for everyone.

Cimarron Spirit by Lori Herter did show some inexperience but as a story of an old vampire and an archaeologist trying to choose between safe and dangerous men.  It was a good glimpse of possible better stories.

Well Christine left me with a lot of bad taste in my mouth but Maggie and Lori made up for it. Apart from the minor slut-shaming at the beginning of the story the Maggie Shayne was much better than the Feehan story,  Lori Herter's story was good but showed some beginner issues.

Must expand on this tomorrow, right now I need to go home.

I have issues with a lot of paranormal romance, it's compulsion and fated relationships. They both often lack an element of consent.  If there's nothing that all the crap that has come out recently that makes this an element we can no longer ignore.

Non-consensual sex is rape, no exceptions, no arguments, no more excuses.

Some authors do a good job of the fated mates issue but often it removes the ability of the woman (more often than not) to actually consent and I'm really tired of it, it needs to stop, the excuses for rape need to be stopped, they need not to be part of our background noise.  Yes, intellectually we know that this isn't right but the repeated telling of tales that erode that knowledge makes people start to questions the validity of their beliefs. Many of us try to let life flow smoothly around us and disagreeing with what appears to be the majority makes us question our stances.

I can't keep doing this to myself, I have to stop the guilt of finishing reading books where the relationship is making me uncomfortable and where honestly I keep wanting the heroine (and occasionally hero - yes, I'm looking at you Laurel K Hamilton) to dump the MF already.

And why do most vampires behave like spoilt children, surely centuries of life (or even decades) make them have to adult on a regular basis?

Why yes, I have problems with the first story by Christine Feehan, I've had problems with her Carpathian series before where it appears (from the two I struggled through) that she hasn't met a competent female character she couldn't undermine with a relationship and sex.