Log in with Facebook
or
Wrong email address or username
Sign up
Already on BookLikes? Log in!
Incorrect verification code
Please, check your email, the code to access your BookLikes blog was sent to you already.
Enter code:
« Back Send
back to top
Search tags: Matilda (This is not the edition I read, I read the Little Black Classics edition, but it is hard enough already to find the books currently on BookLikes)

Frankenstein is one of the books that has been on my TBR the longest, but this week's Little Black Classic was a less well known work by Mary Shelley which was not published until long after her death.

One thing that is clear from Matilda, is that Mary Shelley can write well. Unfortunately, the story did not really work for me. Matilda looks back at her - miserable - life on her deathbed, which basically bottles down to her being miserable for all her life but for a few passing moments.

Still, not a lot happens and it mainly her feeling dreadful. Maybe it was not the right book for me at the moment, but I did not like it much nor did I care about Matilda or any of the other characters in the story. Family secrets. Forbidden love. And the true price of wealth.

The story begins with a dinner party invitation… When young journalist Thomas Cleary is sent to dig up quotes for the obituary of a legendary film producer, the man's eccentric daughter offers him access to the exclusive upper echelons of Hollywood society. As Thomas enters a world of private jets and sprawling mansions, his life and career take off beyond his wildest dreams.
Then he meets Matilda Duplaine.
Beautiful and mysterious, Matilda has spent her entire life within the walls of her powerful father's Bel-Air estate. Thomas is entranced, and the two begin a secret love affair. But the more he learns about the mysterious woman's identity, the more he realizes that privilege always comes with a price.
Amazon.com

Thomas Cleary, a young Midwestern man with a Harvard degree under his belt, is now working as a journalist for the Los Angeles Times, after losing his job (amidst scandal) at the Wall Street Journal. Thomas' boss assigns him the task of writing the obituary piece for recently passed legendary Hollywood producer Joel Goldman. After becoming acquainted with his daughter, Lily, she invites him to a party expected to have a roster full of entertainment industry heavy-hitters. Though he's working on a tight deadline, Thomas calls in to his boss to tell him of the offer. Without hesitation, his boss tells him to most definitely accept... and take mental notes for future stories!

The world of Lily Goldman was full of presents, and I couldn't help but wonder if there were strings attached to every last one of them.

At this party, Thomas meets studio executive David Duplaine, considered to be one of the most powerful men in the world, in general. Everyone finds Thomas' quiet, polite demeanor charming and refreshing in a town full of brown-nosing. Within a month of this party, Thomas is drowning in invites to parties and lunches all over town. Attending as many as he can manage, he's flattered and curious at all the sudden attention, but his journalist nose also begins to suspect and sniff out the secrets under the glittery facade of this world. At one such party, actress Carol Patridge gives him some advice, quietly disguising a warning:

"Be careful. I know all this can be very intoxicating, but everything has its price, Thomas. You'll get charged without knowing it, and you won't know the price until the bill comes in the mail."

"Are you saying I can't afford it?"

"I make twenty million a picture and I can't afford it."

Fate deals a hand on the day Thomas sets out to attend a party being hosted by David Duplaine. Upon arrival, Thomas is surprised to find no one on the property... or so he thinks. Climbing a tree to have a look around, he spots a young woman on David's tennis court. To Thomas' knowledge, David was living the life of a confirmed bachelor workaholic with no children... so who is this? It's not hard to guess, as by this point in the book the reader is nearly 100 pages in and the title character has yet to be introduced to Thomas. Yep, he's just had an unexpected run-in with the mysterious Matilda Duplaine.

Thomas is instantly charmed by her, but he must know the whole story --- Why is she not allowed to leave the Duplaine estate? Why does everything involving Matilda have to be arranged in such a clandestine fashion?What's this great misfortune she hints will befall them if they continue to see each other? Later on in the story, I was confused as to why Matilda runs so hot & cold with Thomas after he risks everything to try to get her her freedom. She does make an attempt to explain, but I don't know if I buy what basically amounts to "please excuse my daddy issues." 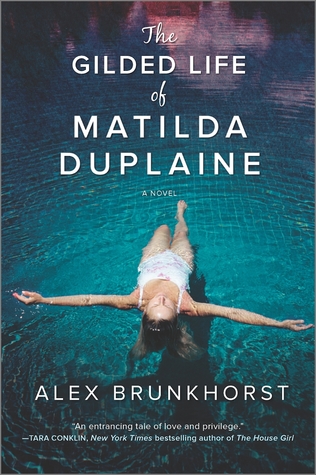 Though the story is set in modern times, there is still a noticeable Old Hollywood vibe to the whole thing. Touches of Great Gatsby inspo here and there (the feel / era, not necessarily the plot). The detail in the world building is rich to the point of the reader having no trouble imagining these antique-heavy mansions that Thomas finds himself rotating through. You can virtually feel the furniture, smell the luxury cigarettes, hear the clink of barware.... that aspect made sense once I saw that Brunkhorst's author bio mentions her day job as being a real estate agent specializing in multi-million dollar estates. She clearly knows this world!

There's also a brief interlude of sorts where a few of the characters temporarily move the setting to Hawaii.

The characters were all unique --- there was something about Lily I just loved, wanted to know more of the story there --- and the relationships between them made for fun reading, I'd just wish there was more oompf or tension to the mystery of the Duplaine backstory.

Matilda, is a must read book for all children. I would use this book with higher grades, 3rd-5th. This book is about a little girl who must put up with her crazy family and evil principal, and uses her powers of telekinesis to protect herself and those she loves. I think students would really enjoy reading this book. I would use this book in my classroom to have students practice reading comprehension by having whole group/ or small group discussions of the story. (Book Reading Level: Lexile 840L)

Roald Dahl’s Matilda will always hold a special place in my heart. It is a clever read for upper grades (and even adults!) about a little girl with a passion for knowledge so big, one could even say it is magical. It is on the 3rd grade shared reading level, and 5th for independent, according to Scholastic. There are also many creative writing and character building activities one could pull from it.