Log in with Facebook
or
Wrong email address or username
Sign up
Already on BookLikes? Log in!
Incorrect verification code
Please, check your email, the code to access your BookLikes blog was sent to you already.
Enter code:
« Back Send
back to top
Search tags: Second-Chances What were the odds these three would end up assigned to the same freshman-dorm suite at Minerva College on the Connecticut coast? Because yank out one thread from the fabric of human destiny, and everything unravels. Though it could also be said that things have a tendency to unravel regardless.

Whatever the odds were, three very different freshman from very different backgrounds did end up assigned to the same dorm suite and ended up working in the kitchen together. It's the kind of friendship created by shared living space, shared experience and intense emotions (college in general, and the Vietnam Draft they watched on TV together). They became the Three Musketeers—in spirit and in name to those who knew them—and then they left Minerva College and started their lives. Then, yes, things unraveled.

It's now forty-four years later and they reunite at Lincoln's Martha's Vineyard home for one last hurrah before Lincoln sells the family home. The three of them spent plenty of time there in college, and what better way to prepare to sell? But there's a shadow over their reunion (and not just the fact that they're all showing their age in different ways).

As with Dumas' trio, there was a fourth—like them, yet not. Her name was Jacy. All three men were in love with her, but in a true one for all fashion, they didn't try to see if there was any chance for a relationship with any of them. On the last weekend they spent in this house, a few weeks after graduation, Jacy left early one morning and was never seen again. All three—Lincoln, Teddy, and Mickey—are haunted by memories of that weekend as they assemble.

Each man responds to these memories differently, Teddy indulges in self-introspection, Mickey drinks a lot and spends a good deal of time planning for the trio to catch some live music. Lincoln starts looking for an explanation—and ends up talking to a retired police officer who remembered the case, tries to build a case against a neighbor, and generally stirs up trouble asking questions.

This sounds like the setup of a Crime Novel, doesn't it? I've read so many book blurbs that this sounds like that I started expecting this to be Russo's take on Crime Fiction. While we do learn what happened to Jacy and why; the book is about so much more. It's about friendship, fleeting youth, the expectations of others, aging, and love—probably a few other things, too.

"How about a cup of coffee?"

"Doesn’t mean you can’t have another."

"With me it does, actually." In fact, it was distinctly possible the near-constant state of gastric distress Lincoln suffered these days was a symptom of an as-yet-undetected ulcer traceable to the 2008 financial meltdown. On the other hand, it might be nothing more than acid reflux, which came with the territory of getting old. His wife, being a woman, wanted clarity on this issue, whereas Lincoln himself, not being one, was content to dwell in uncertainty a while longer.

I don't think I even really looked at the blurb for this, I just knew it was a new Richard Russo novel that didn't feature Sully. That was enough for me to put it on reserve at the library weeks ago, so I could be one of the (possibly the) first to get my hands on it. As no two of his books are really the same kind of thing, it made for a pleasant surprise that way.

I don't know that I was captivated from the get-go, but these three (and poor Jacy) grew on me, each had a story that was familiar, yet felt fresh. These were complicated me with complicated feelings—well, you're never sure about Mickey, he seems pretty straightforward. We spend most of the novel seeing things (past and present) from Lincoln and Teddy's perspectives—which helps us see everything going on with them, and primes us to pay close attention when it shifts for Mickey's perspective.

I'm ignoring most of my notes now because I think I've really said everything I needed to say. Russo's about as close as you can get to a sure thing in writing today and he brings that skill to these pages and these characters. Chances Are . . . is not something I'll look forward to rereading like Straight Man, or as powerful as Empire Falls or as moving as Bridge of Sighs, but more interesting—and with more staying power—than That Old Cape Magic or anything published before Straight Man (not that any of those were bad, they just don't appeal to me the way his latter works do). Still, there's an ineffable quality to this work that will make me keep thinking about it—the power of friendship, lost love, how our youth controls our futures, and what really anchors us to this world.

I liked the story, I liked the characters, Russo can't write a bad anything—there's a lot to commend this book, and little to discourage a potential reader. Russo's one of the best America has to offer right now, and this is further evidence of that. I've just stumbled across a ray of sunshine and it's name is Dylann Crush. Sweet Tea & Second Chances is a smile in waiting. Robbie and Cassie stumble into a legend and run off with your heart. Ms. Crush takes a funny, yet insightful approach to romance that will put a little love in any heart. ONE CLICK ROMANCE FAVORITE!! 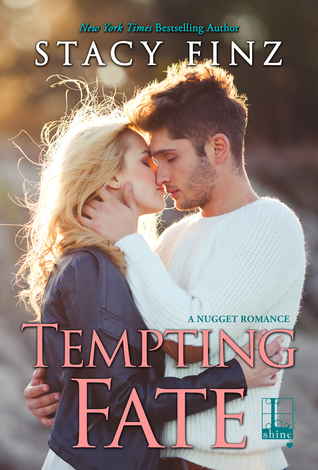 Nugget #10, I don't know if I ever said it in one of my reviews but I know I thought that I wouldn't care if Raylene ever got her own HEA, but I'm glad she did. She's the person everyone loves to hate and she finally meets someone who sees behind all the shine and snootiness and saw the head strong determined woman who regrets everything she did to the town she once loved; especially hurting the two people who loved her the most and now she's lost everything. She can't forgive herself because the town won't forgive her. I think this is one of those books that is best when you've read the other books in the series, but Raylene does have some flashbacks of her worst moments that fill in the blanks, or you can read Getting Lucky and Falling Hard those are the two with her story in them.

Gabe Moretti runs a business with Raylene's half brother, Logan. Logan asks Gabe to keep an eye on Raylene since she's not the most loved person in Nugget he wants to make sure she stay out of trouble and had back-up if she needs it. Gabe has heard the rumors about Raylene and it's not hard for him to believe it all but he finds it hard that the people from a the town that so far has been welcome and inviting can hate someone so much. Raylene has two things she wants to accomplish after Logan and Annie's wedding before she can finally move on from Nugget and never look back, find the gold her ancestor buried and sell off the last remaining plot of her family's land. After she finds her gold and sells off the land she can give the women's shelter she's been volunteering at the money they need to stay open and finally have enough start up money to start her own horse training ranch. But she has to find the gold first and Gabe insists on helping. Little things keep happening that raises suspicion that Raylene isn't the only ones out there looking for the gold.

Overall, this was a really good read. It was emotional not only between Raylene and Gabe but between her and the town she did some pretty low and horrible things and you can tell how much she regrets do them it really showed how much Raylene had changed since the beginning. The end was very exciting. I was surprised by how quickly the whole town flipped on their feelings for Raylene but hate isn't the opposite of love and they all loved her once they just needed something to love her for that was enough to forgive her of her past sins. Taking Chances is a set of three novellas, all dealing with love where you have to take a chance. All three of these stories are only quick snippets as they are novellas. I do think (and it could have already happened!) that all three could go onto to be a fully fledged novel, rather than a novella.

The stories are all heart-warming in their own way, although there is angst and suspense within each one. The characters are well-rounded, and have their own foibles. There isn't much world-building involved as they are all contemporary, but that just means the focus can be on the characters rather than the scenery.

I enjoyed each story and would definitely read more by this author. Definitely recommended by me.

Welcome everyone on the official website of Prediction guru. As we all know that there are many candidates who play bet on cricket matches. So if you are interesting to join my group and want to join every match of Cricket then first you just need to click on the Match Astrology link.