Log in with Facebook
or
Wrong email address or username
Sign up
Already on BookLikes? Log in!
Incorrect verification code
Please, check your email, the code to access your BookLikes blog was sent to you already.
Enter code:
« Back Send
back to top
Search tags: Something-from-the-Nightside Okay, is it just me or is this a filler book? While it was full of the usual craziness that is a part of this series, I felt that the story hadn’t even kicked off when it ended!

Another issue I had with this instalment was with the main character’s love interest. She is an abuse survivor and the author is building their relationship gradually. The woman finds human contact difficult to bear, and John isn’t rushing her or pushing her in any way. I love that! But what I don’t like is that aside from this fact and that the woman is a badass — possibly insane too — we still don’t know much about her. Maybe develop her character a bit?

Nonetheless, books like these satisfy my craving for when I have recently given up on watching Supernatural for the 100th time. Or when I have finished the season of The Umbrella Academy — even after watching one episode a day to stretch it for as long as I could have — and can’t be bothered to find a new show to watch.

Originally published at midureads.wordpress.com on February 28, 2018. 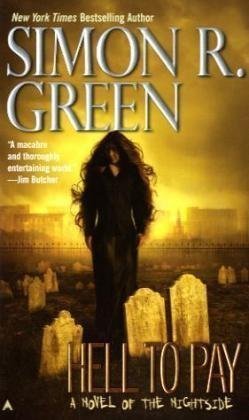 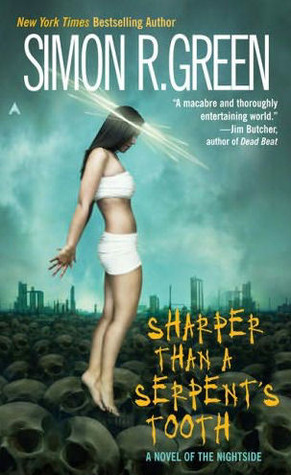 Here is what is wrong with this series — and not just with the two books in question:

1. John’s third eye and the powers that come from it are a huge deus ex machina plot device. I don’t think there is any way around it though since Hell to Pay is the 7th book in the series!

2. The prose is repetitive. Each place is the worst place on earth. It is always so bad that sane people avoid it like the plague.
The same is the case with all the villains that show up. Really bad and scary but John still manages to one-up them.
And then there are all the sexual fetishes. Nightside is all about gratification. We know that. But the descriptions of the less than civil proclivities of its denizens and tourists are becoming one big blur. For instance, the way all that naughtiness that happened in Hell to Pay was written made it seem like a rehash of a previous book — the one with the nightclub singer, Raven.

3. Time travel and the confusions/paradoxes associated with it.

4. Suzie Shotgun. I dunno what to make of her. The way John tells it, she would sell her own mother if it served her purpose. So what is it that attracts him to her? Why does she stay with him?

5. The previous books were all preparing us for the big event. The showdown between John and his otherworldly parent — well one of them — Lilith. She was ultimate world-ending bad news. I’ll even buy that he managed to defeat her and save the world. Now what? Everything seems paler in comparison now that Lilith was taken care of. It seems like the author intended for the series to end after the 6th book but couldn’t make it stick.

6. Which villain will the next few books be setting us up for? Oh right, the devil. Doesn’t seem too original though, does it?

7. The mysterious people who controlled Nightside were exposed to be ordinary obscenely rich men with inflated egos and no clue about the kind of bad news that Lilith could prove to be. How is that even possible?

8. And now that they are gone, Walker just takes over and easily replaces them. Not buying it, dude!

Why do I keep reading you ask? Because of the humor! It is funny as heck and the saving grace in face of all the problems I have with the series. Will I be reading the next book? Yes, I will! At this point, it is no surprise to anyone that I am a fantasy fan, specifically urban fantasy. I like magic, monsters, adventures, etc. I also like revisiting characters and worlds, which means I'm definitely a series guy. I like a good standalone, mind you, but they are rarely as immersive as a long-running series.These are a few of my faves, and why. I am excluding the ones I discovered last year, as I've already discussed them elsewhere.

One of my all-time favorites, this series follows Harry Dresden, a professional wizard based in Chicago. It starts out as basically a PI series with magic, but dives much deeper into the lore starting with book 3, Grave Peril. Fast, funny, and exciting, this is the big daddy of modern UF, hitting #1 on the NY Times list a few times. There are 15 books in the series thus far, plus various shorts, novellas, and comics.

First book: Something From The Nightside (2003), completed

and prophesied heir to the Nightside, as he solves crimes, learns about his birthright, and challenges the Powers That Be. The writing can be a bit repetitive, and there are a couple lesser books among the twelve (thirteen including a collection, which is fun but inessential), but some of the characters are just flat awesome, especially Walker and "Shotgun" Suzie Shooter. Can get a bit gruesome, but the humor is always spot on.

A very funny combination of demonology and theoretical physics, intended for YA readers. A great trilogy about a young boy whose town is frequently treatened with demonic takeover. I'm not usually a YA guy, but this just flat rocks.

Another fun UF series, this one told, thus far, from exclusively female perspectives. There are many people in the world born with strange abilities and, in the UK, it is up to the Checquy to handle them. Very funny, often gory, and occasionally thought-provoking. As the second book, Stiletto, mostly abandons the lead from the first book in favor of two new characters, it will be interesting to see what happens in book 3.

Confession time: I've only read six or so of these books and feel no pressig need to complete the series. I will read more of them, and happily, but am in npo rush, nor do I feel any need to read them in any particular order. There are about forty books in various subseries, plus various addenda, and, while there is continuity, flitting around has worked fine for me thus far.

An epic fantasy in the traditional vein, with great characters, beautiful writing, and interesting magic systems. This series follows Kvothe first as a student, then on various adventures. Stories within stories, an unreliable narrator, a school story, this is as interesting structurally as narratively. Am desperately anxious for book three.

Both the worst-written and most structurally ambitious of all these series. this deals with mere mortals who, in various ways, become incarnations of various concepts, such as Death, Time, War, etc. Originally intended as a quintet, then extended to eight books. I never bothered with the last three books because the first five tell a complete story. Said story is not told sequentially, as the books take place at around the same times. Instead, we get the same occurrences from different perspectives, slowly deepening context, and a growing sense of the underlying conflict. The writing isn't particularly strong, but the ambition is laudable. I am a big short fiction reader, and have always been. I love being able to hop in, geta full experience, and move on in a single sitting. Or take a long, hot bath and read an entire novella. That kind of thing.

These are all single author collections, as opposed to multi-author anthologies. I prefer collections, in general, because, while they may vary wildly in terms of content and quality, they tend to be more cohesive, less jarring. Not to say there aren't some amazing anthos (this is what foreshadowing looks like)...

You'll also notice that these are mostly horror. I feel horror is often best at shorter lengths, giving short, sharp shocks before disbelief can set in. Novellas please me because you have just enough space to flesh out a few characters and give your story depth, but not enough to wander too far off  course.

My first Ellison, recommended by Stephen King in Danse Macabre. Contains some of his best, weirdest works, but any Ellison is worth picking up. Still, this has a story about a nice Jewish boy whose dead mom is still trying to run his life. For his own good, of course. How can you resist?

Four novellas, all amazing. Yes, my favorite is "Rita Hayworth and the Shawshank Redemption," but"The Breathing Method" is a close second. I love club stories, and this is one of King's rare forays into that sub-genre.

This is, to my  mind, King's most consistent collection. All of the others have at least one dud. Not this one. There's a reason three of these four tales have been made into great movies.

Another one highly recommended by King (he wrote the intro), and another that introduced me to one of my favorite authors. One  of the masters of "quiet horror," Grant wasn't much one for gore, preferring to imply some truly terrifying things. Dark and disturbing, with a few weird turns here and there.

I love almost everything I've read of Gaiman's, but this is my favorite of his collections. Not much more to say about it, really, it's just great.

Read this last year, and loved it. Everything from literary fantasy to Ligotti-esque horror to true-life hauntings, all in one beautifully written package. Still need to read more Connolly.

All of the Silver John stories in one place. One of my favorite series characters, John is an itinerant balladeer who confronts various bizarre happenings during his wanderings through Appalachia. There's nothing quite like this out there.

If this only had the title story and "Pop Art," it would still make the list, but there's so much more, too. Those two are sweet and sad, but the rest gets pretty damn dark while still keeping a bit of wonder. Read this book instead of listened, like I have with the previous 2 books, didn't like it as much in text form though It was a quick, easy read.
Looking forward to the next one!!