Log in with Facebook
or
Wrong email address or username
Sign up
Already on BookLikes? Log in!
Incorrect verification code
Please, check your email, the code to access your BookLikes blog was sent to you already.
Enter code:
« Back Send
back to top
Search tags: Starship-Troopers 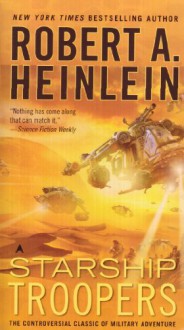 Word of warning. I’m going to discourse both on the book and on the Verhoeven’s movie.
He didn't include them as "grunts" probably because the training was sufficiently hard that most wouldn't have made it. If you read the description of the training it wasn't just 12 weeks square-bashing, it reads far more like Special Forces.
It might also have been because he was paying lip service to a society kind of modelled on 50s America where the ladies were the home-makers and females in the frontline weren't even on the radar.
However, having said that, we have the fabulous line about females in high rank and esteem:
"If the Almighty ever needs a hand to run the universe: hot ship pilot Yvette Deladrier" after Starship commander Deladrier brakes her ship's orbit to recover a lander that has blasted off late and which otherwise would miss rendezvous and all on board would perish. I’ve heard from a lot of my friends saying the movie version is utter shit. I’m not so sure. The thing is, Verhoeven was a master of taking existing texts and subtly pushing them into satire by overdoing Hollywood/MTV filming tropes. The viewer was encouraged to look at the films as broad entertainment and then ask what the actions of the heroes had to do with American culture. He did the same with Joe Eszterhas's scripts for “Basic Instinct” and “Showgirls”. “Basic Instinct” is a detective story where the 'hero' is someone who's already gotten away with murder because of his badge, and who shoots another innocent victim before the film is out, while the 'villain' is never actually shown to kill anyone. She's chiefly a suspect because of her sexuality (which is why GLAAD picketed the film) and lack of shame about it. “Showgirls” meanwhile depicts a vision of Las Vegas as a patriarchal dystopia where every woman is judged on her body and literally every male character is a predator of some kind.
If you're into SF, read on.
sf Heinlein 2017 1996
Like Reblog Comment
show activity (+) 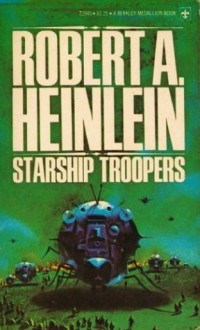 Sometimes it is really hard to drag up out of one's deep memory the names of all the books that I have read. Granted, I could list all of the Little Golden Books that I read as a child, but somehow I think that defeats the purpose of listing all the books that one has read on Booklikes (though I just entered Little Red Caboose into Goodreads to find that it has a rating of 4/5 with something like 439 listings), though since finding them sitting on my brother's bookshelf I have ended up doing just that (along with the Dr Suess Books and the Mr Men books). Anyway, this digression has little to nothing to do with Starship Troopers, with the exception of my long term memory kicking me in the backside and reminding me that I read this book a while ago.

I had seen the movie Starship Troopers prior to reading this book, and Starship Troopers is still one of my favourite, no-thinking, sci-fi action movies, but the book does have a little to do with the film (beyond the title that is). The book is about militarism when one's country is under attack. Earth is being bombarded with meteorites from another system that are being directed by a race of insects. This is not a story about two space powers slugging it out in space with star destroyers, but rather a race of insects who are able to launch their progeny through space and invade planets that way.

The enemy is clearly an unthinking race of creatures (they are not sentient, but still incredibly dangerous) that simply seeks to go out and destroy everything in their path. They are insects in the purest form possible. I have read a lot of books where the insects are sentient, but alien, creatures, however that is not the case here. These insects are what you would expect from insects, though most biologists would scoff at the fact that these giant insects are chitinous, particularly since insects this size would not be able to lift the shell. However this is science-fiction, and in a lot of cases, the laws of science get thrown out the window when dealing with this genre (and who knows, we might actually find a race of giant, chitinous, insects on a low gravity world).

Heinlein's military is harsh though. Some have suggested that it is nothing like the film, and I must admit that I agree having read this book (albeit a while ago). The one thing I noticed is that there are no support roles (such as cooks), the soldiers are responsible for everything. These days it is suggested that for every soldier out fighting you need at least two auxiliary personal to support them. Granted, the cook does not cook for just one person, but for a number, however when cooking for 50 men, the head cook will need a lot of other cooks to help him (or her as the case may be). However, in this army everybody fights, and everybody also does the chores that are required of them. This, to an extent, makes for a much more efficient (and cheaper) army.

The problem that I do have with this book is the fact that the movie keeps on getting in the way. The movie is not necessarily what one would expect of the movie though in that it does not follow a traditional plot. It is not until close to the end that we discover the purpose of the film, and the main character is not moving towards a specifically defined goal. However it does not mean that it is a bad book, because the book is more about how the character becomes a soldier, and you could say it is the same in the film. 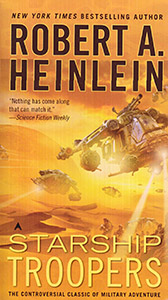 There’s a movie supposedly based on this book. The movie has the same title, but that’s where the similarities end.

The movie is an action adventure story about a bunch of very photogenic co-ed soldiers who land on a rocky world filled with giant bugs. They proceed to get regularly surrounded while trying to battle these creatures with archaic weapons and idiotic tactics that would have made General George Custer proud. The movie is asinine, but I still liked it because it had action, sex, and romance, and sometimes that’s all that’s necessary. Actually, most times. But I’m here to talk about the book.

The book is largely about philosophy and politics. It’s a narrative given by a rich kid named Johnny Rico who volunteers for the Mobile Infantry. The story focuses on the meaning this has for him, and the significance of soldiering in society, and the way this significance filters down to society’s smallest elements while acting as one of its key foundations.

There’s not much action and only a few real characters. Author Robert Heinlein has a lot to say, and he often uses Johnny’s training instructors as his mouthpiece. I don’t mean in a symbolic sense, but in a “soapbox” sense. They lecture Johnny (and the reader) quite a bit.

I’m not even sure why I liked this book, but I did. Maybe it was all the depth and thoughtfulness. I felt like I was immersed in a quality piece of writing. 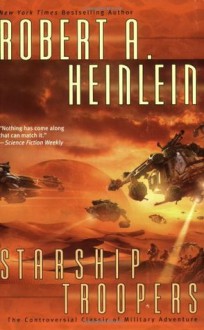 Great book but nothing like the movie. If you've seen the movie but not read the book, you owe to yourself to do so.
More posts
Your Dashboard view:
All Reviews Text Photo Quote Video URL Activities
Liked posts Top Tags
Press About Terms of Services Privacy Policy Contact Us Blog FAQ Patronaty medialne BookLikes for Authors Partners panel more...
Team Themes Docs API Blogs
Copyright © 2022 BookLikes