Log in with Facebook
or
Wrong email address or username
Sign up
Already on BookLikes? Log in!
Incorrect verification code
Please, check your email, the code to access your BookLikes blog was sent to you already.
Enter code:
« Back Send
back to top
Search tags: The-Madman\'s-Daughter-series 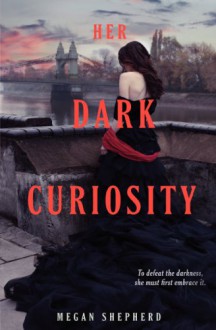 Her Dark Curiosity was the much anticipated sequel to The Madman’s Daughter. In the first book, we met the teenage Juliet Moreau, daughter of the infamous Dr. Moreau. I loved the first book and enjoyed that retelling of HG Wells’ classic The Island of Doctor Moreau.

In Her Dark Curiosity, Juliet has made it back to London. Much has happened since her voyage to the mysterious island. Juliet now resides with her guardian Professor Von Stein, one of her father’s former colleagues. (One wonders why she didn’t stay with him in the previous book, but I digress). Professor Von Stein’s niece Elizabeth is also staying with them, to provide a mother figure for Juliet.

The book begins with a series of murders. All the murders seem to be connected to Juliet in some way. Juliet quickly figures out who the murderer is and can’t believe that it is someone that she thought was long dead. And get this – the murderer is using the name Henry Jekyll – so you probably have an idea that this book is based on Robert Louis Stevenson’s The Strange Case of Dr. Jekyll and Mr. Hyde.

I enjoyed this retelling immensely, however there are a few points I must make. Juliet really doesn’t seem to have any sense of self-preservation, putting herself in some pretty dicey situations. Wherever and whenever trouble brews, Juliet seems to be there. Aside from that, I really did like Juliet and how hard she worked to find a cure for her ailment.

There’s a lot of interesting things going on in this book and the plot twists are fascinating. I loved Lucy and how she helped out with some of the sleuthing. And whoa, what an ending! I can’t wait for the next book

Thank you to Edelweiss and Balzer & Bray for a review copy of this book.

Review posted on Badass Book Reviews. Check it out!