Log in with Facebook
or
Wrong email address or username
Sign up
Already on BookLikes? Log in!
Incorrect verification code
Please, check your email, the code to access your BookLikes blog was sent to you already.
Enter code:
« Back Send
back to top
Search tags: The-Toast Very creative! There is only one drop of syrup left in the refrigerator and Lady Pancake and Sir French Toast are on a race to get it. Miss Brie just informed the leftover friends and now the two of them will be pushing, shoving, rolling, falling and hurdling over items to get that last drop. Watch out linguini, you tall bottles of salad dressings and all you beans, these two are not stopping until they reach that syrup bottle. Chili Lagoon, Broccoli Forest, Orange Juice Fountain may slow them down but these two will clean themselves off and hit the road again. Who will be the winner and was this race worth the fight?
I thought this novel was fun and creative. I could actually visualize the events occurring in the novel as the twosome battled through the refrigerator towards the syrup bottle. Once they arrived at their prize (syrup bottle), I liked how things were settled and how the book ended. The bonus map which flips down on the back page, so it is a vertical illustration of the inside of their refrigerator, was the icing on cake. What a fantastic novel. 5 stars
It's sequel:
The Case of the Stinky Stench
This is a cute sequel to Lady Pancake and Sir French Toast. I enjoyed the rhyming text as it kept the story moving forward as Lady Pancake and Sir French Toast help investigate the strange stench that is troubling the fridge. Interrupting their vacation, Sir French Toast's nephew Inspector Croissant informs the vacationers that something is causing a horrible smell that needs to be investigated and eliminated before everything is lost. Immediately they know who is behind the odor but when they find their suspect, they find out they were wrong. They try again with other clues and it is the determination of Inspector Croissant that helps solve this mystery and saves the fridge elimination.

It's a cute story with colorful and bright illustrations. I enjoyed the fun and quirky names of the items in the refrigerator (Mount Everbean, Onion Ring Cave, Miss Steak, Corn Chowder Lake, etc). It's a creative and imaginative children's book that's fun to read.  4 stars

A few weeks ago, I read a book called Dear Dragon which was about a pen pal relationship between a little boy and a dragon but they had no idea they were writing to someone of a different species. The illustrations were on point but it was the storyline that had me looking to see what else the author had written. (His name is Josh Funk by the way.) Turns out he had another book by the snazzy title of Lady Pancake and Sir French Toast (with a sequel called The Case of the Stinky Stench due out on May 2nd). This book has fantastic illustrations by Brendan Kearney which truly bring the fridge food to life. If you're reading aloud to pre-school age children, I highly encourage you to have the kids make predictions and point out their favorite (and least favorite) food items. Otherwise, this book might be a bit of a daunting read-aloud because there are quite a few challenging words (and lots of them) per each page. It follows our two main characters, Lady Pancake and Sir French Toast, on an epic quest to reach the last drop of syrup remaining in the syrup bottle. Lots of ridiculous rhyming, competitive taunting, and delicious food items abound. 9/10 for frolicking foodie fun.

Note: If you do decide to use this as a storytime read-aloud and/or you utilize this in a lesson I recommend you check out Josh's website which has a free downloadable activity kit to complement the book.

After reading Troy's post, I coaxed The Bear into doing the Tolkien Toast with me! Here we are: 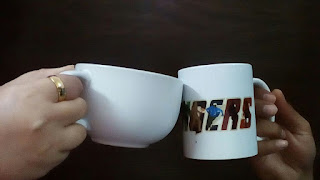 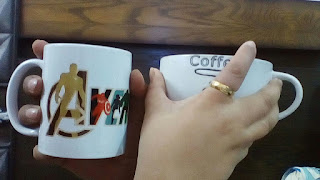 Colonial Spirits by Steven Grasse, illustrated superbly by Reverend Michael Alan and published last Sept 12th by Abrams, is not a book about the colonial men, souls, who made the USA. No. It's about the "spirits" that permitted at the Americans to create that country.
Won't you think that the USA would have been the same country without "spirits?"

Well, this book is not just a story of men but also and first of all of...alcohol.

This book is born as a beautiful, old-fashioned book, where History of alcoholic beverages must be the main protagonist. What the book wants to do is focus the past, and like all cook books I read by Abrams stunningly beauty because it's another historical trip in the USA and I love the history of the USA. This time History passes through the various alcoholic beverages created with the time in the USA.

The book begins with the arrival of the Pilgrims in the East Coast.

What meant the New World for the first pilgrims? To re-start from the beginning a new life, new food, new beverages. I don't want to say that they had to forget what they left behind, but surely this one a new complete different adventure where life needed to be re-invented.

Alcohol as well to be re-invented.

Americans once arrived in the new world "tried to make booze" from everything and sometimes with funny results, writes the author.
The author describes John Smith, his devotion for women and his love for Pocahontas.

But then the author asks: "Why puritans drunk?" Surprisingly they were scared by water, it seems.

Well, although it can appears strange, maybe there is a great truth in this ironical affirmation. (And you will smile a lot reading this book because Mr Steven Grasse is truly ironic!)

The old populations, Egyptians, Greeks, Romans left us an immense patrimony of knowledge. With the time this knowledge has known a great dispersion.

Romans loved water. Thermal baths were born with them and they truly loved good water. Well with the time all the rest of Europe, once disappeared this great Empire, unable to return at the hygienic conditions the Romans had dictated and created.

Water in Europe and in Britain not purified at all.
Water during 1600 was very dirty we can add. Who drunk water risked to start to fall sick with smallpox, dengue, yellow fever, influenza, sadness. So why to be sad when there was the possibility of drinking some alcohol? But what kind of alcohol?

Samuel Cole just arrived in 1630 from the Old World in the East Coast I guessed was missing his distant land so badly because decided to open in the social Boston the first tavern. This place became an active center where people loved to spend some time together for drinking, eating and also starting to talk of current events.

At the same time at Philadelphia some people opened a lot of taverns as well.

Beer can be created substantially with barley but also with any other kind of grain. At the moment we have wagons of ales available but surely 300 years ago the story appeared a bit different.

No one will discover the real taste of ales produced by the Americans of the 1600 but something is more than sure: everyone drunk beer. Including children.

Beer substantially was made at home.
Taverns later symbolized the populist atmosphere of that age. Mr Grasse says: "It was what we drunk as well as where drunk it."

You will find great recipes for beer.

Cider born thanks to apples and apples has been one of the most wonderful success of Americans. Apples trees started to be planted since 1623.
He is a real legend and wagons of books written about him: Johnny Appleseed spread love for apples in the USA.

Born John Chapman, on Sept 26 1774 in Massachusetts he spent most of his life loving animals, nature and trees traveling in many States like Pennsylvania, Ohio, Indiana, Illinois and wherever he went he planted apples trees. The author specifies that the story Johnny planted seeds was maybe not real. What he did was to plant a lot of orchards trees.
Many recipes, anecdotes, utilization of cider in the daily life.

Wine: this one per centuries a complete failure for the Americans. They tried with all themselves to produce good wine from 1500 but without great results. There is to say anyway that in recent time in particular in California Napa Valley there are great improvements. Maybe the USA not a land of wine, but sure it is a land of...spirits!

Rum and punch a great chapter apart that you will find very interesting. The first one associated at piracy as well, and in another chapter you will find a lot of informations in this sense.

Then it's the turn of Liqueurs, cordials, medicines and beverages and a final chapter dedicated at the various alcoholic beverages in the rest of the world.

What the author thinks is that without beer, without rum, without bourbon, without "spirits" not intended as ghosts but as introduction of some alcohol in the body and so with the materialization of a parallel intelligence once drunk, the USA now wouldn't exist as we are seeing it. If rock exists, if movies exists, if many industries exists, it's thanks to alcohol adds Grasse.
For sure beer and also other alcoholic beverages are able to bring people together and they permit a good socialization.

I can tell you something: this book is precious, old-fashioned, beautiful. It seems to open (I read my copy via Adobe) an old book. If you know someone who love History and also alcohol, good illustrations, and this friend will be passionate for experimenting some of the recipes of this book for creating a new kind of beer, punch etc, you will make a great figure for sure!

Don't lose the occasion to make happy someone you love!

The cover of the book is enchanting like all the rest of illustrations you will find inside.


I surely thank NetGalley and Abrams for this book! Mention Bourbon Springs and I am in the front row. Ms. Bramseth brings love, loss and liquor to the table with this dramatic series. Toast and Char (Book 8) is a story centered around regret, secrets and second chances. Miranda and Prent were young and in love until an act of desperation destroyed their chance at happiness. Will they succeed at regaining everything that was lost? Jennifer Bramseth is skilled in telling true to life stories with the dedication and emotion that easily captivates her readers. With this series she holds nothing back and that is what I find so appealing.
More posts
Your Dashboard view:
All Reviews Text Photo Quote Video URL Activities
Liked posts Top Tags
Press About Terms of Services Privacy Policy Contact Us Blog FAQ Patronaty medialne BookLikes for Authors Partners panel more...
Team Themes Docs API Blogs
Copyright © 2021 BookLikes