Log in with Facebook
or
Wrong email address or username
Sign up
Already on BookLikes? Log in!
Incorrect verification code
Please, check your email, the code to access your BookLikes blog was sent to you already.
Enter code:
« Back Send
back to top
Search tags: kate-bateman 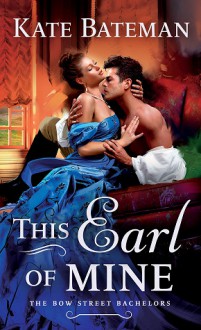 There were worse places to find a husband than Newgate Prison.

Georgiana is desperate to keep herself, her fortune, and her father's shipping company out of her cousin Josiah's hands. Deciding that marrying a condemned convict, quickly making her a widow and gaining more power over her finances, is the best way to do this, she ends up meeting Benedict Wylde in Newgate.

A Bow Street Runner undercover as a smuggler, Benedict allows himself to be taken prisoner so that he can try and get some information out of his cellmate. With an Earl older brother trying to save the family holdings because of a father who gambled away the family fortune, he's in constant need of money. An heiress demanding he marry her but also making him sign a contract saying he can't touch her money, in the bowels of Newgate, seems almost Faustian.

First in the Bow Street Bachelors series, This Earl of Mine did a great job of hitting all the, somewhat becoming overused Regency London sights, Vauxhall and balls, and giving some new blood details like a submarine. The heroine Georgiana inherited control of her father's shipping company but reader's don't really get to see her in the roll, she spouts off nautical knowledge but for the most part, it was left to the side. Our hero Benedict is a second son who joined the Rifles and fought Napoleon, again a detail added to his character that could have used some coloring in. The first half of these two meeting and testing each other was an enjoyable warming story to fall into but the middle dragged with lack of sparks and the ending brought the focus on a Napoleon plot that never felt entwined with the characters, giving the story a lack of emotion.

“What if we don’t keep our marriage quiet?”

I thought the details of our leads was interesting, Georgiana running the shipping company and trying to fend off her cousin and Benedict having fought for the Rifles, owning a gaming hell with his friends, and now a Bow Street Runner. While the details were there, the coloring in was absent. I thought the author did a great job giving us the setting but the characters fell flat for me. If you read a good amount of Regency historical romance, you won't find much new here (except for the submarine!) and the lack of emotion breathed into the story was disappointing. There were also some plot points that didn't quite tie together; there being no prisoners condemned to die on the night Georgiana shows up, why the prisoner guard would go to Georgiana's cousin Josiah, and even some of the marriage plot of reasons given to keep it a secret and then not keep it a secret.

I usually bemoan series baiting characters but I actually thought Benedict's two friends, who are also partners in their gaming hell, could have shown up more, would have liked to have scenes showcasing their friendship and even Georgiana and her family, her sister and mother ended up feeling like caricatures. There is still no denying that the author has a very readable flow to her writing and there were moments between Georgiana and Benedict that flashed but for the most part, this felt like a shell of a story. I'll be looking for plot points that meld together better and more emotion and feeling in the next installment.

This shrimp dish has Guinness in it! Hope it pairs well with this Bow Street Bachelor...

This Earl of Mine by Kate Bateman purchase link

The tomato taste overpowered for me but I did love the Guinness taste in there. 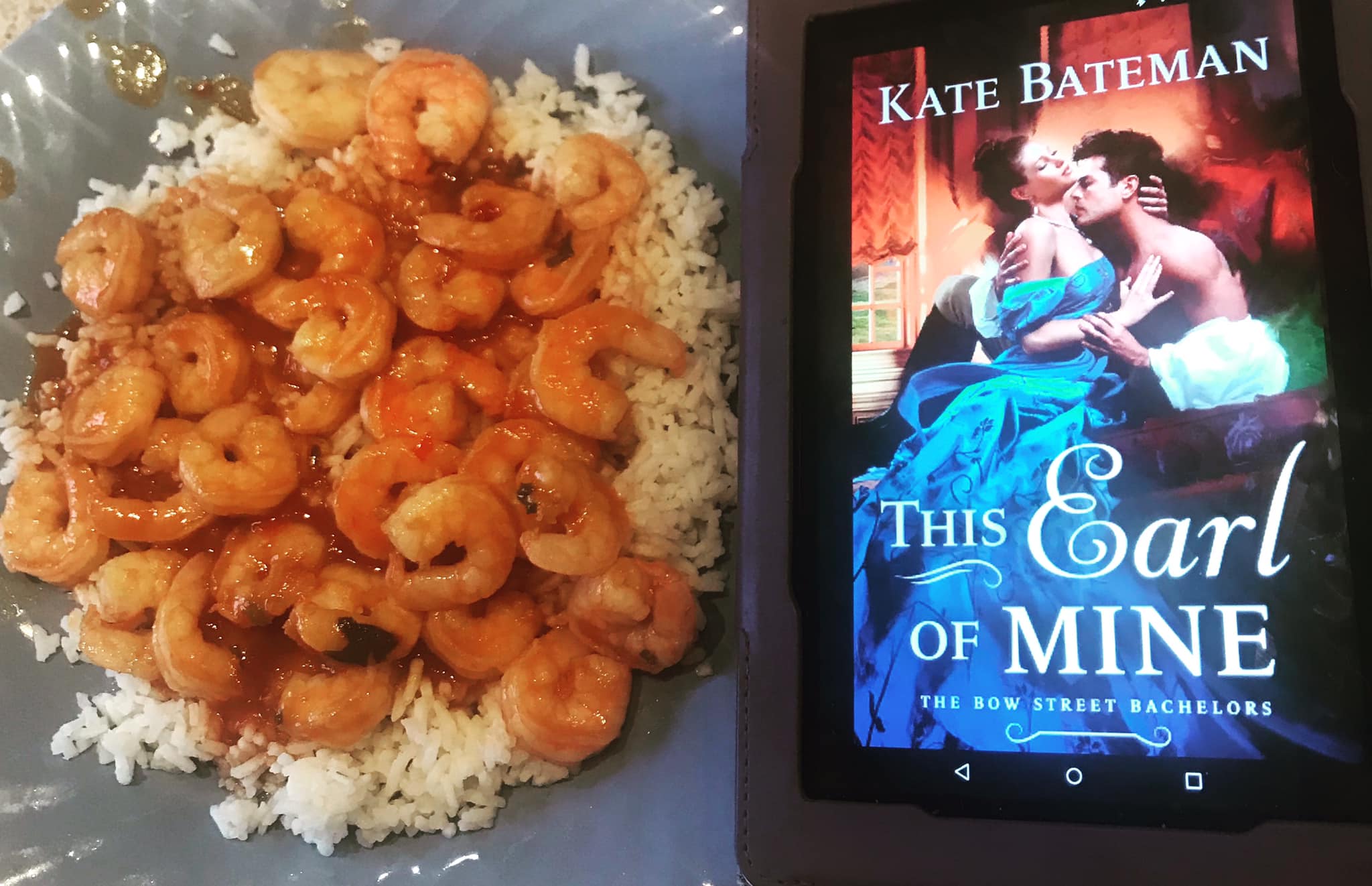 Shipping heiress Georgiana Caversteed is done with men who covet her purse more than her person. Even worse than the ton’s lecherous fortune hunters, however, is the cruel cousin determined to force Georgie into marriage. If only she could find a way to be . . . widowed? Georgie hatches a madcap scheme to wed a condemned criminal before he’s set to be executed. All she has to do is find an eligible bachelor in prison to marry her, and she’ll be free. What could possibly go wrong? Benedict William Henry Wylde, scapegrace second son of the late Earl of Morcott and well-known rake, is in Newgate prison undercover, working for Bow Street. Georgie doesn’t realize who he is when she marries him—and she most certainly never expects to bump into her very-much-alive, and very handsome, husband of convenience at a society gathering weeks later. Soon Wylde finds himself courting his own wife, hoping to win her heart since he already has her hand. But how can this seductive rogue convince brazen, beautiful Georgie that he wants to be together…until actual death do they part?

Going into this book, I really didn’t have any expectations. With historical romances (and any romances actually) there are only so many plots that can be used so it’s nice to find new authors who write books I really enjoy. I really liked both Georgie and Benedict. I loved following them on their adventure. There was actually a lot crammed into this book. I thoroughly enjoyed it and can’t wait for the next book. I highly recommend.

There were worse places to find a husband than Newgate Prison.

Of course there were.

It was just that, at present, Georgie couldn’t think of any.

“Georgiana Caversteed, this is a terrible idea.” Georgie frowned at her burly companion, Pieter Smit, as the nondescript carriage he’d summoned to convey them to London’s most notorious jail rocked to a halt on the cobbled street. The salt-weathered Dutchman always used her full name whenever he disapproved of some- thing she was doing. Which was often.

“Your father would turn in his watery grave if he knew what you were about.”

That was undoubtedly true. Until three days ago, en- listing a husband from amongst the ranks of London’s most dangerous criminals had not featured prominently on her list of life goals. But desperate times called for desperate measures. Or, in this case, for a desperate felon about to be hanged. A felon she would marry before the night was through.

Georgie peered out into the rain-drizzled street, then up, up the near-windowless walls. They rose into the mist, five stories high, a vast expanse of brickwork, bleak and unpromising. A church bell tolled somewhere in the darkness, a forlorn clang like a death knell. Her stomach knotted with a grim sense of foreboding.

Was she really going to go through with this? It had seemed a good plan, in the safety of Grosvenor Square. The perfect way to thwart Cousin Josiah once and for all. She stepped from the carriage, ducked her head against the rain, and followed Pieter under a vast arched gate. Her heart hammered at the audacity of what she planned. They’d taken the same route as condemned prisoners  on the way to Tyburn tree, only in reverse. West to east, from the rarefied social strata of Mayfair through gradually rougher and bleaker neighborhoods, Holborn and St. Giles, to this miserable place where the dregs of humanity had been incarcerated. Georgie felt as if she

were nearing her own execution.

She shook off the pervasive aura of doom and straightened her spine. This was her choice. However unpalatable the next few minutes might be, the alternative was far worse. Better a temporary marriage to a murderous, unwashed criminal than a lifetime of misery with Josiah. They crossed the deserted outer courtyard, and Georgie cleared her throat, trying not to inhale the foul-smelling air that seeped from the very pores of the building. “You have it all arranged? They are expecting us?”

Pieter nodded. “Aye. I’ve greased the wheels with yer blunt, my girl. The proctor and the ordinary are both bent as copper shillings. Used to having their palms greased, those two, the greedy bastards.”

Her father’s right-hand man had never minced words in front of her, and Georgie appreciated his bluntness. So few people in the ton ever said what they really meant. Pieter’s honesty was refreshing. He’d been her father’s man for twenty years before she’d even been born. A case of mumps had prevented him from accompanying William Caversteed on his last, fateful voyage, and Georgie had often thought that if Pieter had been with her father, maybe he’d still be alive. Little things like squalls, ship- wrecks, and attacks from Barbary pirates would be mere inconveniences to a man like Pieter Smit.

In the five years since Papa’s death, Pieter’s steadfast loyalty had been dedicated to William’s daughters, and Georgie loved the gruff, hulking manservant like a second father. He would see her through this madcap scheme— even if he disapproved.

She tugged the hood of her cloak down to stave off the drizzle. This place was filled with murderers, highway- men, forgers, and thieves. Poor wretches slated to die, or those “lucky” few whose sentences had been commuted to transportation. Yet in her own way, she was equally desperate.

“You are sure that this man is to be hanged tomorrow?” Pieter nodded grimly as he rapped on a wooden door.

She shouldn’t ask, didn’t want to know too much about the man whose name she was purchasing. A man whose death would spell her own freedom. She would be wed and widowed within twenty-four hours.

From This Earl of Mine by Kate Bateman. Copyright © 2019 by the author and reprinted by permission of St. Martin’s Publishing Group.

This was very enjoyable and entertaining. The female lead was strong and independent and came alive off the page. The male lead was a perfect match for her and every interaction between the two was thrilling and enjoyable. The plot was strong and it had a steady pace with no dull moments. I really liked this story and everything about it. Delicious. Action filled. Passionate. And entertaining from start to finish. Kate Bateman has a great knack for making her characters as alive and as colorful as her covers, which are stunning.  I look forward to the next books in the series, each of the bachelors deserve to find their equal and a woman that will keep them on their toes.