Log in with Facebook
or
Wrong email address or username
Sign up
Already on BookLikes? Log in!
Incorrect verification code
Please, check your email, the code to access your BookLikes blog was sent to you already.
Enter code:
« Back Send
back to top
Search tags: my-neighbor-totoro 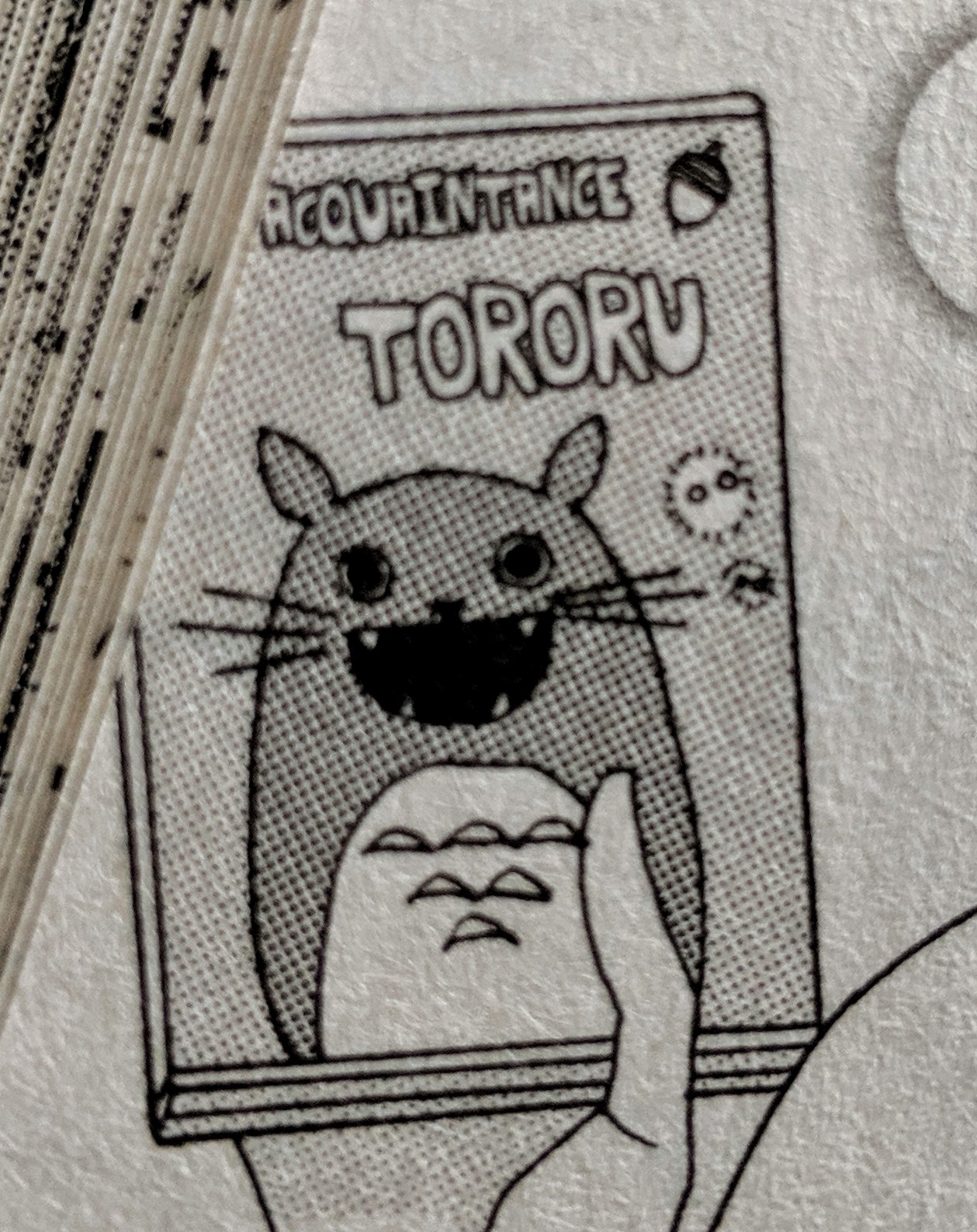 From Milk Morinaga's Secret of the Princess. This very thinly veiled reference to My Neighbor Totoro made me laugh.

Sorry for the terrible quality, it's a very tiny part of a larger panel in the manga. 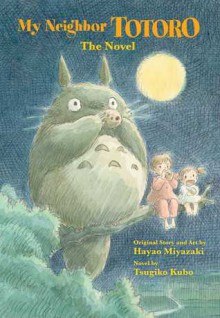 Mei, Satsuki, and their father, Tatsuo, move into a crumbling old house in the country in order to be closer to the sanatorium where their mother, Yasuko, is recovering from tuberculosis. The girls adapt to their new rural life pretty quickly, although four-year-old Mei doesn't respond well to being left with their neighbor while Tatsuo is at work and Satsuki is at school.

Both girls realize there's something a little strange about their house when they first arrive. They briefly spot little beings called soot sprites, and Kanta, the boy who lives near them, tells them that their house is haunted. Then Mei starts talking about having met a being she calls Totoro and who Tatsuo believes is a forest spirit. Satsuki longs to see Totoro too.

I wasn't sure what to expect when I read this. Would it be a stiff and soulless adaptation of the movie, or would it be able to hold its own in the face of the movie's sweetness? I'm happy to say that it fell into the latter category. Although I still prefer the movie, the book was a breeze to read, added things to the overall story that the movie couldn't, and had much of the same charm as the original movie.

(I should briefly explain that I'm most familiar with the English dub of the movie. I'm not sure if I've even watched it in Japanese with English subtitles yet. Some of the information "missing" from the movie could possibly have been translation decisions when creating the dub, editing the script to better match mouth flaps. I won't know until I watch the movie with subtitles, and even then translator decisions are in play.)

The book was more direct about explaining exactly why Tatsuo, Satsuki, and Mei moved out into the country, explicitly naming Yasuko's illness. There were more mentions about what Satsuki and Mei's life used to be like, back in the city, and even one portion of the book where they briefly went back to the city. Yasuko was slightly more in the foreground - the book included letters she wrote to her children while at the sanatorium. I got a stronger picture of her personality here than I did in the movie. She seemed like a dreamer.

In general, I'd say that the bones of this book were about the same as the movie. A few scenes were added, and there were more details about the history of the house the family moved into, and Satsuki's efforts to learn how to cook different foods over an actual fire without burning them. I really enjoyed these additions.

One thing that disappointed me a little, however, was that the fantasy aspects were scaled back. In the movie, viewers' first exposure to Totoro happened when Mei chased after a little Totoro and ended up finding Totoro's napping spot. All of this happened on-screen. These same things happened in this book as well, but for some reason the author chose to focus on Satsuki instead of Mei. Mei told Satsuki and her father what she'd experienced, but there was no evidence that any of it was real, rather than the dreams or imaginings of a child. The first on-page appearance of Totoro didn't happen until the bus scene. The ending was also altered slightly - the scene where Mei and Satsuki watched their mother and father from a tree didn't happen. I was at least glad that all the Catbus scenes were included.

The focus of this book seemed to be slightly more on the relationship between the two sisters and their barely-spoken-of fear that their mother might die and never come home, as well as the girls' growing independence as they adapted to rural life. It was lovely, but, as I said, I did miss some of the Totoro stuff. All in all, this was an excellent novelization that I'd definitely recommend to fans of the movie.

Several illustrations (black and white sketches with maybe a watercolor wash?), including a color map of Matsugo, the place where the Kusakabe family moved. The map also gives the exact year this story took place, 1955, so I suppose this could be considered historical fiction.

This was sweet. It had the same bones as the original movie, but parts of it were pretty different. There were fewer Totoro scenes, Mei and Satsuki took a trip back to the city at one point, and the final Catbus scene was a little different. I still prefer the movie, but I appreciated the more fleshed out bits (the history of the family's new home, Satsuki adjusting to life in the country, etc.). And Kanta was somehow even more adorable in the book than he was in the movie.

Halloween Bingo: I'm using this for the Terror in a Small Town square, which amuses me to no end. Totoro, the Catbus, and the soot sprites give the story its supernatural elements, and nearly the entire thing takes place in a small rural community.

The translation is blessedly smooth. So far it's following the movie pretty faithfully, but a few details here and there have been fleshed out. The house the family moved into has more history to it than was covered in the movie, and Mrs. Kusakabe's illness is explicitly referred to as tuberculosis, whereas I don't recall that being mentioned in the movie (in the English dub at least, so leaving out that detail could have been a translator decision).

This should be a quick read.

From what I can tell, the movie came first and this is a novelization. Considering that the visuals are part of the movie's charm, I'm guessing this will feel like the lesser version of the story, but I'm still looking forward to it.

It's looking like the weeks before my vacation will be filled with library books.