Log in with Facebook
or
Wrong email address or username
Sign up
Already on BookLikes? Log in!
Incorrect verification code
Please, check your email, the code to access your BookLikes blog was sent to you already.
Enter code:
« Back Send
back to top
Search tags: right-book-at-the-right-time This series keeps going in weird directions, and I kinda dig it. I don't know how kids today would handle this, but adult me was taken in.

'Many Waters' is set some years before 'Swiftly Tilting Planet', likely the winter after 'A Wind in the Door'. The twins, Sandy and Dennys, are returning from an afternoon on the ice to an empty house. Their father is away on business and their mother has taken Meg and Charles Wallace to town for a doctor's appointment. Being teenagers, they're hungry and set about making a snack. The problem is they can't find the cocoa, and so head into their parent's lab to raid the stash there. They don't notice the "experiment in progress" sign on the door and fiddle with a computer.

The boys are transported to a desert, luckily there's an oasis in sight, but the journey is hard for them and they wouldn't have made it except a local aids them with some help from a mammoth and unicorns.

Yes. Things are getting weird. This is good.

Of course, certain editions of this give away the other shoe before it drops either on the cover or in the back-cover text: the boys are rescued by none-other than Japeth, one of Noah's sons. Yes. That Noah.

The book is about the twin's recovery from their ordeal in the desert, their adaptation to the unexplainable universe, and their first adult brush with love and loss. The conflict between the Nephilim and their former kin the Seraphim make up a large part of the plot as well.

This made me remember my early Sunday school lessons about the flood and other early heavenly destructions. The flaw that the destroyed somehow deserve their fate still stands out. L'Engle's only real failure in this book is her attempt to soften the tragedy of the flood with certain plot devices I won't go into. All in all an interesting book.

Next: 'An Acceptable Time' The prologue in this one gets right into action. A historical backdrop with the conflicts from the time of Charles II is established. A woman is pregnant and fears that her child will be deemed the son of a traitor. Her husband is missing, perhaps captured. In desperation, despite the dangers involved, she turns to a local witch.

When we start the story proper, it is modern day. In many ways it reads like a typical YA Romance story about a girl about to start college. The father died, the family moved, and she's going to live at home while attending a small campus. She meets a few local girls, one of which takes an instant disliking to her and is really bitchy. So far ticking all the boxes, including spotting a cute guy.

However, there's a mystery to the cute guy. It takes quite a while to get back to the historic part of the story or for the time travel element to come out, but when it does the title makes perfect sense and the concept is actually rather intriguing and original. The writing is also good so although I'm not really into college settings, it kept my attention.

The second part of the story really drew me in and got very exciting, but then it stopped on a cliffhanger ending. I presume another book is planned as some of the salient points were never explained, like how the time travel aspect works, though there was a good opportunity. Also, a few inconsistencies in the characters began to emerge so though the writing itself is very good, the plotting left a lot of holes and the ending was far too abrupt. 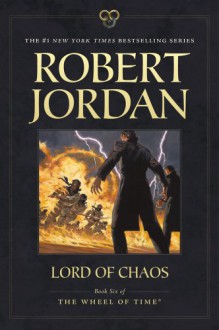 I have another review of 'Lord of Chaos' floating around, a fragment from my last full reread of the series in 2009. I was not impressed, and while there are still problems with the series - the first reluctant nod to homosexuality goes to a villain first of all - but as I've been saying this latest reread has been refreshing and addictive. I missed these books.

'Lord of Chaos' takes place over ten or eleven days, but a lot of stuff is happening so I won't complain. Rand gets overconfident in Andor and Carhien and ends up in serious trouble.

Nynaeve, Elayne, Birgitte, Gareth Brynne, Min, Siuan and Leane are in Salidar with the Rebel Aes Sedai, the former trying to adjust to being Accepted again and making 'discoveries' - Nynaeve still has a block on her channelling ability, which holds her back. Gareth is building an army to take the White Tower, Min is preparing to go back to Rand, and Siuan and Leane are continuing to adjust to being cut off from the Power.

Mat is once more on his own, his initial desires to escape responsibility have led him to become head of his own private army.

Perrin, a hero and Lord in the Two Rivers now, heads out with another army and Faile and Loial and Three Aiel to join Rand - who he senses needs him.

There are plots within plots and this book in many ways creates a pressure cooker. The sheer number of characters - I'm not even bothering inserting the villains and Daes  Da'mar nonsense - to move slows the narrative down. The existence of Traveling begins to ease this problem somewhat, but too many plot-lines for slim reasons don't take advantage of this.

This is still mostly a book to get through, but I found myself enjoying the pace.

Next: 'A Crown of Swords'

Previous: 'The Fires of Heaven'

Jordan's epic continues to thrive, but there are signs of it faltering under its weight. 'Fires of Heaven' finds our victorious Nynaeve, Elayne, Thom, and Julien making their way out of Tarabon assured that they had left it better than they found it. Alas....but that's another plot-line. Nynaeve is hardly a fan favorite, but I've always liked her and a tonal shift in her narration is Nynaeve at her most enjoyable. She also scores a major personal victory.

Anyway, Rand, Jasin, Mat, Aviendha, Moiraine, and Lan are headed out of the Waste after the villainous Shaido, who have quickly become a menace to the 'treekiller' nation of Carhien and everything and everyone else they run into. The changes to Mat and Moiraine's characters are particularly noteworthy.

Perrin, Loial, Faile and Three Aiel....nothing. They don't appear, so readers must presume that domestic bliss and the flowering of the Two Rivers just wasn't interesting enough. Considering how toxic Faile and Perrin's relationship can be...I probably agree with Jordan on that.

Min, Siuan, Leane and Logain are still traveling incognito to find where rebel Aes Sedai may be gathering, but run afoul of someone who could help their plans or simply drag them back to a farm in chains.

Meanwhile, in Caemlyn, some really icky stuff is going on, and one of the most depressing character arcs in the series is swanning on down into the mud.

That last may be why this book has some tarnish. I've been loving the reread much more than I anticipated, but there's no getting around some unpleasant and barely plot-necessary happenings. Then again, the series still has some great moments (I for one loved the circus), more information from the Forsaken, big sea-change moments as Rand achieves more victories and yet also suffers great losses, and another spectacular finish. Though the plot-lines no longer converge, Jordan had a knack for pulling together enough of his plots to make gripping reading.

Next: 'Lord of Chaos' The events at Falme are only beginning to reverberate through the Westlands, few knowing the facts -  and few those people are - can deny that Rand al'Thor is the Dragon Reborn. Mat is being conveyed to The White Tower for Healing as quickly as possible by Verin, Nynaeve, Egwene, Elayne, Thom, and Hurin, the dagger and Horn by his side. Perrin and Min and Loial stay with Moiraine and Lan and the Shienarans to be near Rand. There is tension and they are waiting, for what Moiraine can't, or won't, say.

There is an attack and then Rand is gone. Readers won't hear from Rand for most of the rest of novel, his actions can only be speculated on and guessed at. We must follow the same clues as Perrin and co. to figure out if they are going to catch up with him.

The stakes get higher with each novel, and Jordan does a fair job of building suspense as one party, from Perrin's perspective, follow after Rand; Nynaeve, Egwene and Elayne become ensnared in a plot concerning darkfriends in the White Tower at the Amyrlin's behest; and FINALLY we get a POV from Mat. He could be a frustrating character sometimes, with all the machismo and womanizing, but his incredible luck along with ta'veren powers made him always worth reading. Egwene, Nynaeve and Elayne continue to grow as characters, and theirs is still my favorite plotline of the book, and the subtle shifts in their dynamic was a tidy setup for what was coming in the future. Jordan has occasional skirt-smoothing, arms-crossed-below-their-breasts, trouble with his female characters, they are a vital part of the structure of the story. This bears repeating as so many other authors failed to create stories as dynamic for any of their characters that Jordan does for his heroines.

The cast continues to grow, with only poor Hurin being trimmed from the cast (at least for a dozen or so books), but it does so organically and hasn't reached levels of frustration yet. 'The Dragon Reborn' features more encounters with the Forsaken, new shadowspawn, lore aplenty, and a terrific showdown at the end. It is the last book which has anything resembling a tidy ending until the big conclusions start going down at the very end. These first three books cemented my love of this series.

Next:  'The Shadow Rising'