Log in with Facebook
or
Wrong email address or username
Sign up
Already on BookLikes? Log in!
Incorrect verification code
Please, check your email, the code to access your BookLikes blog was sent to you already.
Enter code:
« Back Send
back to top
Search tags: werewolves-square 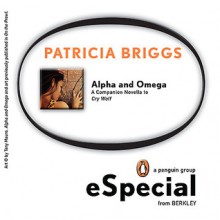 I ended up not reading all of the stories in "On the Prowl". I did back in the day, but since I wanted to read this for the "Werewolves" square for my second bingo card for Halloween Bingo 2017, I didn't feel the need to read all of the stories. From what I recall the first time, I was not that impressed with all of the stories, but ended up falling in love with the characters of Anna and Charles.

If you read the "Alpha & Omega" series, make sure you start with this one first otherwise you may be confused about Anna's background.

This story has Charles (the Marrok's son) coming to Chicago to investigate what is going on with a local wolf pack. A werewolf named Anna calls him and right away when Charles meets her, he feels a pull towards her. Charles's wolf decides that it will have Anna as his mate (in like five seconds by the way) and Charles's tells Anna how special she is among werewolves. We find out that Anna is an omega werewolf. When Charles meets with the local leaders, a few things come out about the local pack and Anna is left to decide to stay with them or follow Charles.

I really loved this book. There is some info-dump since in none of the Mercy Thompson books was anything ever spoken about omega werewolves to this point. We get to find out that Anna being an omega means she does not have to obey the alpha werewolf in her Pack. She also has an effect on other werewolves and can calm them down and push away any lingering mental sickness they may have.

I remember feeling awful for Anna when you read about how she was changed, what was done to her by members of her Pack after the change and it just left a bad taste in my mouth about werewolves in general. To this point I was more familiar with Adam and his Pack in the Mercy Thompson series.

Charles was a great hero to root for though I wanted to know more about his upbringing. We know that he is Bran's enforcer, but it seemed to me that he was a little lost until he met Anna. In later books we get to see how being Bran's enforcer affects Charles though so I was glad that Patricia Briggs brings that up in the later series.

The writing was typical Briggs though I will say that there was some repetitiveness in some places that I think show up again in the later story, "Cry Wolf." I was never so happy in my life when Briggs stopped writing about how Omega did not mean weak and she didn't have to listen to others. We got it. Please stop saying it in every story.

The flow was good though I thought the book ended on a weird note. I know when I read "Cry Wolf" after this though, that the action picks up right after the ending of this book though.

A great little story that you should read before reading the full length novels. 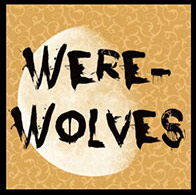 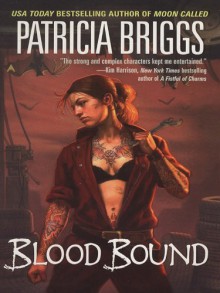 I was initially going to read this for the demons square for Halloween bingo, however, it includes werewolves and I decided, two birds, one stone.

If you have been following my reviews you know that I devour the Patricia Briggs Mercy Thompson books. I have all of the books either via ebook or one that I got in hardcover (never again, I realize I don't care for the feel of most hardcover books) and I tend to re-read my favorite parts of this series over and over again. One of these days I will get around to just posting a mega review or something. Until now, here is my review of book #2.

"Blood Bound" finds Mercy trying to get settled with the fact that she now is dealing with the fact that an old love has moved in with her (Samuel) and by the way, the alpha of the local werewolf pack is interested in her as well (Adam). If she didn't have to deal with vampires and a demon slaughtering people left and right she may actually get some time to repair some cars.

This book actually deals more with the vampires in the Tri-Cities than the prior one did. We have Mercy agreeing to help out her vampire friend Stefan which has her getting involved with local vampire politics with the head of the seethe Marsilia.  I do like how Briggs in her series let's you know first and foremost vampires are predators. They are not sparkly and friendly (well except for Stefan, and only the friendly part).

When the werewolves gang up to take out a new enemy everyone in Adam's pack has to deal with it too.

I do love Mercy. She has become one of my favorite urban fantasy characters. I can read about her and Kate Daniels (see Ilona Andrews) all day. I will say though that this book includes my least favorite thing ever, a love triangle. Thank goodness that Briggs deposes of that triangle in book #3. I am not a fan of who should I be with in my long running series, see Janet Evanovich. Also, Briggs does a great job developing Mercy through this series. We are only provided so much information about her, but we find out about things real time for the most part just as she does. I rather have that instead of a info dump.

My favorite characters are in this one, Adam, Stefan, Zee, and Samuel. I do wish that we got more Samuel in the later books since he kind of disappears after Silver Borne, Mercy Thompson #5.

I do love the writing in this series. I always think that Briggs can make dialogue really work. I also have to say the flow for this one works. We also get to see a new dimension to Mercy's powers besides shapeshifting. I will echo something another BL member has mentioned here before, Mercy has I think zero female friends, which is weird. I didn't realize that when I was reading the series the first time. But honestly, besides Honey (in the later books) most of Mercy's friends are male. Not that there is anything wrong with that, but I will still keep wishing that Mercy becomes closer to Charles's wife (see Alpha and Omega series) or other females such as Honey. I can see why she doesn't reach out to women more though since she is a male profession (auto mechanic) and her hobbies include self defense courses along with ghost hunting.

The setting of the Tri-Cities in Washington state is always a fun one to return to.

I did like the ending of this, but if you want to be wowed by this series, check out Iron Kissed, Mercy Thompson #3. That one almost wrecked me. It was really good.