Log in with Facebook
or
Wrong email address or username
Sign up
Already on BookLikes? Log in!
Incorrect verification code
Please, check your email, the code to access your BookLikes blog was sent to you already.
Enter code:
« Back Send
back to top
Search tags: 2014-Reading-Challenge When the Morning Comes is about a young girl in her Amish community. I can't remember the details of the story. I will give you what i can remember about it. I know it about Hannah Lapp. Does get what she wants or does she not.

She stays with her aunt for  bit and ponders about going to live the englisher. It the Amish term for outsiders. Will she goes back with her fiance and her family she left behind. Doe her fiance love her or not? You would need to read the book to find out. I know it a sweet story.

You learn about how the Amish live and her why of life. I am fascinated by it myself, so that is why I enjoy reading book about the Amish and Amish fiction. Cindy Woodsmall does wonders for her books. She also does a good job with this one as well. It just been years since i read the book that I honestly can't remember much. Damien + Sionn - HOT!!! HOT, smexy, adorable, mouthwatering...did I mention HOT!!! I adore these two men, I loved watching their relationship develop. I' only a fan of love at first sight or insta-love if it's done right and for me this was done right. The Attraction between these two men was instantaneous but they didn't act on it and suddenly fall into bed without any preamble. We got to watch as they spend time together, talked, shared coffee, went out, got shot at...you know shared those little day to day things that help to build a relationship.

As if Damien & Sionn weren't enough we got some Kane & Miki time not to mention Kane & Sionn's family. I love this bigger than life Irish clan. They are the family that we all should have. Donel is the best father ever and the fact that Brigit has all the men in her life wrapped around her little finger and terrified at the same time is both awe inspiring and laugh out loud funny.

Then on top of all these wonderful characters we had a story with a very interesting plot and one scary, screwed in the head assassin stalking Damien and trying to kill pretty much anyone he got his hands on.

The first book had me wanting more, this book has me needing more. Did I mention that I think I'm totally smitten with Connor already and we really on ly got a teaser about him. Oh, Ms Ford, you are a devious woman but thankfully I have your other books to help fill the gapuntil more 'Sinner's Gin' arrives...Cole McGinnis here I come. 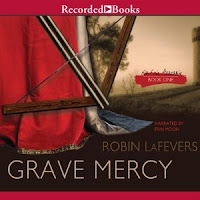 I liked this book more than I expected to like it, and while there is a lot of monotony to be had between certain events, I surprisingly found those quite intriguing and nice anyway.  Being that this book focuses a lot on history and politics of Brittany during the pre-Renaissance era, I was worried that I wouldn’t be able to enjoy it if only because I’m usually bored by books that are heavy with politics.

So, kudos to Ms. Robin LaFevers.  I really loved this book in spite of the political conspiracies and the drawn out history lessons--in fact, these were the things, aside from the characters, that I found most fascinating.

But anyway, as I had let this book sit on my mind for a long time (a very long time), and then subsequently went back and "skim-read" it (via audio book) to refresh my memory before diving into reading what I thought were the last two books in this series (there have since been two more books added to the series), I really don’t have much in the form of a review.  So I decided to just bullet-list my thoughts and then call it a day.

Actually, a lot of these notes and thoughts had been written back in 2014 when I first finished reading this book.  Following, I decided to wait until the last book of the then-trilogy was published before reading the rest.  Time ended up eluding me and I never got around to finishing the last two books until this time in 2016.


The Story:
Escaping the brutality of a forced marriage, Ismae finds sanctuary with the convent of St. Mortain who serves the God of Death.  She learns that she is blessed by the God of Death and that all the sisters of this convent serve Mortain as his handmaidens, meant to mete out his wishes as trained agents in the art of Death.

Ismae receives her most important assignment in the high court of Brittany where she comes across deeper intrigues of conspiracies and deadly games of treason.  Her initial assignment is to uncover a possible treasonous plot taking place at court.   Her overall mission is to serve and protect the Duchess.

Oh yea, and she meets a man named Gavriel Duval who, knowing what she has been trained for, is Ismae’s means of remaining at the court to complete her assigned mission.  There’s also romance, but it’s quite subtle and not at all in the way of the actual conflict taking place in the story.

Meanwhile, Ismae slowly learns that maybe there is more to being a handmaiden of St. Mortain than simply killing in his name, and that her teachers at the convent may not always know what the God of Death truly has plans for.

Final Thoughts:
I had decided that was probably time for me to fit in Dark Triumph and Mortal Heart somewhere (this will happen soon)--it has been a very long time since I finished Grave Mercy (see above introductory confession).  I need to be able to, like, read twenty books simultaneously and take about two months worth of vacation to finish my reading list.  Because while I found Grave Mercy to be immensely enjoyable, despite being a genre I don’t normally touch at all, I’ve noted that many reviewers have stated that the next two books are supposedly even more awesome.  And so I really should have made time to finish reading the next two books to join and bask in the glory of having read the His Fair Assassin series.

This is a book I would definitely reread over again, to be totally honest.  And it got me curious enough about the history of Brittany as well as the Duchess Anne to want to do some genuine research.  Of course, so far, I’ve only done a Wiki search... ". . . when  Lucy grabbed me on the street in Paterson that day, I couldn't understand how anyone would take hold of a stranger and pour out their troubles. But now I realized that people did it all the time. They called for help. And some people would answer, out of a sense of duty and a sense of belonging to the world around them. . .

If I could give something to Fleurette – – if I could give her one silent gift – – it would be this: the realization that we have to be a part of the world in which we live. We don't scurry away when we are in trouble, or when someone else is. We don't run and hide. . . "

Constance Kopp does the opposite of running and hiding.  It's 1914 and she lives alone with her two sisters in the house left to them by their mother.

It's 1914, and three women living alone "isn't done."  But they are unconventional, and are determined to take care of themselves without a man to do for them.

It's 1914, and there are plenty of men around who are only too happy to tell them how they should be living their lives.

it's 1914, and the recent labor strikes have left bad feelings behind, and dangerous men still look for trouble.  Constance and her sisters have had the misfortune to attract their attention.  Add in a kidnapping, blackmail, and personal assaults and this makes for a very exciting read that is also educational.

The Kopp sisters have financial worries, but they are irrepressible and irresistible.  I love them.  I'm kind of hoping that Amy Stewart will feel the need to make this an ongoing series.  It's based on actual events, and could easily end here; but it seems to me she has left the door open for a sequel, and I would love to read more about their adventures.