Log in with Facebook
or
Wrong email address or username
Sign up
Already on BookLikes? Log in!
Incorrect verification code
Please, check your email, the code to access your BookLikes blog was sent to you already.
Enter code:
« Back Send
back to top
Search tags: American-Revolution 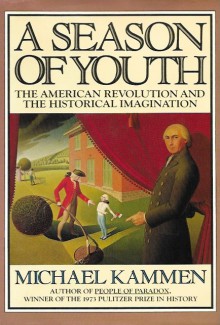 When the musical Hamilton premiered in 2015, it was hailed as a bold reimagining of the events surrounding the founding of the United States. What most audience members probably didn’t appreciate, though, was that it was only the latest in a long line of reimagined interpretations of the events of American independence. Those who did likely benefited from reading Michael Kammen’s book on the subject. In the first of a trilogy of studies he wrote on various aspects of the American historical imagination, Kammen recounts the evolving ways in which Americans remembered their revolution and what these changes reveal regarding the nation’s attitudes about its legacy for them.

Kammen begins by considering what he terms “the problem of tradition,” that problem being the absence of one throughout much of America’s existence. To outside observers living within the well-worn grooves of generations of traditions, Americans seemed to lack one. Though this would change, that change was gradual, and initially it was focused on the first defining event in the new country’s history. Though a natural choice it was not a conscious one, as Americans grappled with their revolutionary origins only as they began to slip away from them.

Kammen divides this process into stages. The first of these began with the Revolution itself, as its participants argued over the meaning of what they were doing. George Washington’s death in 1799 foreshadowed the passing of the “founding fathers,” and with them any firsthand verification of their intentions and goals. Though the last of the signers of the Declaration of Independence wouldn’t pass for another third of a century, Americans began to reflect more on their achievements and their legacy. The celebration of the Fourth of July was an integral part of this, but it evolved in the 1790s into a partisan tradition which persisted until the demise of the Federalist Party after 1815 ended their conflict over what the Revolution achieved.

By the 1830s, there was a general reverence for the Revolutionary generation and a common desire to maintain what their sacrifices had earned. Exactly what it was that they had earned, however, remained a subject of dispute. The burgeoning sectional crisis increasingly infected this debate, as again warring sides played up different aspects of the Revolution to suit their vision for the country. By the mid-1870s, the ebbing of this conflict led people to find within the Revolution a common point of unity, with considerations of its political meaning dropped in favor of celebrations of a hazy nationalism. This ebbed and flowed over the course of the twentieth century, with the scholarly consideration of the Revolution’s place in American tradition increasingly distant from popular (and apolitical) consideration of the Fourth July as little more than a national birthday.

Kammen recounts the developing place of the American Revolution in a series of chapters considering its presence in art, poetry, and fiction. These are presented separately by subject, making the book less of a sustained narrative than an interconnected collection of essays that can be read separately. On nearly every page he offers an intriguing detail or a perceptive analysis that reflects both his immersion in this legacy and his thoughtful consideration of it. Though some of his conclusions may seen dated with the passage of time, his book still rewards reading for its account of the development of American nationalism and how this was reflected in the nation’s culture over the first two centuries of its existence. I had read the first edition of Allan Millett and Peter Maslowski's book back when I was in college. While I can't remember what my impression was of it back then, I proceeded through the next three decades of my life without feeling the need to revisit it. Recently, however, I had cause to revisit it, and I'm glad I did.
Now in a third edition, Millett and Maslowski have been joined as co-authors by William Feis, a specialist in the Civil War era. For the most part, little changed beyond additional coverage of American military history up to 2014 and the elimination of the very useful bibliography from the first edition (supposedly it was moved online, but the link provided in the book is dead). Yet rereading it I came to appreciate just how excellent of a job they did in covering the military over the centuries of the nation's existence. It's especially impressive considering their scope: while most military histories are happy to confine themselves to accounts of campaigns and commanders, the authors have provided an extraordinarily well-rounded account that addresses policymaking, military-civil relations, and the development of military theory. In this respect their book is not just a military history in terms of an account of America's wars, but of the role of the military throughout the nation's history.
By the time I reached the end of the book, I had a newfound appreciation for the authors' achievement. While not without its flaws — leaving out the bibliography proved a mistake, while the two chapters on the Vietnam War are overdue to be consolidated into a single one — it is an impressive book that remains the single best work for anyone interested in learning about America's military and how it shaped the country it built and defended.
Civil War War of 1812 Military History American History Vietnam War first world war American Revolution Second World War korean war united states navy
Like Reblog Comment If you are going to visit Amsterdam and you love history and you only have time to read one book before you arrive, then read this one! Mr Shorto writes narrative history and picks out a number of lives of people who lived in Amsterdam and uses their lives to illustrate his take on the city's story. He not only researches the lives of the important historical characters, but also insignificant people of the time, sketching a life from old documents and registers adding colour and making otherwise dry topics personal. He takes this right into the present day with interviews of still living Amstedammers who have left their mark on the city.

The main theme of the book is liberalism and what that means in different times and contexts. In very broad strokes, what started, in Amsterdam, as economic liberalism, trade is king, expanded over the years to become social liberalism. An example of this is how the relative freedom of the press in the early 1600s, attracted people who could not publish elsewhere, like Galileo and most importantly, Rene Descartes. Descartes ideas were published, inspiring Baruch Spinoza, a Sephardic Jewish Amsterdammer, to learn Latin to understand Descartes writing. Spinoza applied Descartes principles to everything! Those principles took root, guiding people like Eduard Douwes Dekker who in turn inspired such amazing figures such as Aletta Jacobs.

As a tour guide I absolutely lapped up this book and read it a few times and even summarised it as the themes in the book lend themselves strongly to walking tours. I rather cheekily asked Mr Shorto on a tour that I had created based on the themes in his book and he accepted. I must say it was quite daunting having him on a small group tour as I am a huge fan of all of his work. He liked it I'm relieved to say and even furnished me with a quote to use when advertising Amsterdam private tours.

“Mark Law is hands-down the best tour guide of Amsterdam. And I don’t say that just because he uses my book. Honestly! He invited me to join a tour based on my book and, lo and behold, I learned a lot from it. He wove together my research and his own nook-and-cranny knowledge of Amsterdam. The result is lively, funny, and deeply historical.”

In the years that have followed I have read many of the books that Mr Shorto drew from when writing his book. What stands out to me, is his ability to draw out the most interesting points of a resource and package them entertainingly into his own work.

Amsterdam: A History of the World's Most Liberal City is a highly readable romp through Amsterdam's inspiring history. But there's more!

There are 3 other books by Russell Short that fit together. The 4 books were published in the order below and, whilst they are all good stand alone reads, I recommend reading them in the order published.  The Dutch Manhattan book reads like an action film, essential reading for anyone with ann interst in New York history. Descartes Bones traces the roots of the radical Enlightenment / French Revolution and Revolution Song, the moderate Enlightmentment as played out in the American Revlution.

The Island at the Centre of the World: The Epic Story of Dutch Manhattan and the Forgotten Colony that Shaped America (New York, Doubleday, 2004)

Amsterdam: A History of the World's Most Liberal City (New York, Doubleday, 2013) My latest interview is up on the New Books Network website! In it, I interview David Head about his book on the Newburgh Conspiracy and its place in the history of the new American republic. Enjoy!