Log in with Facebook
or
Wrong email address or username
Sign up
Already on BookLikes? Log in!
Incorrect verification code
Please, check your email, the code to access your BookLikes blog was sent to you already.
Enter code:
« Back Send
back to top
Search tags: Ellen-Hopkins The first words in this book captured the essence of this novel, “Guns don’t kill people, People kill people.” Following this conception, which I agree with, Ellen draws us into the lives of six individuals whose lives were affected by violence.
Although this novel is not written in Ellen’s typical style, it’s not written in long narrative form either but a form that’s somewhere down the middle. As Ellen introduced the characters, I saw how each of their lives were different yet somehow guns and/or violence entered into their life. I had a feeling as the story progressed that things were going to get much worse before they got better as their situations were becoming tense and for some of them, it felt as if the characters were looking for this type of excitement.
It’s the reality of Ellen’s characters and the accuracy of their lives that make this novel hit home. It’s a tough subject, a topic that we all know too well yet it’s one we can’t shut our eyes to. We want to be informed but where will that lead us?
As I turn on the TV at night, this loss of life seems to be a nightly occurrence. I don’t want to watch it but I know it’s all around me and I can’t shut it out. Why some individuals take aim at others and at themselves, sometimes over trivial things, I just don’t understand. It doesn’t have to be a gun that causes the fatality. It could be a variety of other means that causes this life to end, guns are just sometimes easier to obtain. For a killing is a killing, a death is a death.
Ellen shows us life, without blinders. She shows us why.
Like Reblog Comment I was very excited to read this. I love poetry and psych hospital settings when done well. The hyper-emotional style of much sick-lit fits well with teenagers, so all of this sounded worth a chance to me. I showed up early at the library on Saturday February 3rd to get the copy they'd set aside.

I've tried ever since to read this book. I just can't get through it. I realize I'm in the minority here, but I got nothing from it. Verse, which I normally love, may have stopped connection to any of the characters. It's not strict or tight scheme. It's just enough to elude communication either from the characters or author herself. The characters seemed flat and absurdly unrealistic at times. While I could follow the story, I was getting nothing from it.

I feel almost sure that as a young teenager, I might have liked this, so clearly it wasn't written for me, and my review is really only for the older folks who often read younger lit -- you may want to sit this one out. Let the kids enjoy this one on their own. (But then make sure they know the truth about some of the many many issues in this volume.) Quick review for a quick read that I picked up from my library's audio collection. Powerful and really wonderful character exploration, which is typical of Ellen Hopkins's books. Pattyn is a young woman living in a tightly knit religious community and abusive household. She strongly laments her inability to grow as a young woman - in relationships, in asserting herself among other things - as well as watching her mother being subjected to her father's fists. After a series of incidents in which she acts out, she's sent to live with her aunt and begins to know what it means to have a better life for herself, including being valued in a romantic relationship with her S.O. (Ethan). In the end, she's not prepared to return to the household that cast her out, yet she never really wanted to leave completely behind, and things only turn for the worst after that point. I'll admit it hit me like a punch to a gut and I couldn't shake the emotional upheaval it left within me long after turning the final page.

"Burned", like the other books of Hopkins I've read, went down so smoothly and quick for the overarching read - I really enjoyed the audio narration of the novel as well as the poetic form she uses to tell Pattyn's story. She captures Pattyn's thoughts, questions, fears, uncertainty, and emotion to the teeth, and I liked being able to follow her throughout. I thought her fears and concerns were front and center, making me feel her struggle, but I think there were opportunities of depth and debate (particularly around the religious community concerns, since Pattyn lives in a Mormon household) that were missed. I definitely look forward to reading the next novel in this series, though the cliffhanger ending makes me all the more anxious to get to it as soon as possible. 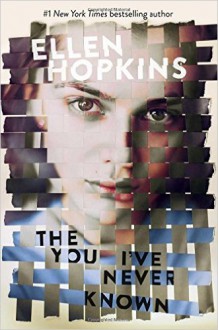 Quick review for a quick read. As per usual, Ellen Hopkins' works tend to feel like I've ran a sheer emotional gauntlet. The experience leaves me winded in the aftermath (in a good way). How does someone describe the whirlwind that is this novel? It's hard not to be drawn into it because you get so connected to the emotional journeys of the character within, how complex and complicated they are, and even hoping that - in the end - things turn out the best . I'll admit I saw the twists in the relationship between these protagonists coming, but even with that the "Aha!" moment felt satisfying to watch as the stories came together.

So: "The You I've Never Known" is largely a story about identity and the process of coming to terms with it. This happens multi-fold in the case of Ariel, a young woman who's spent most of her life on the run with her father. She's 17 years old and has never stayed in one place for too long, been in the go-betweens of her father and his numerous relationships that seem to come and go as the need arises. When I say need - well, it means a roof, food, booze, and sex in the case of the father. Ariel's father is a horrible douche, and this novel doesn't flinch at showing his flaws, but also the complicated relationship Ariel has with him. There are many times when she loves him and stays, but others where he abuses and uses her and she wants nothing more than to go.

But Ariel finally finds a place where she feels wanted, between relationships as she is a bisexual woman exploring relationships with a boy (Gabe) and a Latina girl (Monica). So things quickly become complicated as Ariel realizes she wants to finally give herself a grounded place (a steady job, to be able to have a car on her own, etc.)

The narrative trades spaces with Maya's narrative (distinguished between Ariel's narrative in prose form. Ariel's narration is in the form of poetry.) Maya is a woman who's escaped an abusive mother in Scientology and seeks a relationship with a man who's in the miliary, but certain events play out that complicate the relationship between Maya, her husband, and the baby named Casey whom Maya writes to in her entries.

I won't spoil too much more in terms of the story's events, but it definitely felt like it packed a lot of events and conflict into one story (9/11, homophobia, struggles with bisexuality/sexual identity, abusive relationships, gaslighting, etc.). That not to say that the experience doesn't read smoothly, I read this in a matter of about 3 hours or so and didn't put down the book once. Yet, there were parts of the story that I definitely feel like could've used more distinct ties and resolutions and somehow that left a bit of a void and an aching for certain character ties to be more intimate (though the character connections and establishments were solid for the most part).

I think this is as strong of an addition to Hopkins's bibliography as any of her works and I enjoyed the experience. I also recognize how brave it was for her to write this narrative given that portions of it were based on true events. Overall, I'd certainly re-read this narrative and thought it was well worth the time spent.

What a fantastic novel. I loved the edgy characters with their complex circumstances. Two stories were told simultaneously inside this novel and as I read, I anxiously awaited to see when they would join up together and become one. It baffled me as these two stories were written in two different time periods and my mind was racing to figure out the connection and piece this puzzle together. What great story telling by Ellen Hopkin, as she had me wrapped around her finger as I read this novel. Written in prose and verse, I found myself taking advantage of this writing style many times as my emotions played with the words that were written across the page. Hopes, dreams, lies, love and deception can hurt and they can also heal and I felt the power of these emotions as I read this novel. It was a large book, over 550 pages but it went fast. I have read one other Ellen Hopkins novel and I loved it and there are many others on my TBR list. I think it’s time to do a major Ellen Hopkins readathon, I think I might be emotionally ready.