Log in with Facebook
or
Wrong email address or username
Sign up
Already on BookLikes? Log in!
Incorrect verification code
Please, check your email, the code to access your BookLikes blog was sent to you already.
Enter code:
« Back Send
back to top
Search tags: Kindle-Single Chasing the Ripper by Patricia Cornwell is a disturbing book with great research. I gave it four stars. There are several books in the world that are suppose to help children come to terms with death. Usually they concern the death of a pet or sibling, sometimes a friend. When I was child, and even as a adult, they usually missed. At one part there was something that felt fake about must of them, almost forced. That isn't really that surprising.

But if I had read this when I was a child, a teen, it would have changed that image of those types of books.

Lucretia is dealing with the illness of her friend Sunny as well as her own changing body. She is caught between times, as it is. She has a good home life - her family isn't rich, but LaValle does present a loving family - mother, brother, sister.

When Sunny returns home and a play date is arranged, Lucretia finds herself on an adventure, involving the Kroons - who inhabit the top most apartment that is never rented out.

LaValle writes women and girls so, so well. The interacts between Lucretia and her mother, between the girls, the use of the wigs. It's all so wonderful. And unlike some books the ending is a such a true ending, such a magnificent ending. It's such a beautiful novella - horror, emotion, life all swirled together and working wonders. 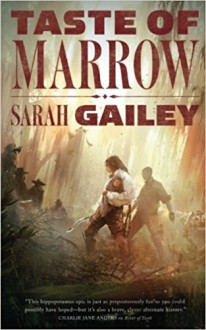 Basically, if hippos had been imported into America in the 1800s as a potential livestock animal, what would it have been like? This is based on an actual proposal that didn't quite take off as well as it does in this alternative history series. The characters are unique and not the usual "straight (implied) white cis-gender protagonist" cast. I found the second book, Taste of Marrow, to have a bit of a plot hole or perhaps I just missed a bit somewhere, but otherwise great series so far. Hoping for more!

From Taste of Marrow:

"Alone and lonely ain't the same thing at all... You of all people should know that. And even if they were the same - you would think that being alone and retired would be no different from feeling alone in your job. But you'd be wrong."

"You kill the first one, and it's not as bad as you thought it would be. You kill the second one, and it's not better, not exactly. But it's more not-so-bad. You kill the third one and you realize that you're good at it... You start to get a reputation, and you realize that people think you're great at it. You start to take real pride in your work. You start to make real damn money... You dream about contracts and you start tasting your own poisons to get a feel for how they land in the gut, and you love it. And then you're doing it because you love it, and you think you've really found your calling. You're so fucking good at this... So you keep on mixing poisons and blasting vault doors open until you could do it in your sleep. And then one day, some kid shows up at your door and says that they've heard you're the best in the business, and you think -  am I? ...You realize... that you're only doing the job because you're good at it. That you only love it because you're good at it. You realize that somewhere along the way, you forgot that you're killing people. You don't feel a goddamn ounce of the remorse that your mother's preacher said you'd feel if you ever took another life - you just feel bored... You feel bored by the murders. And you wonder who you are, that you can say that about yourself - that you're bored by the murders." Diane Light is the deputy district attorney and had been with the office for nearly eighteen years. Currently, she is back in the courtroom in front of Judge Stone. They are here due to a little girl Kylie, who’s father biological father Kyle Chance seeks to get his daughter returned.

The State moved to terminate parents rights ten months earlier after the police learned the parents had permitted the child to be sexually abused in exchange for drugs. She was less than two years old when this occurred.

The client claimed he was getting clean and he happened to be estranged from the wife when this occurred. She was placed with a foster mother. Kylie was not an easy child to place. She had experienced trauma. Plus she had been born drug-affected.

Undernourished and suffered from PTSD. Now the foster mother, Janice has been killed by a drunk driver.

Diane must keep this little girl from going back to her biological father— Even if she takes her in herself. She could be an excellent mother to the little girl. She cannot allow this precious little girl to go back to this monster. Even though the courts primarily blame it on the mother.

She had asked for a transfer out of the major-crimes until (a coveted position) to the family court. This way she could remain in Kylie's life. Who else would protect her?

Her husband, Greg had left her for another woman, who now had his own family. She formerly was fat; currently, slim. She did not have any children. She was forty-four. She could not comprehend how it could be in Kylie’s best interest to live with a man (now a janitor), who sold her a two-year-old to support his heroin habit?

If she can only get "Matt the Cat" (a disgusting street informant) to catch Kyle — dealing drugs before their next court date. He kept his ears and eyes open for information that he could trade for a get out of jail free card.

How far will Diane so go to make sure he never sees this innocent little girl again?

I adore novellas, and this evil twisty one was perfect to set the stage for THE WIFE. I have pre-ordered and anxiously awaiting Jan 23, 2018. (Narrated by Xe Sands)! Listen to Clip.

THE WIFE is about a caterer (a single woman with a son), who marries her prince charming. Now a famous author and consultant he is accused of sexual harassment. One of the girls goes missing. However, the case may now bring secrets from the wife's past to light.

I am enjoying all the upcoming new releases in the domestic suspense/thriller genre focused on the wife (secrets of marriages). With Burke, there is always a tantalizing story to be told. Can’t wait. In the meantime, visit with Kylie and get a peek at THE WIFE.

“[A] page-turner.... Classic domestic-thriller elements—the too-perfect couple, the unreliable narrator, the troubled past—are given a good workout in this satisfying round of ‘Who’s the Psycho?’”— The Wife Kirkus Reviews

I pre-ordered this book (something I very very seldom do) because I enjoyed the first, River of Teeth, so much.  It was fresh it, it was different, it was intriguing and it was well written and peopled with lovely characters.  This book, Taste of Marrow, was still all that, but at a lower level, I'm afraid.

Now, both books are novellas and I honestly think the story suffered from that in two ways.  First off, I felt that the story over both needed more fleshing out.  I wanted more... depth?  No, because what's there is plenty deep enough, but it just seemed that I wasn't getting the whole story as I should be.  I wanted more meat.

And secondly, I don't know why it had to be split over two novellas.  The first half of this one, I didn't really understand why one of the main characters was so manically obsessed with finding one of the others - big love notwithstanding.  I still don't get why it was so manic and I suppose I'd have to go back and read the first one again to see.  And I only read that one in May!  Anyway, put them both together in one normal sized novel - it would only be 75K words or 260 some odd pages.  Not even CLOSE to epic.  *LOL*   I also had trouble remembering why one of the bad characters was so important to the whole story.  So yeah... a single novel please?

The other thing that I found bothered me again was the gender-neutral use of the pronoun 'they'. It's bloody confusing, I'm sorry.  I apologise if that sounds insulting in anyway.  I have absolutely NO problem with gender-neutral/fluid people.  It's just that the word, after 55+ years of reading and 60 years of talking indicates more than one person to me.  I was confused so many times looking for the second or other people in the scene.  It brought me up short and took me right out of the story.  Which saddens me because I had to take off a .5 star for that because it did impact my enjoyment of the book.

So yeah, I was somewhat disappointed by Taste of Marrow.  I do hope the author continues to write in this universe however, and maybe even with some of the same characters.