Log in with Facebook
or
Wrong email address or username
Sign up
Already on BookLikes? Log in!
Incorrect verification code
Please, check your email, the code to access your BookLikes blog was sent to you already.
Enter code:
« Back Send
back to top
Search tags: Liz-Carlyle 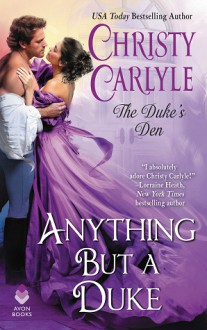 Second in the Duke's Den series that follows three friends who invest together, Anything But a Duke follows the one without a title, Aidan Iverson. He's been able to rise from a childhood where the mother he can't remember left him and his sister and amassed great wealth. What he can't seem to overcome is the snobbery of the ton and certain doors remain closed to him. He decides that marrying an aristocrats daughter is his gateway to all these doors.

Diana doesn't want to get married and is trying to keep her family afloat by creating an invention that members of the Duke's Den will want to invest in. Her and her mother come to an agreement that if by the end of the month, if her invention doesn't become profitable, she will have to marry. When a chance encounter has her rescuing and kissing a mystery man, who turns out to be one of the investors she's supposed to impress, her world gets shaken.

Diana Ashby drew him. She always had. Her confidence. Her fearlessness. From the moment they’d met.

Aidan's plan to marry an aristocratic, while mercenary, did work as a ploy to achieve what he wanted. For having two friends of that world, a duke and and a marquess, I thought the story thread oddly underutilized them. It is set-up so that Diana, who is not nobility but has friends of that world, gets into a deal with him to try and set him up, while his side of the bargain is to get more investors for her. It worked but was also all a little coerced. There's a second thread underlying the romance one with Aidan searching for information about his birth mother and the sister he hopes escaped an orphanage fire. I thought this was rife for some great emotion but it was pushed to the side too much for me. Even when Aidan gets the answers he was searching for, the reveal fell a bit flat as character relationships in this thread weren't explored and Diana wasn't a huge part of this thread for Aidan to share with her. I did believe in why he fell in love with Diana but again, the emotional moments where he is choosing her over his ambition, fell a bit flat.

Every moment that they shared, every detail they revealed, made her want more.

I also would have liked a bit more of Diana's family relationships explored, especially with her mother or maybe a flashback or two with her father. Her father seemed to be like an absent minded professor, except with inventing. Part of her wanting to succeed was to show her father's pursuits weren't all a waste of time. We get a pretty good feel for her relationship with her twin brother, a seemingly wastrel but sticks up for Diana but her relationship with her mother was fairly blank. We know, because of their money issues, her mother is pressuring her to get married but the mother doesn't really appear on the pages and I missed feeling that aspect of Diana's life. While I believed in why Aidan feel in love with Diana, I didn't believe in it as strongly from Diana's side. He treats her well, the biggest being he embraces her inventor side, and she finds him attractive but I just didn't get see or get a handle on Diana developing feelings for him.

“I remember our deal, Diana.” He slid his hand from hers slowly and there was such disappointment in his gaze that her breath tangled in her throat. Moving past her, he strode toward the room across the hall, but midway he stopped and glanced at her over his shoulder. “Perhaps I’m just not content with the terms anymore.”

As I mentioned, Diana and Aidan's deal, he introduces her to investors to push her vacuum prototype and she introduces him to ladies of the nobility to find a wife and if she doesn't succeed in finding him a wife she must marry him at the end of the month, was a pretty coerced story plot. At the end, there is some angst where I didn't understand at all Diana's reluctance or refusals, that made it feel even more forced. Everyone is likeable and the story is nice but not a lot new here and all pretty sedate. If looking for a quieter, tried and true formula romance, this would be a nice pick. I'll be looking forward to the third in the series coming up where Aidan's roguish marquess friend will be finding love.

Aidan held her gaze as he slid his suit coat from his shoulders, laid it aside, and rolled up his shirtsleeves. “I’m at your service, Miss Ashby.”

Look at this beautiful purple cover!

Pre-Order Link Anything But a Duke by Christy Carlyle

(These are some of my favorite cupcakes I make, very yummy!) 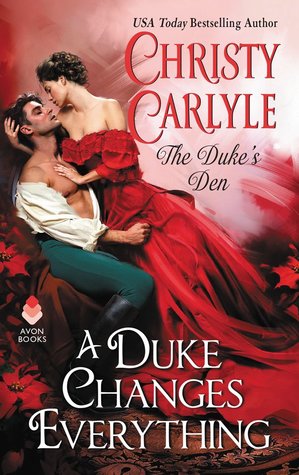 The Duke's Den #1, Great story, great characters, great setup for the series. Nick Lyons was born the second son of a Duke but his father hated him never believed that he was legitimate; it wasn't true but his father made his life hell. It got so bad His mother had to run away with him to keep him safe. Now Nick is a self made man co-owner of a gaming hall and much to his dismay he's the new Duke of Tremayne. Thomasina  "Mina" Thorne was raised like a lady she on the other hand had other plans. Raised by her father the Steward to Enderley Castle and was taught everything she needed to know to run the land; her father also instilled in her an unwavering sense of loyalty to the land and its people so much so that when he died she seamlessly stepped into his role. Nick hates Enderley Castle it's filled with nothing but bad memories he plans to liquidate its assets and lease the house to the highest bidder but then he meets Mina Thorne.

Overall, I really enjoyed this one. I loved all the internal conflict that both Nick and Mina deal with. Nick with his memories of the house and Mina with her sense of duty to the house despite her own dreams and then them dealing with their feelings for each other and their very different stations. Life and love requires some tough decisions to be made. How do you choose between the things you want and the people you need? Nick and Mina find themselves caught in the the middle of their heart's desires and their life's ambition in A Duke Changes Everything. In a world full of people blessed with pretty things, sometimes it takes surviving the ugliest of circumstances to help make the right choice. Carlyle takes readers through the good, the bad and the painful to get to the meant to be.