Log in with Facebook
or
Wrong email address or username
Sign up
Already on BookLikes? Log in!
Incorrect verification code
Please, check your email, the code to access your BookLikes blog was sent to you already.
Enter code:
« Back Send
back to top
Search tags: Middle-school 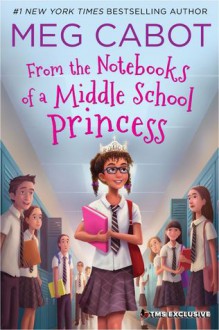 Here is a summary of what the book is about. Return to the world of Meg Cabot's bestselling and beloved Princess Diaries series in From the Notebooks of a Middle School Princess-this time through the illustrated diary of a spunky new heroine: Princess Mia's long lost half- sister, Olivia!

The only things about her that aren't average are her name (too long and princess themed), her ability to draw animals (useful for her future career as a wildlife illustrator), and the fact that she is a half - orphan who has never met her father and is forced to live with her aunt and uncle (who treat her almost like their own kids, so she doesn't want to complain).

Then one completely average day, everything goes wrong: the most popular girl in school, Annabelle Jenkins, threatens to beat her up, the principal gives her a demerit, and she's knocked down at the bus stop... Until a limo containing Princess Mia Thermopolis of Genovia pulls up to invite her to New York to finally meet her father, who promptly invites her to come live with him, Mia Grandmere and her two fabulous poodles... Maybe Olivia Grace Clarisse Mignonette Harrison  isn't so average after all!

I thought this book was very cute. I could see middle school kids reading this book. I thought it was written very well. I enjoyed the illustrations in the book.

I loved the fact that it was written in the diary format. I think it is good for a 12 year old girl to write her feelings down in a notebook.

The book is written from a 12 year old girls perspective and point of view. There is a sequel to this book called From the Notebooks of a Middle School Princess Royal Wedding Disaster by Meg Cabot. Which I will  read and review at  another time.

I had also, however, gotten a few things wrong. For one, I had originally written that The 5th Wave adaptation was releasing January 15th; a week later, I realized that the date was set at January 22nd. I edited the post, but it turns out that I wasn't the only one with a mistaken idea of the release date. One of my friends, only a week ago, said that she had seen something that said January 15th. I assured her it was the 22nd, but that was the last straw. Certainly, there are a number of articles about reading the book before you see the movie, yet some of them also include movies that don't have set release dates. I thought that it would be useful to create a calender infographic of the upcoming 2016 young adult and middle grade adaptations.
*Note: Not all of these are strictly Young Adult adaptations -- some are more "kidlit" (e.g. The Little Prince, Tuck Everlasting, etc.) and some had franchises in MG/YA but may not be anymore (e.g. Harry Potter & Cursed Child, Fantastic Beasts, etc.), but I thought that all would be relevant to the YA community.


2016 Young Adult and Middle Grade Adaptations
JANUARY:
MARCH:
APRIL:
MAY:
JULY:
OCTOBER:
NOVEMBER:
DECEMBER:
And for the rest....
RELEASE DATES NOT YET CONFIRMED*

*For these movies, the release date is listed as 2016, but the actual date has not been confirmed. Whether they will actually be released this year is yet to be determined.
ONGOING TV SHOWS:
*Can't make a calender of adaptations without nodding to the successful ones that are still running!
*Note: Since Alex Skarsgård is playing Tarzan and has bulked up for the role, I figured that his character was probably not meant to be like the Disney version anymore.
If you're wondering where I got all this information from, again last month, I gathered a round-up of adaptation news from the past six to seven months that I had covered in my bookish rounds posts. Those posts have all the links to trailers, posters, etc.
So those are the 2016 young adult and middle grade adaptations! (Or at least “relevant to the YA/MG community” since HP & Cursed Child, & Fantastic Beasts may not be technically YA/MG). Which ones will you be watching / seeing this upcoming year? Are you going to withhold your judgment on others? Let me know!
Fallen Before I Fall young adult The Little Prince A Monster Calls Stargirl The 5th Wave Anne of Green Gables A Series Of Unfortunate Events The Jungle Book The BFG allegiant Nerve YA lit The School for Good and Evil Fantastic Beasts and Where to Find Them Tuck Everlasting YA Books BOOK TO MOVIE ADAPTATIONS BOOK TO TV ADAPTATIONS 13 Reasons Why Let It Snow Shadowhunters middle school the worst years of my life 2016 young adult adaptations alice through the looking glass harry potter and the cursed child miss peregrines home for peculiars ashes in the snow
Like Reblog Comment

Middle school is full of many choices, some difficult and some seemingly trivial. This interactive, choose-your-own-adventure style book gives girls an opportunity to test out those different options and see where they lead. Full of wonderful illustrations, situations and endings, this book is a fantastic and educational read.