Log in with Facebook
or
Wrong email address or username
Sign up
Already on BookLikes? Log in!
Incorrect verification code
Please, check your email, the code to access your BookLikes blog was sent to you already.
Enter code:
« Back Send
back to top
Search tags: black-bolt 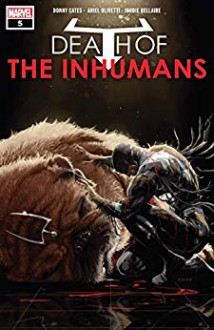 Marvel either needed to get more brutal, or less.   (And to be honest, given the rest of this series?   More brutal would have been the most appropriate!)   That being said, this felt... off.   The mixture of brutal and hopeful at the ending was gut wrenching - but didn't seem to fit the premise of this series, nor the promise held in the title.   I know I like a good brutal story about characters I love, although I'm not sure why, so I felt a little let down - and relieved at the same time.

So I'm not sure: I just wanted a little more oomph from this ending.   It feels like the mini-series wasn't sure where to go while doing something in particular - allowing certain characters to make it if you want to get particular - and then this.  I know comics are more well planned out.   Marvel cancelled Chelsea Cain's Vision series because it conflicted with plans for Viv in the Champions.   That is: Marvel wouldn't let Donny Coates do whatever he wanted.  I'm not sure if his vision for this conflicted with what Marvel wanted, or if this was a carefully crafted ending that just didn't work for me, but it didn't.   Overall, though, it's a five star series: even with the choppy ending, there was enough here for me to highly suggest this, from the lovely art to the plot twists that won't stop, plus the philosophical thoughts that were dropped in here.   (Yeah, it wants you to think about mortality and what you'd do in the most extreme situations.)   And the ending wasn't a complete mood killer, or even bad: I was just expecting more given the pace.

And I think that might be what be wrong.   This barrels along at high speed - and the stop is sudden and disorienting and that's making me cranky-pants and nitpick about the ending.

I think I'll be more okay with it when I reread this - and this is good enough to reread. 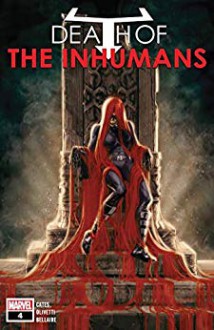 And they do here.   I've been wondering when they're going to kill people off with something called "Death of the Inhumans."  I mean, there was the huge death count in one, but very few of the royal family?  Esepcaily with them on all the covers.

Arguably the royals are the Inhumans franchise as they've always been central to that.   Is Marvel killing of other Inhumans?   The franchise?   Both?

And then they managed to bring some of the royals back.   So what's going on?    But I'm starting to think this might be more of a spiritual death: their hope is being killed off, and that's far, far more brutal than merely killing off the royals.   Just look at what they've done to Black Bolt for an example of something far more brutal than killing him off.   I'm still hoping for hurt/comfort there, but I think it's going to be hurt and then more hurt, and then me curled up into a ball at the end of issue five, the final issue in this mini-series.

But until I get there?   I'm loving this! The characters are making hard decisions, and I just feel so badly for them all.  I really, really just hope Black Bolt actually survives this mini-series at this point, although I think it looks like it's likely that he'll be killed off at this point. 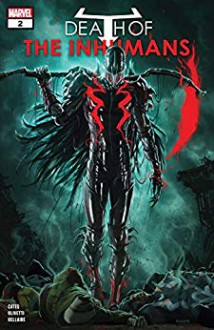 That ending is heartbreaking.   This is an excellent, tense read.

Black Bolt must make a decision: the Inhumans can join the Kree - or die.   So they've decreed.   When he sends Karnak to discuss the terms of surrender, things start getting more and more tense.   Beautifully told story, gorgeous and highly stylized illustrations that match this story perfectly. This is part of a series of posts reviewing categories in this year's Hugo ballot. I'll be discussing the entries, the voter packet, and my ballot. I've nominated and voted most years since 2011, when I figured out that all I had to do was join Worldcon to get to do so.

I'd only read 2 of these in advance of the finalist announcement. Two more are properties I'm familiar with from earlier volumes.

So Bitch Planet is definitely at the top, followed by Monstress and Black Bolt. The other three could go in any order, but maybe I'll just leave them off because I don't really feel strongly about them at all.