Log in with Facebook
or
Wrong email address or username
Sign up
Already on BookLikes? Log in!
Incorrect verification code
Please, check your email, the code to access your BookLikes blog was sent to you already.
Enter code:
« Back Send
back to top
Search tags: children-s-book

quote 2018-08-09 05:34
“Come here, little girl. I know what you want, little girl.” It was a rustling voice, scratchy and dry. It made Coraline think of some kind of enormous dead insect. Which was silly, she knew. How could a dead thing, especially a dead insect, have a voice?

She walked through several rooms with low, slanting ceilings until she came to the final room. It was a bedroom, and the other crazy old man upstairs sat at the far end of the room, in the near darkness, bundled up in his coat and hat.

As Coraline entered he began to talk. “Nothing’s changed, little girl,” he said, his voice sounding like the noise dry leaves make as they rustle across a pavement. “And what if you do everything you swore you would? What then? Nothing’s changed. You’ll go home. You’ll be bored. You’ll be ignored. No one will listen to you, not really listen to you. You’re too clever and too quiet for them to understand. They don’t even get your name right.

“Stay here with us,” said the voice from the figure at the end of the room. “We will listen to you and play with you and laugh with you. Your other mother will build whole worlds for you to explore, and tear them down every night when you are done. Every day will be better and brighter than the one that went before. Remember the toy box? How much better would a world be built just like that, and all for you?”

“And will there be gray, wet days where I just don’t know what to do and there’s nothing to read or to watch and nowhere to go and the day drags on forever?” asked Coraline.

From the shadows, the man said, “Never.”

“And will there be awful meals, with food made from recipes, with garlic and tarragon and broad beans in?” asked Coraline.

“Every meal will be a thing of joy,” whispered the voice from under the old man’s hat. “Nothing will pass your lips that does not entirely delight you.”

“And could I have Day-Glo green gloves to wear, and yellow Wellington boots in the shape of frogs?” asked Coraline.

“Frogs, ducks, rhinos, octopuses—whatever you desire. The world will be built new for you every morning. If you stay here, you can have whatever you want.”

Coraline sighed. “You really don’t understand, do you?” she said. “I don’t want whatever I want. Nobody does. Not really. What kind of fun would it be if I just got everything I ever wanted? Just like that, and it didn’t mean anything. What then?”

“Of course you don’t understand,” she said, raising the stone with the hole in it to her eye. “You’re just a bad copy she made of the crazy old man upstairs.” I'm currently re-reading this book (I got Scribd back again!!) and I came to this scene. It really is true what Coraline says and I think we forget that. Also just because you might get everything you want... that doesn't equal happiness. 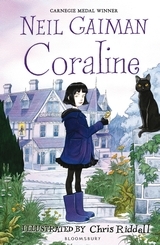 [This bit of wisdom from a Children's book (though I believe no matter your age, you should be able to read any book/books shouldn't have age limits) Coraline by Neil Gaiman.]

*Not sponsored:(I'm nobody) For those who don't know, Scribd is an ebook and audiobook subscription service. I really like it! They don't have the largest catalog, but enough to make the price worth it. $8.99 a month, and I think they might have a free trial. Heck, if you read or listen to one book, I believe you got your money's worth. Scribd's worldwide! You'll be able to access Scribd in any country unless local service providers or authorities have blocked it. Please note: not every title is available in every country.

Sharing this, because I wish I had known about it sooner!

review 2013-10-10 17:35
love this book. Mr. Munsch expresses so well the lesson that we all want our children to learn and that is to make sure they can take care of themselves. Don't wait for that knight in shinning armour because what you may find out when he/she arrives is that the armour is tarnished and they need you to rescue them. Well put Mr. Munsch, very well put. This is one lesson that we all need to learn and remember son or daughter. 1
review 2013-09-25 18:23
For anyone who has seen any of my reviews you're probably looking and going what the hell? Karen's lost her mind. Sorry no...well maybe but rumor has it that happened a long time ago. No this review is being done for two reasons:

#1 Because I was posting on someone else's review and the topic happened to be babies and it reminded me of this book. I have read this book probably upwards of 30 times and cried every single time. Why? you might wonder, if you've never read the book. As a mother, I can tell you it's because it is the sweetest most accurate expression of the love between parent and child and it grabs my heart and squeezes me tighter than any other story. Even though my child is 27 years old to this day he has that book and yes it puts tears in his eyes too. So simply put this book got 5 stars because there aren't a thousand or I would have given it that and more, I love this book.

Now for reason #2 this is Banned Book Week and if you are familiar with this book then you know at one time it was the centre of a bit of controversy. Some people tried to say that this book endorsed incest, to which I say crap. All this book endorses is a man who lost a child and probably more than many others realizes the enduring strength of a parent's love for their child and a child's love for his/her parents. He does this in a simplistic way that makes it comprehensible for children. Because it is after all a children's book. This book was written as a tribute to that child.

I guess my point at the end of all this is that Robert N. Munsch wrote a beautiful story about love and if only one voice had been heard I might not have gotten to share this story with my child and that thought makes me incredibly sad. So please before you decide that someone should or shouldn't have the right to read something; be it a book or a review ask yourself "what am I taking away from the rest of the world? And do I have the right to make that decision for so many other people?"
children's book Munsch
More posts
Your Dashboard view:
Quote All Reviews Text Photo Video URL Activities
Liked posts Top Tags
Press About Terms of Services Privacy Policy Contact Us Blog FAQ Patronaty medialne BookLikes for Authors Partners panel more...
Team Themes Docs API Blogs
Copyright © 2022 BookLikes