Log in with Facebook
or
Wrong email address or username
Sign up
Already on BookLikes? Log in!
Incorrect verification code
Please, check your email, the code to access your BookLikes blog was sent to you already.
Enter code:
« Back Send
back to top
Search tags: fair These authors give the readers quite another good series...'A County Fair Romance Book 3' in 'Spring Fling that will keep you turning the pages till the end. Â I liked how this story picks up from Book 2 in 'Winter Kisses' that involves Fallon, Justin and the other interesting men in her life. Â As you read through the story one will finds that there will be many issues and insecurities that will befall on Fallon as she finds out about her multiple pregnancy. Â What I really enjoyed about this series was all of the help that was their for Fallon whether she wanted it or not. Â Some of the story will have you laughing at some of the bantering that does take place, to even some moments that will leave the reader in tears with some of the family craziness to that deep love for one another in this well written dramatic romantic story. Will there be a HEA and what's Â next for Hopkins/Blackthorne family? I liked this series ...[A County Fair romance Book 2] 'Winter Kisses' as it continues so very well from the first series..'Stolen Moments.' With the holiday coming how will these two... Fallen and Justin along with her protective brothers manage the holidays. The story will take quite a turn when Justin ends of visiting New York during New Years along with Fallon, Pete and Nick. Now that will be one trip for them as they meet Justin's best friend Blaine. There will definitely be a twist in this read as Justin meets with his father and mother. That will be quite a trip and let's now leave out Justin's best friend Blaine. How will all of this effect Nick situation? Oh, well as the story goes on it will seem like the story will come together however, another twist will come onto the scene when Justin comes back home to Kentucky. Now, I will stop here and just say that you will have to pick up this good series to see how wells these two author gives the readers a well written series. Now, what will come next for the favorite two main characters [Fallen & Justin] along with the rest of the Hopkins brothers and a friend [Blaine] in the next series [A County Fair Romance Book 3] in 'Spring Fling.' These two authors[ S.I Hayes & J. Haney] have given the readers a well written series['A County Fair Romance Book 1 in 'Stolen Moments'] that flows together so well definitely keeping you turning the pages. All I can say is that they did a wonderful job in their collaboration giving the reader a good read. Truly, this was a beautiful romantic story that features Fallon Justine Hopkins and Justin Allen Blackthorne. What will happen when this feisty and sexy lady meet a handsome and sexy guy?

With these two main characters add the secondary ones and the reader will get a well developed, portrayed and believable read that will carry you through this wonderful story. Be ready for lots of 'emotions....from sadness, happiness, anger, excitement, worry, anxiety' to family drama that will at times have you even laughing at some of the antics of the read.

What will happen as this tattooed city boy who was running from his past drifts into their lives and meets up with the this twenty three year old country girl who had stepped into her mother's role in helping her brothers as well as her father? What will happen when that seems to fall apart and a big secret will come out? I liked how these author's brought out the over protectiveness that was showed by the brothers and even the father. After all is said and done will this family be able to pick themselves up and put things back together again a certain incident happens? Will Justin and Fallon finally achieve a HEA? Well, to get all of these questions answered and a lot more the reader will have to pick up 'Stolen Moments' and see how these two authors bring it all out so well to the readers. After the reader finishes with this series Book 1...let's go on to the next series...A County Fair Romance Book 2 in 'Winter Kisses' where we will get more from Justin and Fallon. Introducing the authors who will be appearing at the Tenby Book Fair (part of the Tenby Arts Festival) in Tenby, South Pembrokshire, Wales, on September 24, 2016 (the festival runs through October 1).  Rats, now I really wish I could travel this year ...

Do you want your fiction to teach you something new? And by teach, I don't mean life lessons, the themes about love being the thing you'd risk everything for and so on. I mean actual facts or cultural beliefs, like how Rick Riordan's Percy Jackson series, though it adds in a lot of other details, taught me about Greek mythology. "Greek mythology made fun" is like a tagline for that series, and for his others, Egyptian and Roman mythology made fun. I really enjoy those books, because they teach me something. I never had a Greek mythology class in school, so most of what I know comes from those books -- and I'm glad of it because so many people seem to write retellings of Greek mythology! 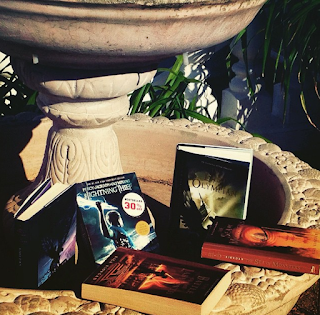 I once read that teachers wanted more YA historical fiction because they could assign those to their kids in parallel with textbooks and be able to discuss the history in a more engaging light with their students. Which reminded me of Robin LaFevers's series; though I don't know how real the God of Death was to people in that period or if that was something LaFevers changed for her world, it was fascinating learning about the kind of politics that would occur in a Brittany court.

And then that got me wondering whether each genre could teach you something different. I don't know about you, but I have different expectations for the underlying purpose for each genre. Dystopian fiction seems more philosophical, what have we done wrong; a criticism of our current society. Fantasy is about transporting us into a new world that's also familiar to us because there are metaphors and symbols of literary truths from our society. Contemporary seems about the lives we live and the immediate meaning to them. Historical, similar, but also how we lived then and whether we've come any farther. But those are just the expectations of different genres; can different genres teach you different things and would that work as well as for contemporary novels as it does for fantasy (i.e. Rick Riordan's series)? Magonia by Maria Headley had a lot of facts and a different historical perspective (the French medieval sailors' origin for Magonia), and I really enjoyed learning about that too. But again, fantasy, and Robin LaFevers's series has an element of fantasy to it too.

Then again, this is under the assumption that you would actually want to learn something from a fiction novel -- for me, the answer is yes if it's done well. Though I can also see why people would say no, especially when nonfiction is the place to go to learn specific facts, right?

Do you want your fiction to teach you something new? And do you think that certain genres are more suited to that purpose?