Log in with Facebook
or
Wrong email address or username
Sign up
Already on BookLikes? Log in!
Incorrect verification code
Please, check your email, the code to access your BookLikes blog was sent to you already.
Enter code:
« Back Send
back to top
Search tags: homophobia 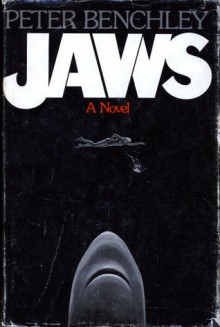 I've started to annotate my second book. Is it telling that this book was also written in 1974 like "Let's Play At The Adams" and I'm already have some issues with it? The book I am reading is Jaws by Peter Benchley. The only difference is though some things are angering me, I am enjoying the book.

***Spoilers for some cases of racism and homophobia in the book***

There was talk about something happening in the 50s, 60 and 70s. I can only assume the current story takes place in the 70s, but it reads earlier than that or am I just really "white privileged" because this book has brought up race several time in 77 pages. Like why bring race into it?

I know, because of the times this is set in this is how the people think of "the blacks" That is how they are referred as and of course they do the jobs of gardening, bartending, butlers, and maids. Also there was a black man who raped 7 rich white ladies, but when they put it in the paper, they would only say molested to save face for the small little town, and the women would never testify against the man out of shame? Shame in general or because he was black? (This wasn't in detail, just a case the cop remembered)

Also there was a homosexual slur on page 11, using the F word, which I hate. You know the one I mean. See, I know the author is trying to stay true to the time, but it still bothers me and I have to wonder if he goes around using the F word and calling black people "the blacks". Other than these things, I am enjoying annotating the book. So far the first movie is true to the book (minus all the racism ..etc) 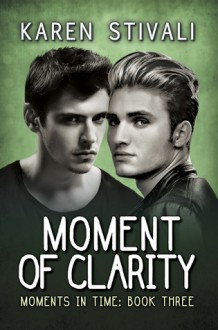 Good lord, the angst. The ANGST! And so much of it is unnecessary as hell.
The third book in the Moments In Time series finally brings a HEA for Collin and Tanner - or at least a strong HFN. However, the way to get there was... hard. In many ways. And not all of them pleasant.
Back at college, Collin and Tanner are not only faced with a homophobia and angst to the max, but they also need to find a place to live since their dorm was flooded. After reconnecting with his brother Sean, Collin can stay with him and his daughters in his house. Even Tanner is allowed to come, and they both enjoy the (somewhat) quiet, the relative privacy and the babysitting inbetween. Until the bitch-y and absent mother of the girls, Laura, shows up in all her homophobic and hysterical glory.
After that nice little meeting, the boys are back on the streets looking for a place to stay. Because Laura is suing Sean for custody and the boys don't want to "damage" Sean's image or destroy his chances of keeping the kids. Which is... yeah, no. What?! That woman abandoned her kids, hasn't been around for weeks and NOW she wants sole custody? Also, in what world would a big brother throw his little brother plus boyfriend out on the streets when he is starting to fight for custody? It was a temporary solution anyway to let the boys stay until they could back to their dorm, and while I am well aware of how fucked up custody cases can get, and how homophobic judges can be, in my opinion there was absolutely NO REASON to throw the boys out immediately and without looking for another place for them to sleep first. It didn't make any sense, and it pissed me off.
So then, in all their desperation, Collin and Tanner try to reconnect somewhat with Wendy (Tanner's former fuck buddy) and maybe stay with her and her roommates. And let me tell you, I couldn't care less about this woman. She's manipulative, she's mean, and one big self-centred bitch most of the time. Even when she was fucking up her friendships for all the wrong reasons, even when her douchebag of a cheating boyfriend finally went a step too far, I couldn't muster up a lot of sympathy for her. And I was even less impressed with how she handled all the drama. I just disliked her way too much.
The big drama also was too much for me. First you get the homophobic assholes who didn't even get expelled or suspended for criminal property damage - in a freaking college dorm! Then Collin, the martyr, completely looses his shit and is looking in the most unlikely place for help/a place to hide. Which was not only an overused and old plot device, but also didn't make a lick of sense.
But... I still couldn't stop reading. And I still can't just give the book one or two stars. Because for one, I really enjoyed Karen Stivalis writing style. It was engaging and smooth, and I actually enjoyed the writing as such. And while they aren't flawless, I liked the two MCs and their on-page time together. Tanner and Collin are sweet, sexy, sometimes too cute, sometimes a little heartbreaking, but always likeable as characters. I liked to read about their relationship and I enjoyed the parts of their journey that actually was between the two and the two alone.
I could have done with a better ending, though. While it wasn't a complete HEA, in other parts it was just too much. Too much of in an "everything is absolutely fine for EVERYONE"-way. I really didn't buy it. And while I know that there is a new book out in the series, I'm not sure I'm going to pick it up. I think I'm just finished with this series for now, no matter who's staring in the next book.
Karen Stivali Family drama homophobia M M Romance moment of clarity coa-ya-na moments in time
Like Reblog Comment 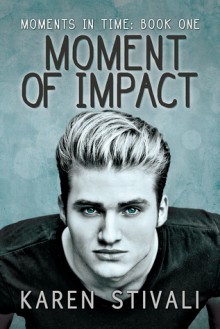 Outside is scary, inside is terrifying.

Collin Fitzpatrick did NOT have an easy life. Controlled by a fanatically religious mother, the missing locks on his bathroom and bedroom doors were just some of the small things that had a lasting effect on him. Being gay wasn't remotely up for discussion in his family. Even the thought of being intimate with a guy was completely out of the question. Consequently, Collin is living his life with an unhealthy amount of guilt, shame and anxiety mixed in, and the big crush he has on his straight college roommate, Tanner, doesn't help one bit. Quite the opposite, because after listening to Tannner banging his friend with benefits the whole semester, the one night he gets caught staring? Turns out Tanner isn't as straight as Collin thought he was, and his undesirable thoughts aren't as impossible as he was hoping.

This book surprised me a little. The writing was good, even though some of the dialogue and inner musings seemed a bit forced at times. But it didn't bother me too much. I had more problems with the fact that Tanner slept with his roommate while Collin was right there. I don't care if he thought his roommate was asleep or not. You just don't DO stuff like that. Especially not when you allegedly have a huge crush on the other person sleeping in the bed right beside your own. Just no.

Other than that I enjoyed the story. Collin never had it easy with his family, therefore never really accepted himself or at least got comfortable with his own body. His anxiety and shame burden him in almost every situation, his fear of discovery is almost all-consuming. No wonder that this kind of angst influences the bloossoming relationship with Tanner greatly, and not exactly in a good way.

This was a good, short gfy-ofy story, even though I got a tiny bit annoyed with the "near-death/severe-situation-changed-everything" plotline. It's not a bad formula, but it's been done more times than anyone can count, which si why more often than not it lost its' shine. I can understand it, I can read it and somewhat enjoy it, but in the end, I wish the characters could grow, change and make decisions without life-altering events forcing their hand. But I know that's me, so other readers might not be bothered by it.

All in all a good start of a series and I picked up the second installment out of pure curiosity right after I finished this one. 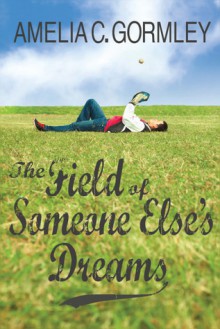 Well, this one covered a lot of complex issues in just a few pages.


Chris, a young and promising athlete, needs a scholarship in order to not leave college with a debt as high as Mount Everest. But a sports scholarship and coming out just doesn't seem to go together, no matter how much you're wishing for a loophole. Add the pressure of a man-ly man as a father and the guy you're in love with (and just can't shove back in the closet as if it's nothing),and Chris has more than one full plate to deal with.

And shit happens. And everything comes to a head. And we get to watch it all.

I enjoyed this one quite a bit. Chris' desperation on so many levels - career, money, love - felt real and understandable to me. Matt was a sweatheart, he tried so hard to do the right thing again and again without losing himself. Watching these two struggling through real life problems of new adults was heart-breakingly real. Plus, the whole story line with Chris' parents was a great illustration of the power of words & the power parents' actions and casual remarks have over their children and their inner strenght or strife.

I thoroughly enjoyed this one, and was very happy with the way things worked out. It definitely got me interested in reading the next Saugatuck story. 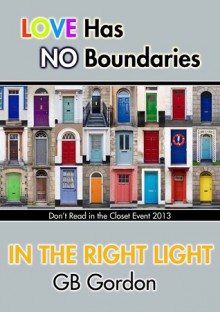 Oh my god, I loved this!

Danny was adorable, an open and sweet and wonderful grasshopper. He was so full of light and energy. Jamie was the almost complete opposite. Clearly unhappy with his life, trapped under the foot of his old man, jaded and underneath it all so very angry and scared because he couldn't get it right. Couldn't go back, couldn't go forward, he was just miserable every day. Until Danny and all his light and heart came into his life and threw him for a loop or three.

These two together made me swoon and giggle and my heart beat in a funny rhythm. It was the perfect mix of emotions and fun and hotness. I absolutely loved it and soooo wouldn't mind a nice, long sequel. *wink,wink,nudge,nudge*