Log in with Facebook
or
Wrong email address or username
Sign up
Already on BookLikes? Log in!
Incorrect verification code
Please, check your email, the code to access your BookLikes blog was sent to you already.
Enter code:
« Back Send
back to top
Search tags: mission-impossible 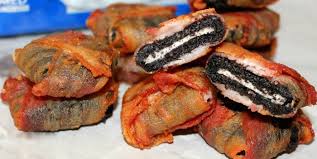 Yeah, you all clicked the link soon as you saw Bacon Fried Oreos, I know...

This book is one of Zahn's Star Wars novels. It takes place between Star Wars IV: A New Hope and V: The Empire Strikes Back, when Han Solo and Chewbacca have returned to their smuggling career. Although Zahn uses the characters' names and makes occasional references to Star Wars, this strikes me as gratuitous. Those references could easily be written out without any effect on the story.

This is a Mission Impossible or Ocean's Eleven story, set on a "galactic empire" type world. Han is hired to steal back some money that was stolen from his client. He assembles a team of thieves for the project, and discovers his target is an organized crime lord who also holds blackmail records that may be even more valuable. Zahn sets up a complex set of obstacles for Han to overcome and delivers an equally complex set of solutions. The characters occasionally stop and explain the convoluted relationships within the crime and why their actions are clever. Zahn does not let us in on some things Han knows, which is a technique that happens to irritate me. At times, it all seemed too cute, but the action moves right along. The epilog offers some of those missing ties back to Star Wars and sets up for the next novel. My e-copy also included 190 pages of excerpts from other Star Wars novels.

As long as you're not expecting a continuation of the Star Wars story line, this is a good book for those who enjoy the Mission Impossible sort of story.